Foreword:  If it weren’t for picture post cards, think of all the local history that would be lost forever!  Vintage post cards are indeed a treasure trove and those moments preserved in time offer us a glimpse into what life at Stone Harbor was like 75 to 100+ years ago.  Come one and all, and discover more of the unique and enduring aspects that lured so many folks to flock to the South Jersey resort community known as Stone Harbor.  In addition, various personal post card messages written by vacationers further illustrate for us what it was like back then.  So buckle up and prepare for yet another journey into the past using picture post cards.

Introduction:  This account will highlight 12 post cards that depict scenes from the latter 1910s to the 1980s related to fishing at our favorite seashore resort, Stone Harbor, New Jersey. 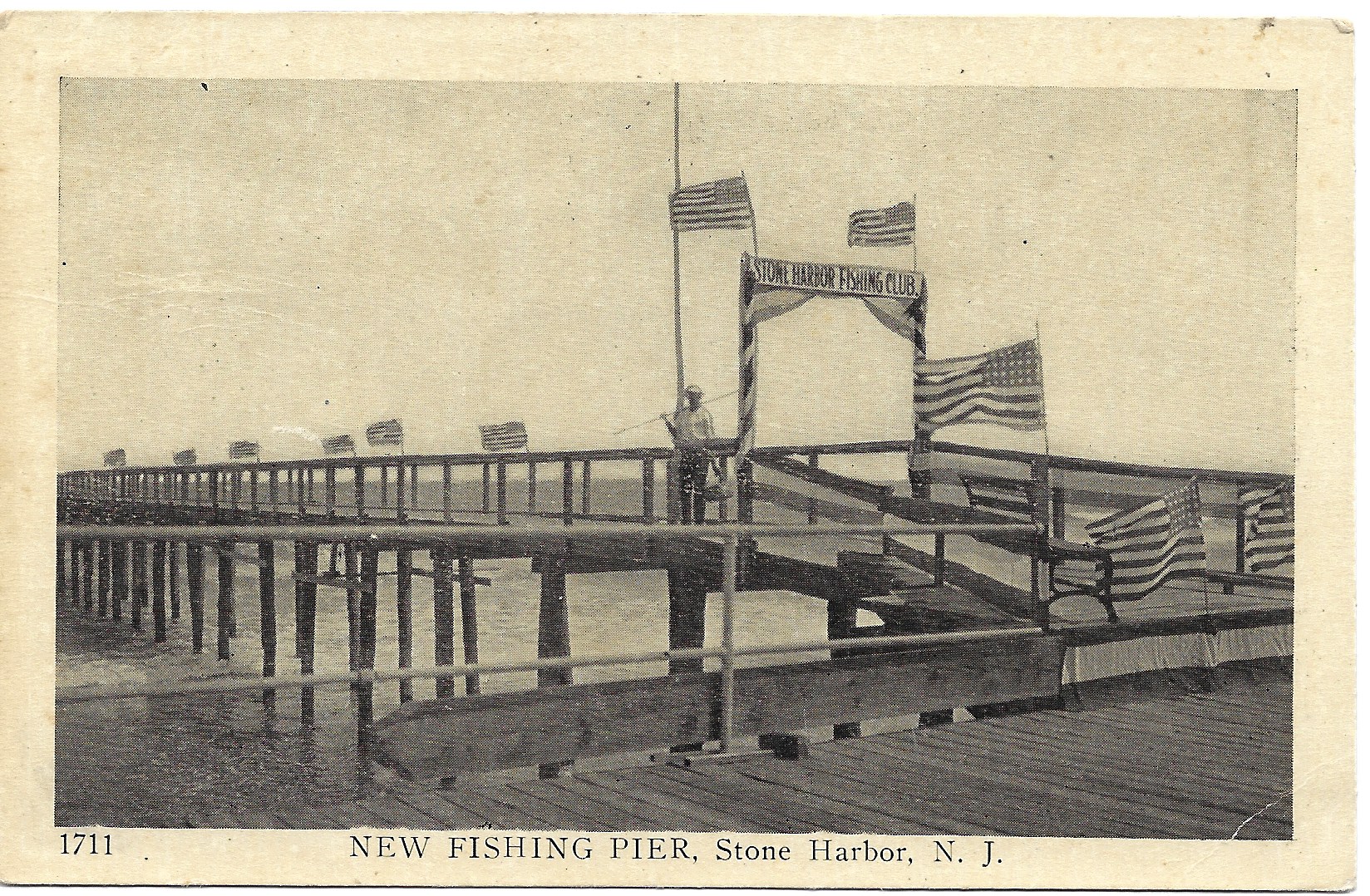 Our story begins with the festive opening in 1921 of a private fishing pier at 86th Street.  This pier was apparently built and financed by a group of about 50 men and it extended almost 500 feet from the boardwalk out into the ocean surf.  The caption for this post card is “New Fishing Pier” and clearly we can see the decorations including numerous American Flags and red, white and blue bunting promoting this new structure which became an extension to the Stone Harbor boardwalk that was dedicated in the year 1916.  This structure became a very popular spot for ocean fishermen and standing at the entrance to the pier is a man posing for this photo holding his fishing rod over his shoulder along with his tackle box. 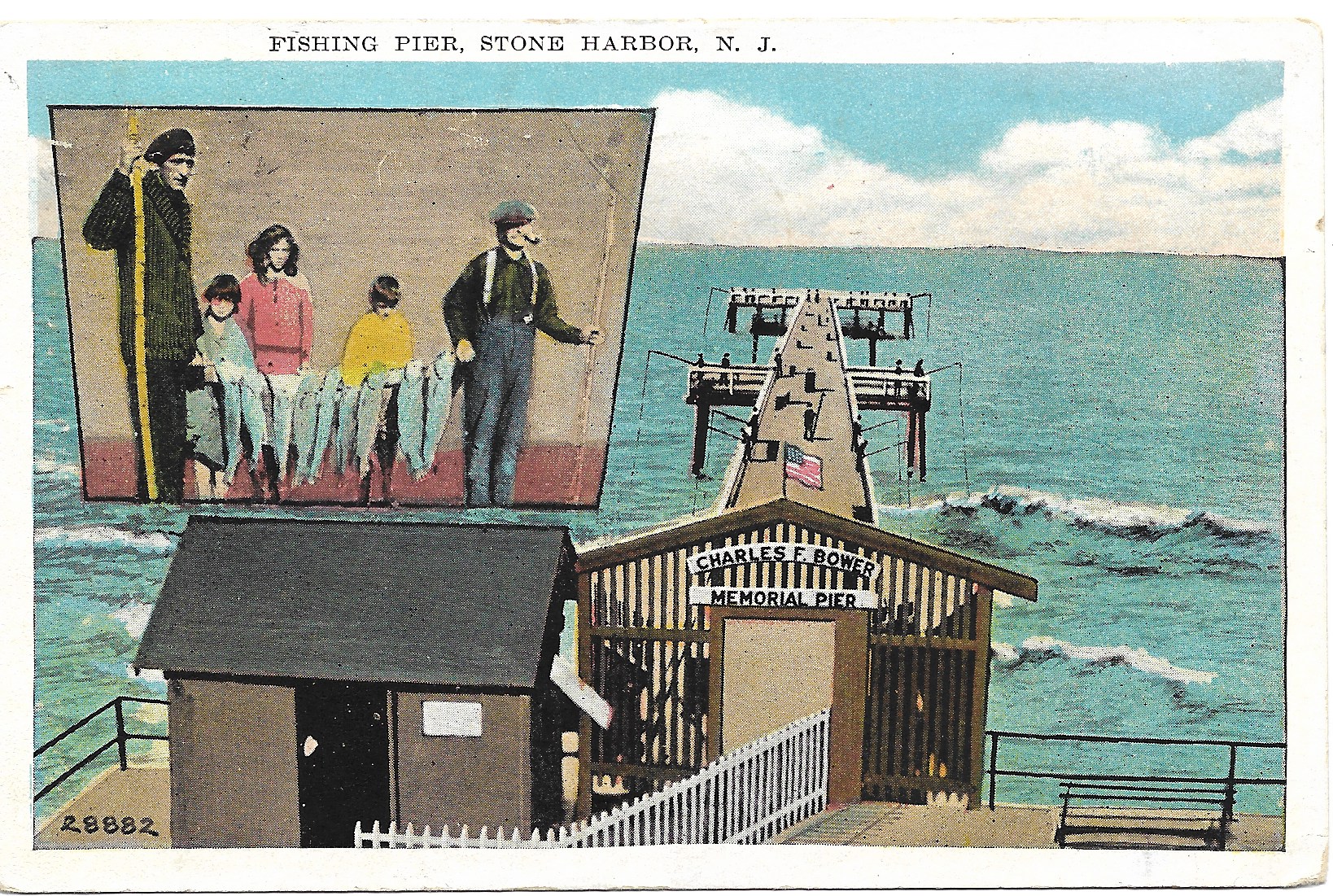 This next image reveals a striking dual image format with a photo inset simply entitled “Fishing Pier.”  The notable box superimposed in this scene shows what appears to be 3 children flanked by 2 fishermen proudly displaying their “catch-of-the-day”.  However, the predominant or main view featured on this vintage post card depicts the “Charles F. Bower Memorial Pier” that was connected to the Stone Harbor boardwalk.  Bower was a celebrated member of the borough council from 1915 to 1918 and was also known for his dedicated service to the early establishment of a Mayor-Council type of governmental structure for Stone Harbor.  This very impressive pier with its two conspicuous and expanded platform areas for accommodating more fishermen would be named in honor of him for his good deeds.  Notice also there is even a bait shop conveniently located at the entrance to this fishing pier.  Sadly however, the Great Atlantic Storm of 1944 would be responsible for the destruction of not only this particular fishing pier but the entire Stone Harbor boardwalk as well.  This postally used post card bears the following penned message which might be of interest to our readers: “Hello Pop,  Just arrived here.  When do we eat?  This is the way to catch them.  Boy you should be here to help me.” signed “W.J.W”.  At this point allow me to make an interesting observation and share it with you.  This very post card bears a JUN 23, 1946 Avalon, N. J. postmark.  Why is that even worth mentioning you might ask?  Well, that means that this very post card was still available for sale and was being sold for correspondence and mailing purposes almost 2 years after the fishing pier shown here had actually been destroyed by the big storm in early September of 1944.  Thus picture post cards continue to tell the story. 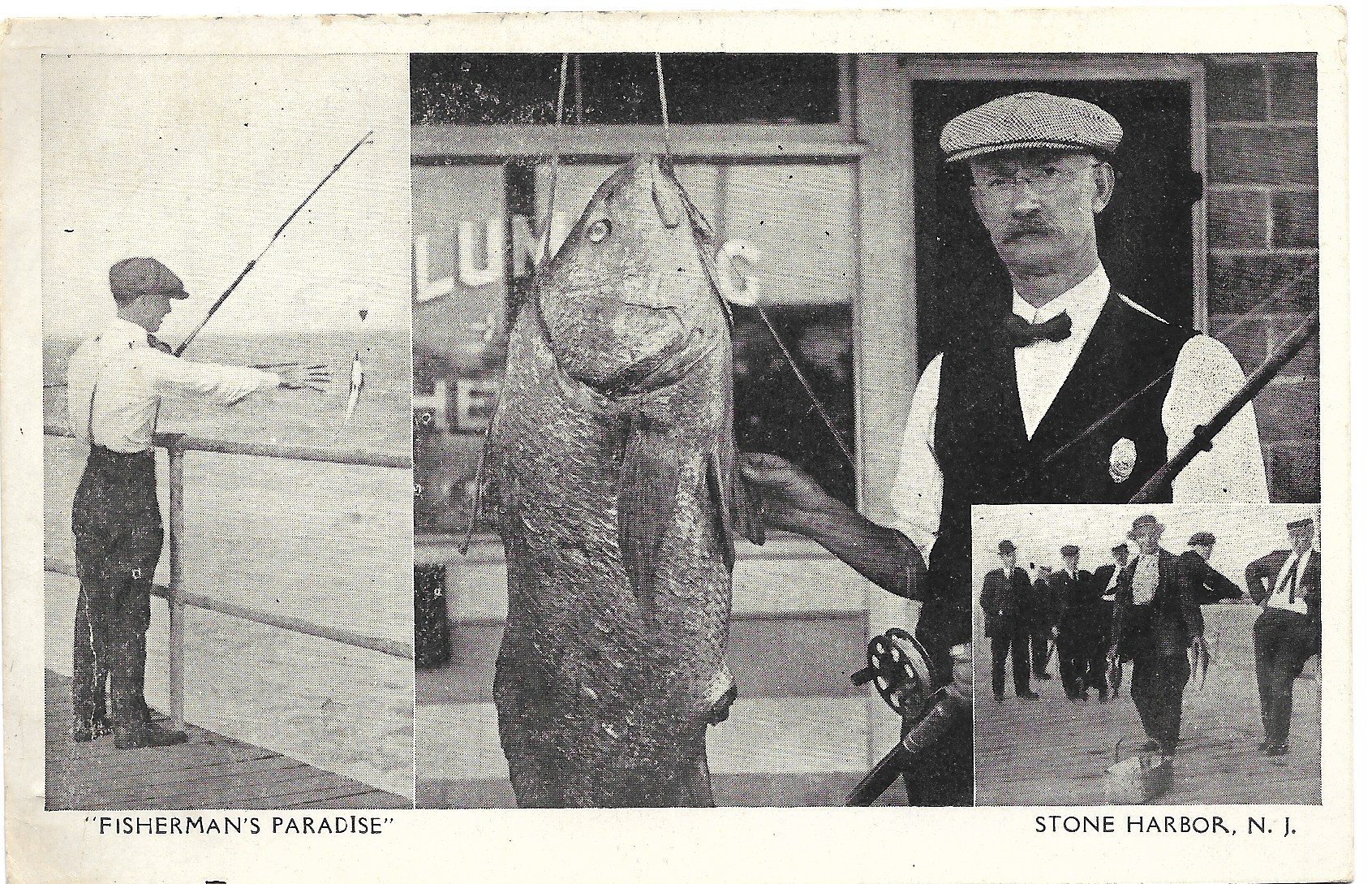 This third post card portrays and incorporates 3 different but related photo views and is aptly titled ‘Fisherman’s Paradise.”  The caption on the message/address side of this item states: “Large caches from the Parkway Bridge, the Boardwalk at high tide and in the waters of the Great Channel and the seven beautiful yacht basins have earned for Stone Harbor the title of ‘Fisherman’s Paradise’.”  Please be advised that after having consulted another source of information, it has been determined that the fisherman shown here and who is displaying his prize catch has been identified as being Mayor Samuel E. Herbert.  Herbert was the 2nd mayor of Stone Harbor between the years 1915 and 1918 and he also served earlier as a councilman for 2 years from the time when the town was incorporated as a Borough on  May 12, 1914.  Here we see Herbert with his official badge on his vest showing off a big drumfish with his fishing rod and standing in front of the store front window of his own plumbing business. 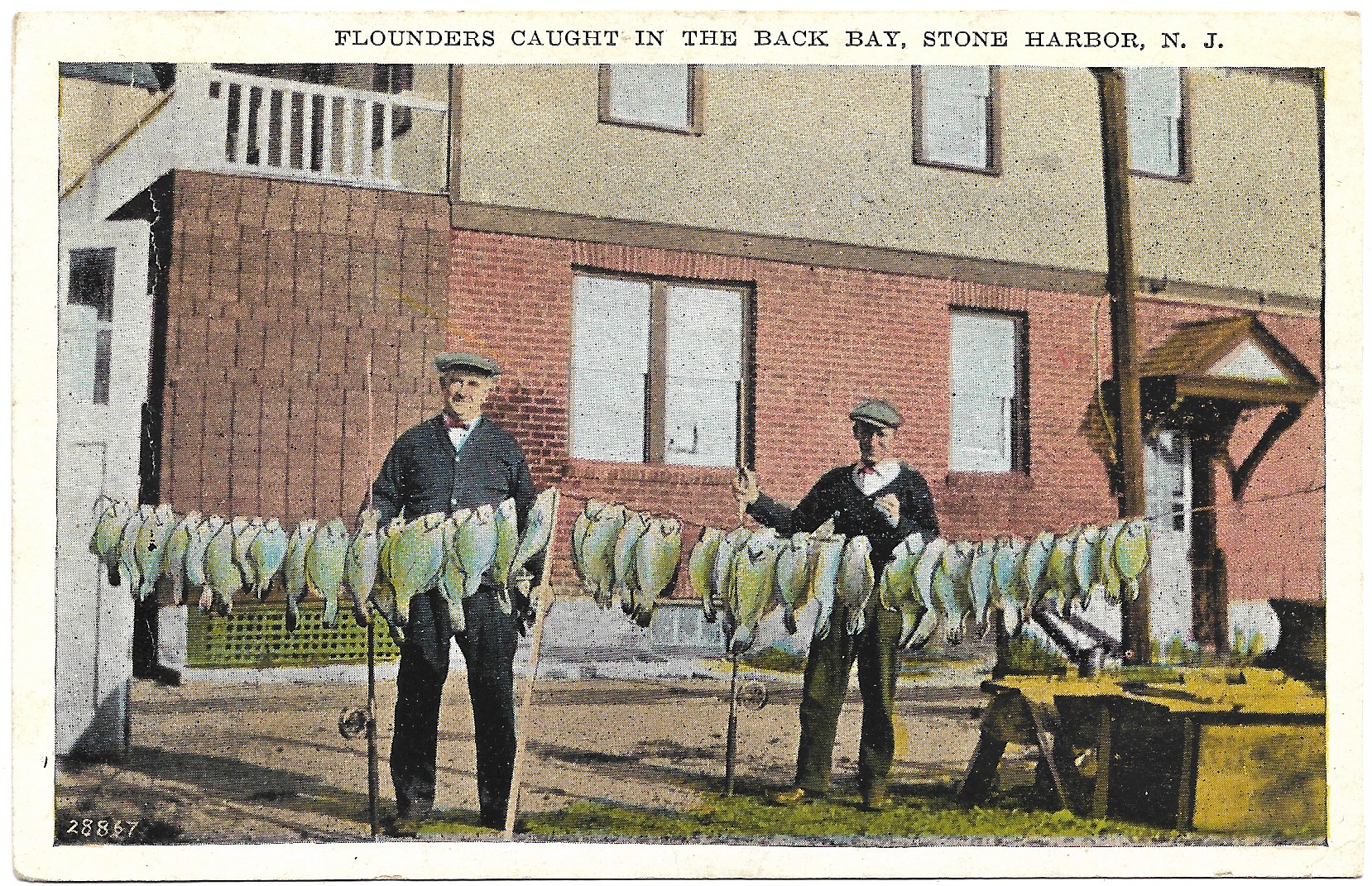 This fourth image is a real beauty.  Titled “Flounders Caught in the Back Bay,” two local fishermen pose and display their large catch of nearly forty summer flounders.  Based on a comparison with another known photograph, it is believed that the gentleman standing on the right in this image is none other than well-known Stone Harbor resident and local merchant, David Troxel himself.  He and the other unidentified fisherman are shown here standing on the vacant lot just east of Troxel’s well known variety store (his building shown here in the background) on 96th Street and Second Avenue.  In addition, Troxel held a Borough Councilmanic position for the years 1915, 1916, 1917, 1918 and 1919.  It can also be disclosed that this is a post card that was actually commissioned, published and in all likelihood even sold by David Troxel in his own store and bears an AUG 24, 1937 Stone Harbor postmark.  Knowing that bit of information and for what it’s worth, in all likelihood this actual photo was taken some time in the early to mid-1920s, 10 to 15 years before this 1937 mailing.  Some of the most popular scenes on post cards were often still available for sale many years after they were originally placed on sale.  This very scene might have captured so much attention and even epitomized fishing at Stone Harbor that it may have resulted in a long-lasting demand with strong sales enabling this particularly popular image to endure the test of time. 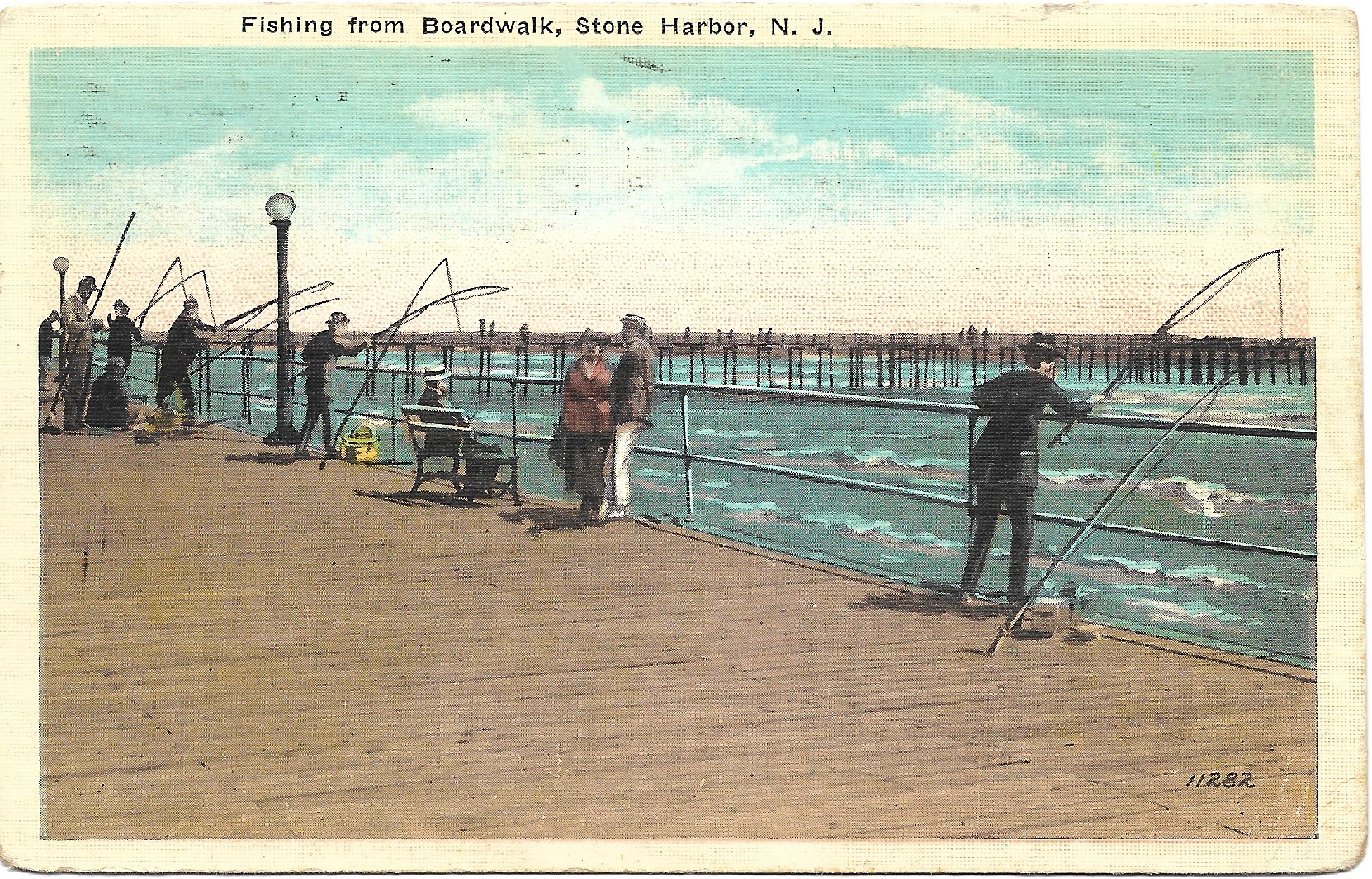 Postmarked on AUG 26, 1924, this fifth post card is titled “Fishing from Boardwalk.”  The fishing pier is actually shown in the background and extending out in the ocean.  Judging from all the people we see fishing from the boardwalk, it surely had to be at a time of high tide.  Looking more closely at this image, there are others that can be seen also fishing from the pier in the distant background.  In closing, the sender of this card says “We haven’t tried fishing but we were crabbing and only caught a few.” 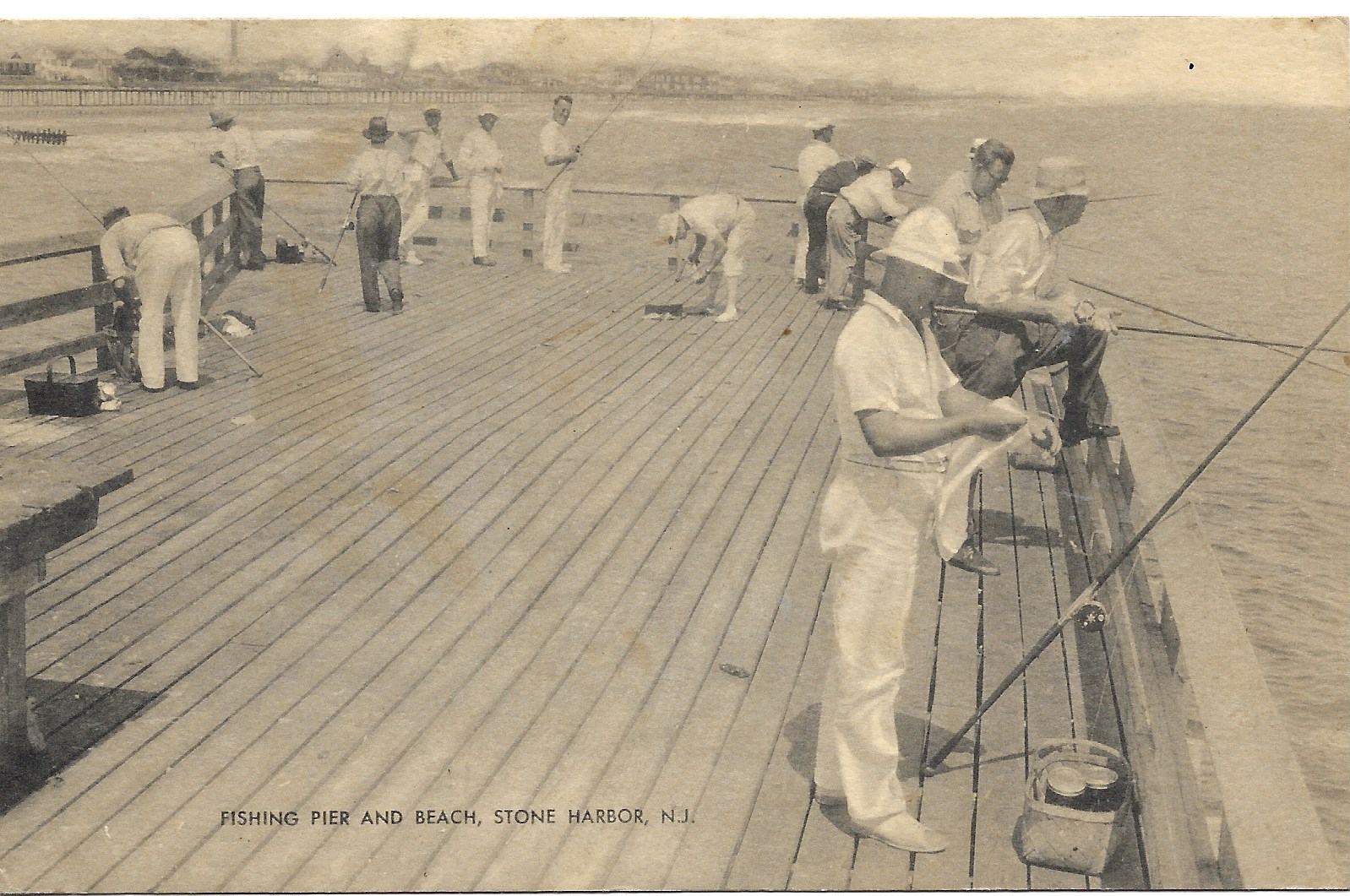 This sixth post card circa late 1930s or early 40s reveals a sizable group of men casually and I might add patiently fishing from the popular pier at Stone Harbor.  Judging from their demeanor, fishing is serious business.  Careful examination of the Stone Harbor skyline in the background reveals from left to right a good portion of the one and a quarter-mile length of the actual boardwalk itself, the tall water tower at 96th Street and the prominent building that was known as the Casino, originally intended to house various forms of entertainment and soon thereafter was repurposed to become known as the Ocean Front Apartments. 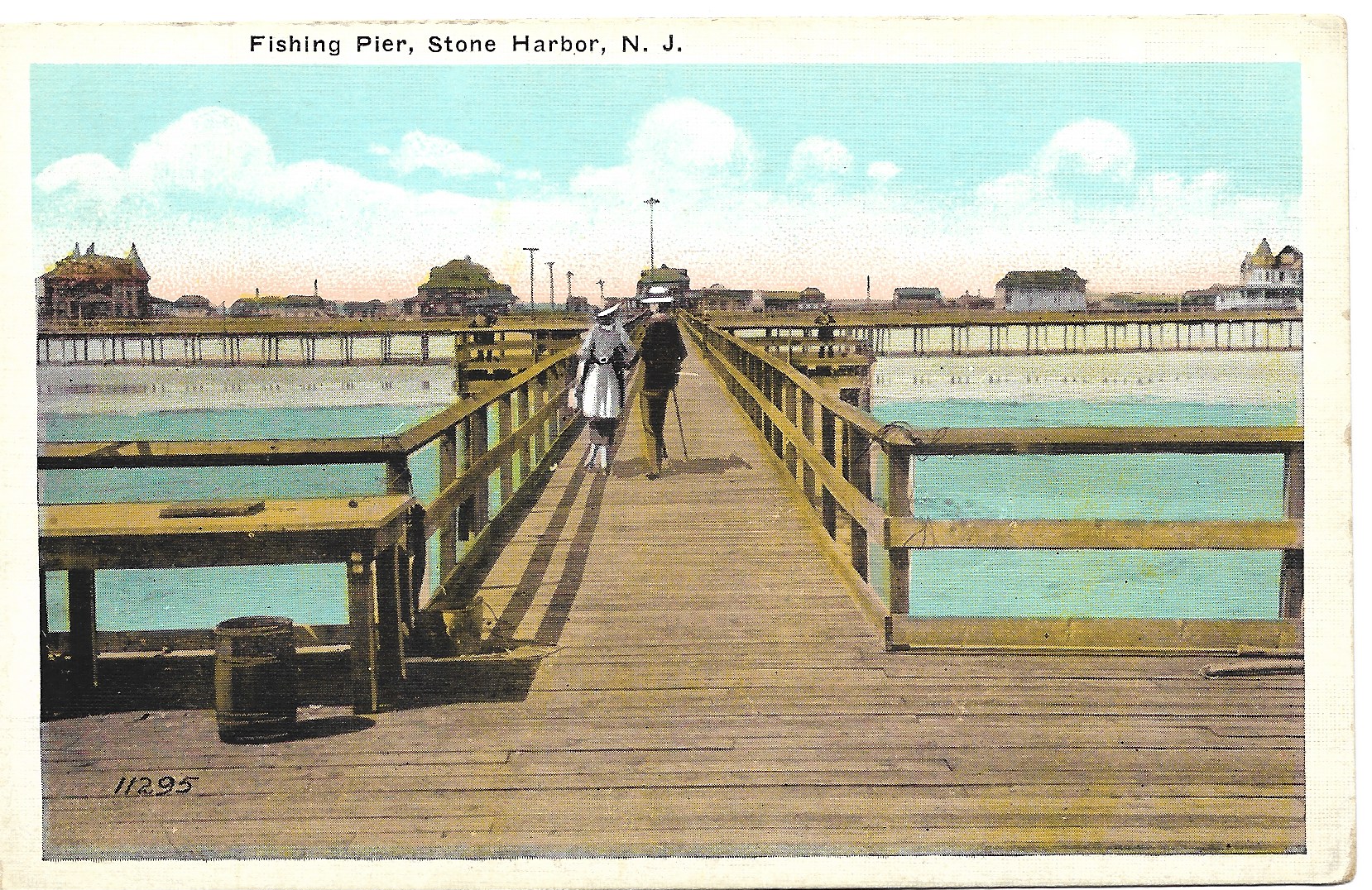 In this seventh image we see a couple leisurely strolling arm in arm along the fishing pier toward the beach and the boardwalk shown in the background.  Also are included numerous oceanfront properties and it would appear that the very large Queen Anne style house on the far right upper corner of this image was built by and belonged to one of the three Stone Harbor founders, Reese P. Risley.  Reese held the title of Vice-President of the South Jersey Realty Company and his ocean facing home located on First Avenue and 85th Street was affectionately called “Hydrangea”.  Perhaps one of our very knowledgeable readers might even recognize and identify some of the other buildings in the background. 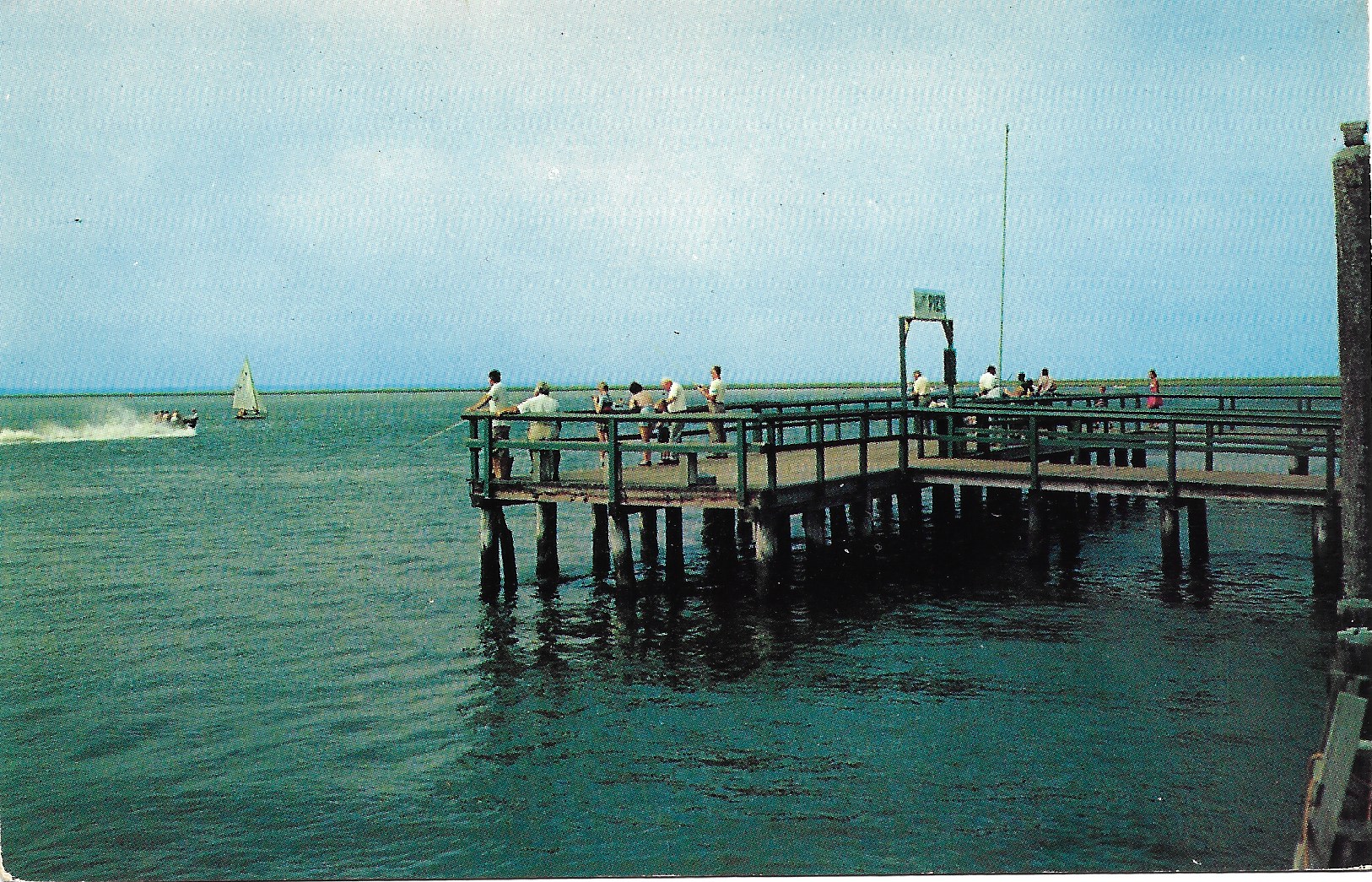 This more modern chrome post card shows people watching a motor boat and a sail boat out on the bay as well as enjoying fishing on the Municipal Pier located at 83rd Street. 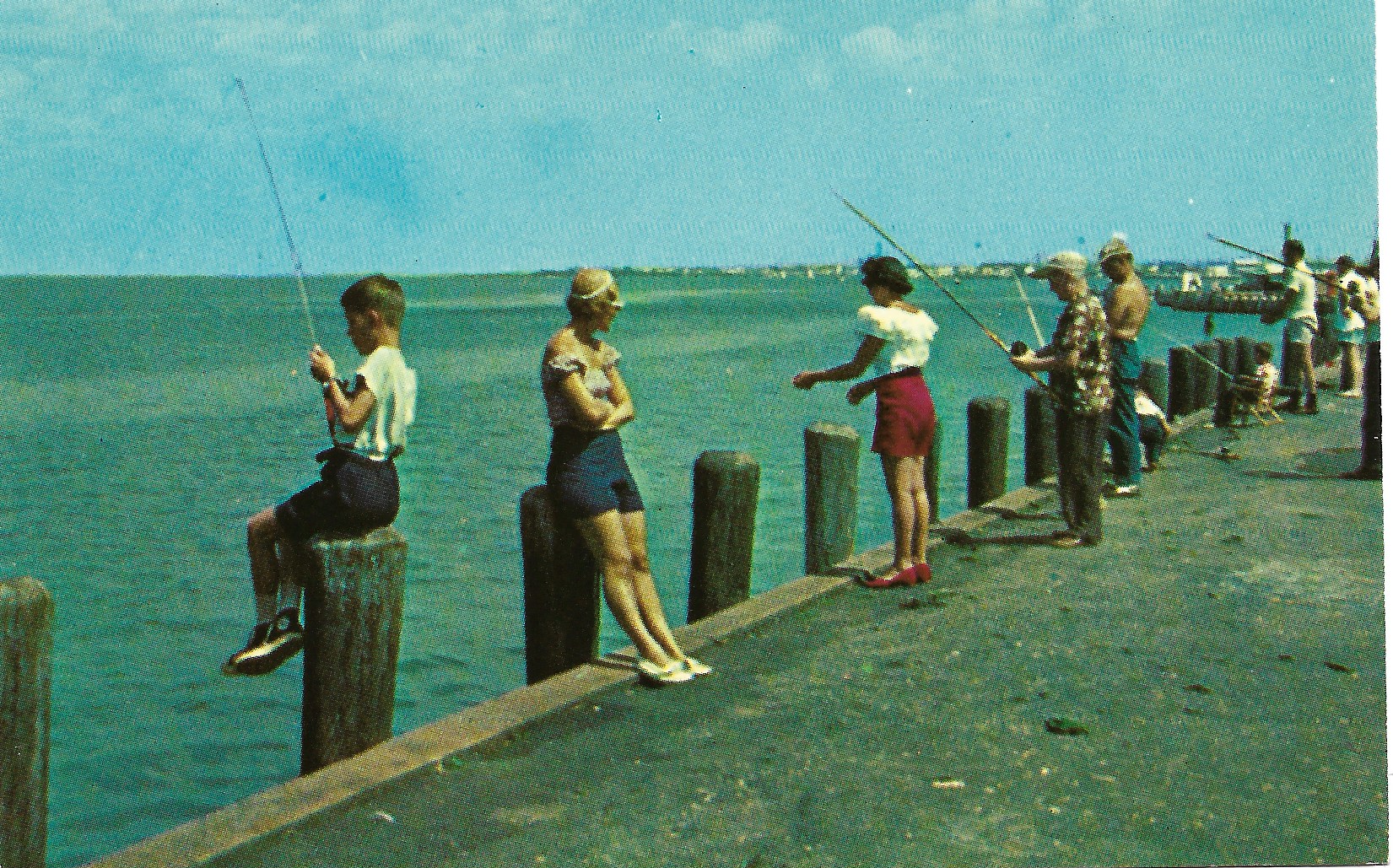 Continuing this basic theme about fishing, this next modern chrome post card offers “Greetings from Stone Harbor, N. J.” and is subtitled “Fishing is Good Here.”  Again, we are overlooking the Great Channel on a warm summer afternoon. 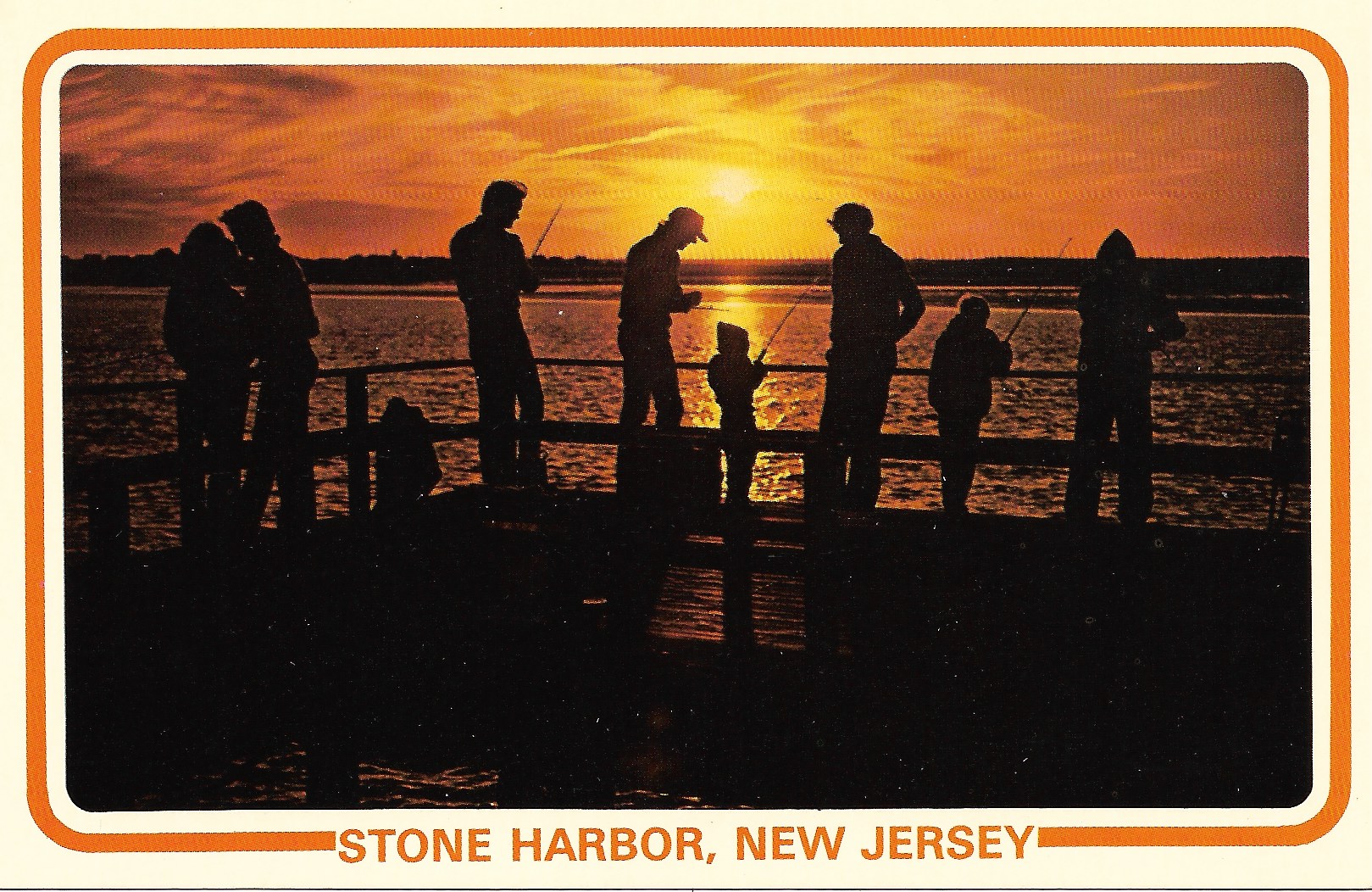 Illustrated here is the tenth post card depicting a dramatic sunset at the 86th Street fishing pier, overlooking the Intercoastal Waterway.  Among the group of both young and old shown here, the caption on the reverse side of this card informs us that some of the varieties of fish caught at this location included flounder, weakfish and sea bass. 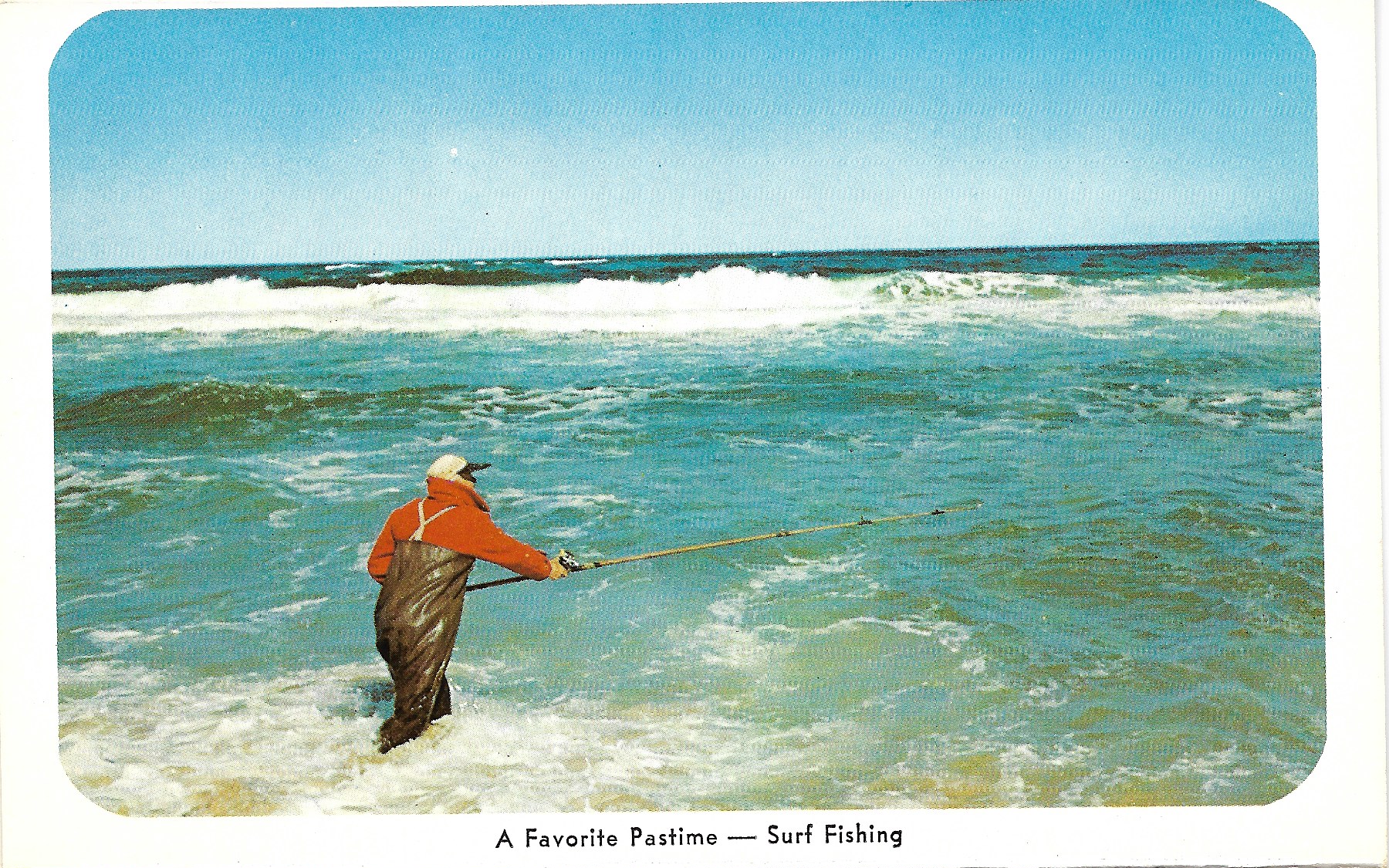 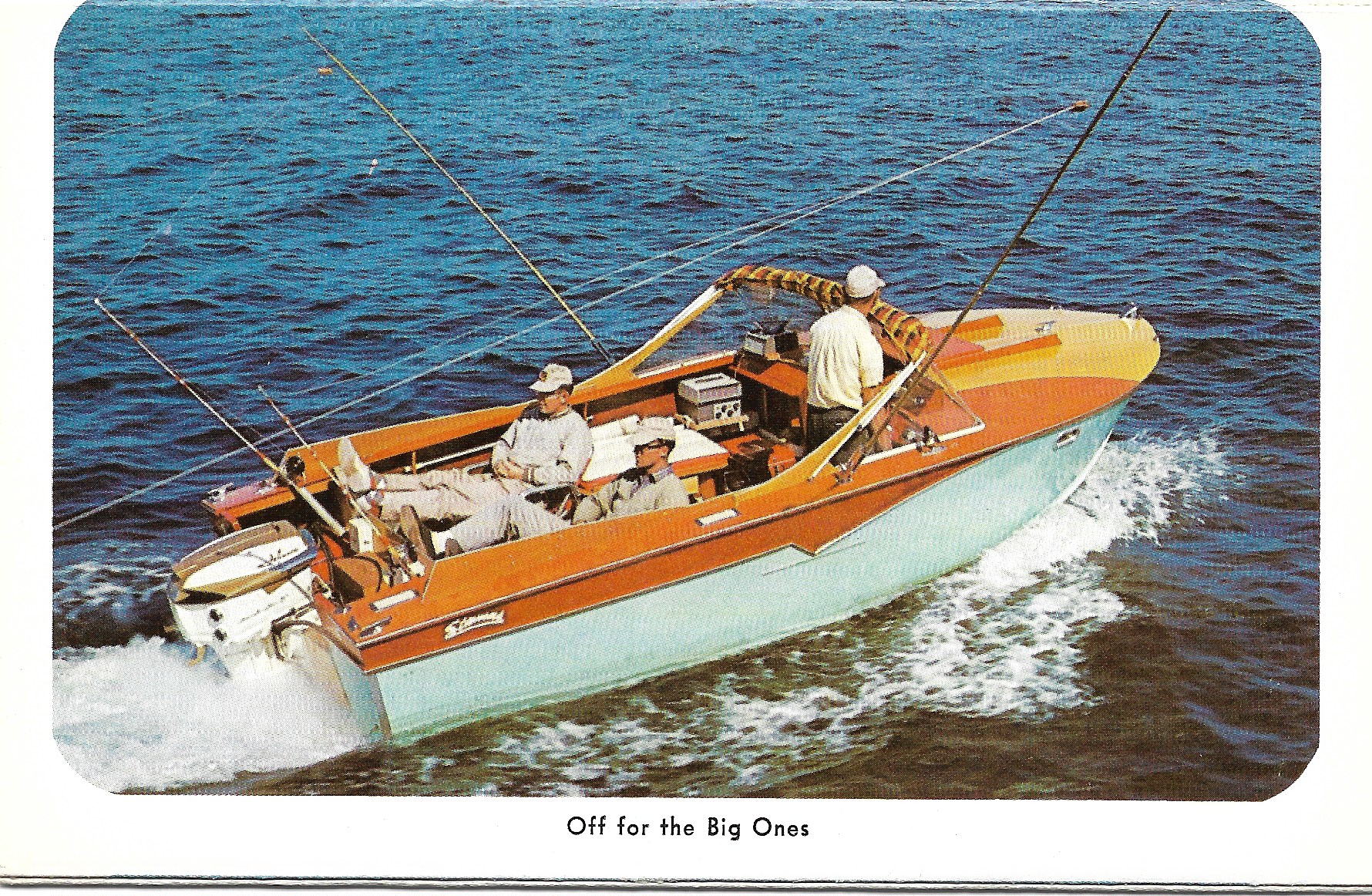 Finally, the last two images provided here were taken from what is known as a Souvenir Folder which in this case consisted of a total of 14 different scenes featuring “The Seashore at its Best” – namely, Stone Harbor.  One view shows a surf caster dressed for cold weather engaging in one of his favorite pastimes – surf fishing.  Casting his line out into the chilly surf, we notice this fisherman is wearing his traditional but necessary waders with suspenders, a waterproof jacket along with a cap.  Clearly, he is dressed to “tackle” the elements and the so-called forces of Mother Nature.  It should be noted that surf fishing at Stone Harbor has long been enjoyed and has proved popular even on a year-round basis.  The other image features 3 relaxing fishermen in a motorboat sporting a Johnson brand outboard motor of that era.  Judging from the number of rods with lines seemingly trailing in the water, it would appear that these men might actually be trolling for fish (although they do seem to be traveling a bit fast for trolling) and all hoping for catching the “Big Ones” as the title states!

This rounds out our selection of post cards pertaining to the ever popular sport of fishing at Stone Harbor, N. J.