“THE STONE HARBOR BOARDWALK STILL LIVES ON IN POST CARDS”

The first post card image shown here bears the caption “Air View Showing Ocean at 96th St. and Tennis Courts, Stone Harbor, N.J.” Two things caught my attention in particular regarding this card. One has to look very closely for the boardwalk but it is indeed depicted running along the beach in the upper portions of this image. While this photo may well have been snapped sometime in the early 1940s, it is what I saw and noted on the reverse side of this post card that really spoke to me. This card was postmarked at Stone Harbor on July 5, 1944. Why might this ordinary postmark have captured my attention? The reason is the date and that in just 71 days or about two months time from the July 5 date of this mailing, a tremendous storm known as the Great Atlantic Hurricane of (September 14,) 1944 would deliver a knock-out blow to Stone Harbor’s boardwalk and the seashore resort would eventually decide not to rebuild that splendid promenade.

What also caught my attention was the handwritten message that the sender wrote on the back of this card. In that brief message the individual specifically mentions the boardwalk. Here is what a man named Jack S. wrote to either friends or family in Stroudsburg, Pa.: “Very nice down here so far. Ocean fine but quite a strong breeze. Last nite we sat on Boardwalk with a blanket over our knees. I’ve marked location of place.” Now, can you see where Jack marked the letter “x” on a place on the boardwalk in this first image? In all likelihood, this personally recorded visit by Jack to Stone Harbor in early July of 1944 may have been the very last time that he ever saw that boardwalk and perhaps even the last time he ever sat and relaxed on the boardwalk looking out over the ocean on a cool summer’s night! We will never know but most likely this evening visit to the boardwalk would become a moment in time to be both remembered and treasured, never to happen again!

Now, fast forward to 1947! Turning our attention to the second post card image, this color version presents a somewhat similar view as was shown on the previous image. In all probability both this and the previous displayed photograph were taken by someone from atop the Stone Harbor’s tallest man-made structure, the town’s water tower, which was located at 96th Street and Second Avenue. While 96th Street is in the foreground, we also see a “General View, Tennis Courts and Water Front, Stone Harbor, N.J.” And once more if we look very closely along the beach on this second card we can faintly but noticeably see the ever-present boardwalk still standing. What is interesting to note here is that this very post card, postmarked at Stone Harbor on October 15, 1947, was still on sale and being vended more than 3 years after the momentous storm of ’44 had destroyed the boardwalk. So in a way it can be said that history continues to live on due to these wonderful images that are preserved on post cards that some people actually enjoy collecting and saving.

As an aficionado of things relating to Stone Harbor history including paper collectibles, I found the observations that I have made regarding these two illustrated post cards to be interesting enough to share with you. 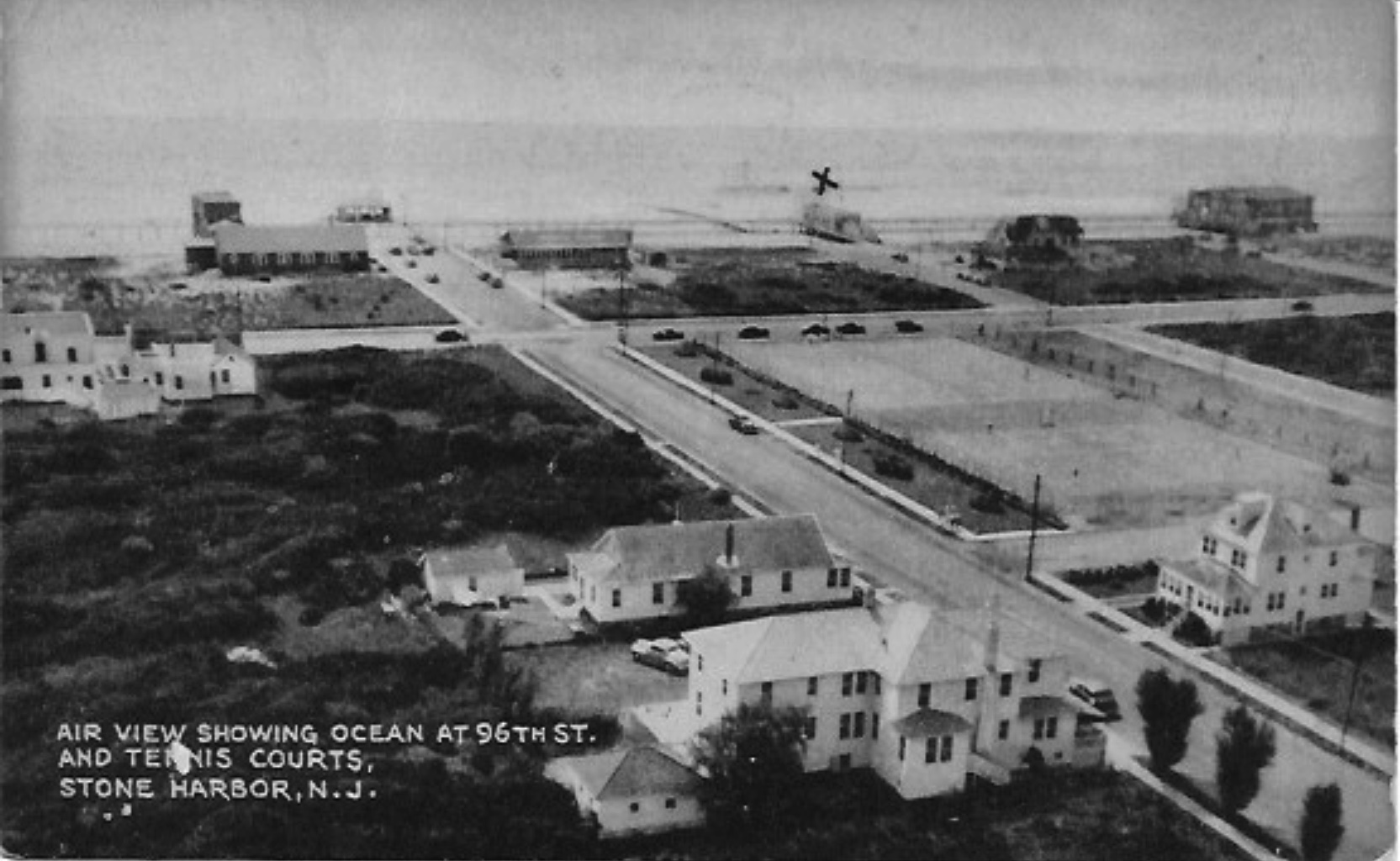 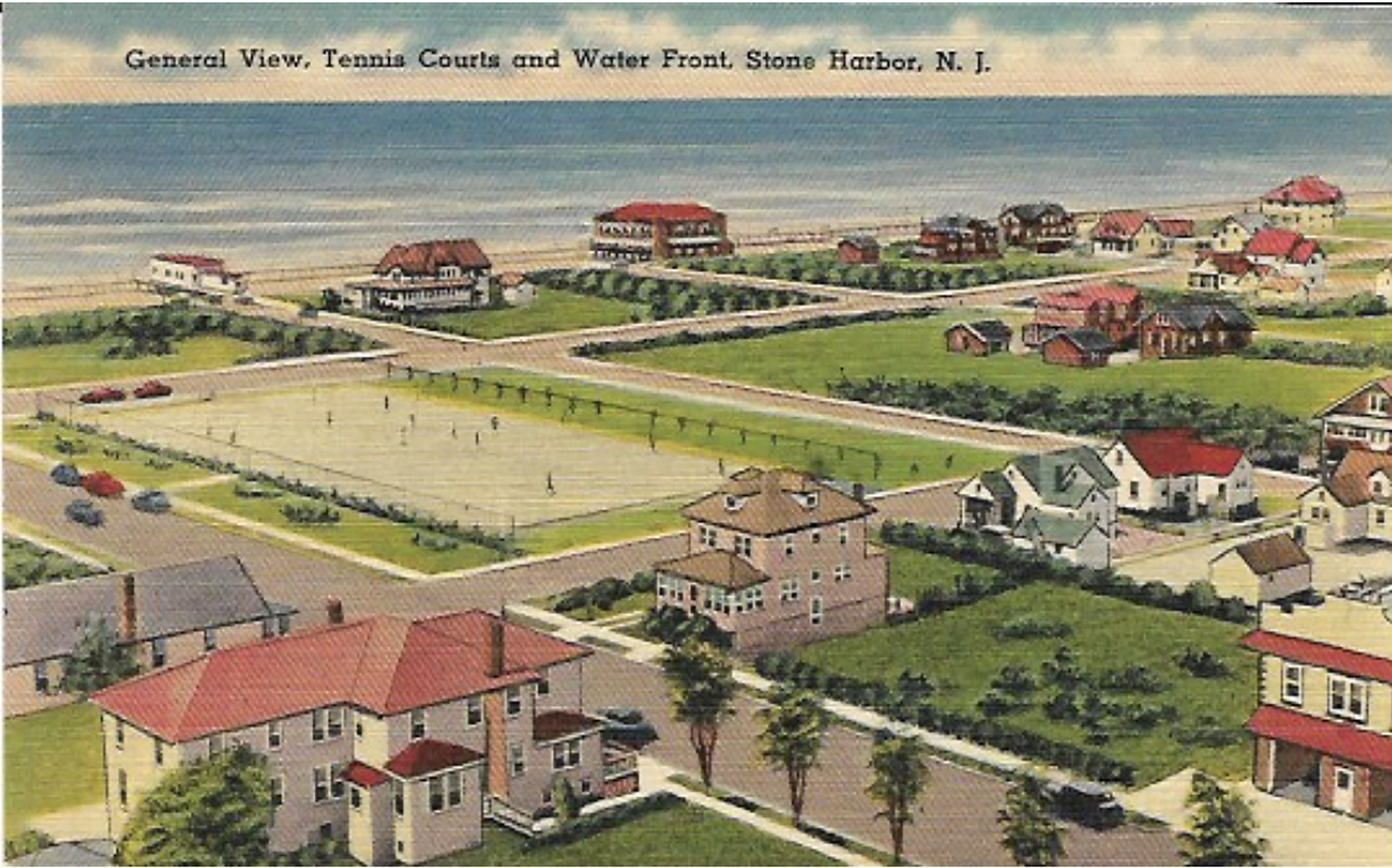