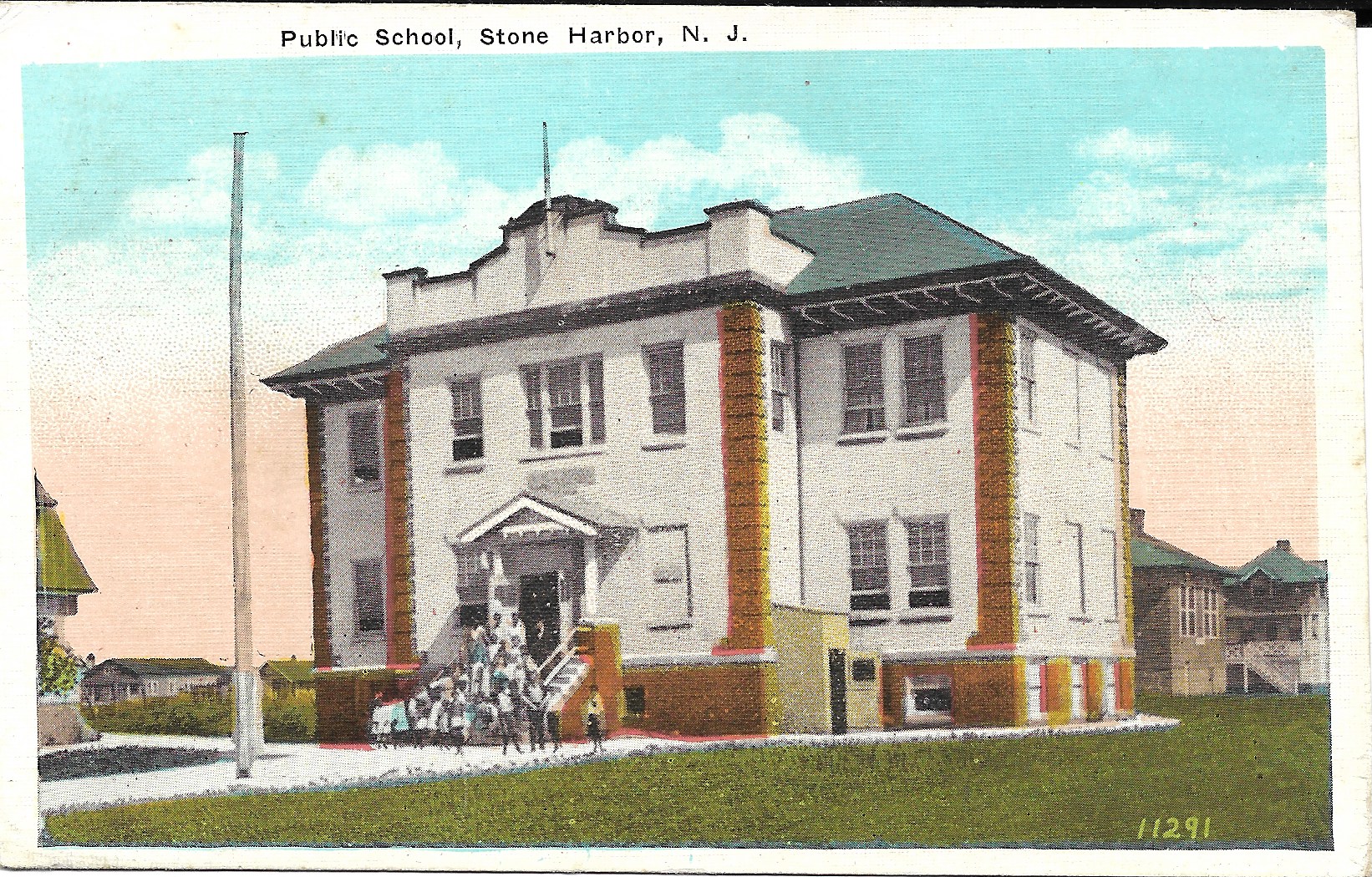 “Working for Stone Harbor Elementary means ‘working in paradise,’ says Chief Superintendent Stacey Tracy.  ‘This is a fabulous community.’  But even the most utopic town faces obstacles when it come to education.  Through the years, Stone Harbor’s school has weathered everything from, well, formidable weather to threats of closure, and it’s proven itself as a little institution with a lot of staying power…”

The statement included above is the lead-in tribute to the chapter on “Schools” contained in the 2014 book entitled STONE HARBOR: ONE HUNDRED YEARS OF THE SEASHORE AT ITS BEST.

Introduction:  This article will focus on the schools of Stone Harbor by utilizing 5 vintage picture post cards and 2 photographic images accompanied by some basic background information about each school along with brief descriptions of each image. 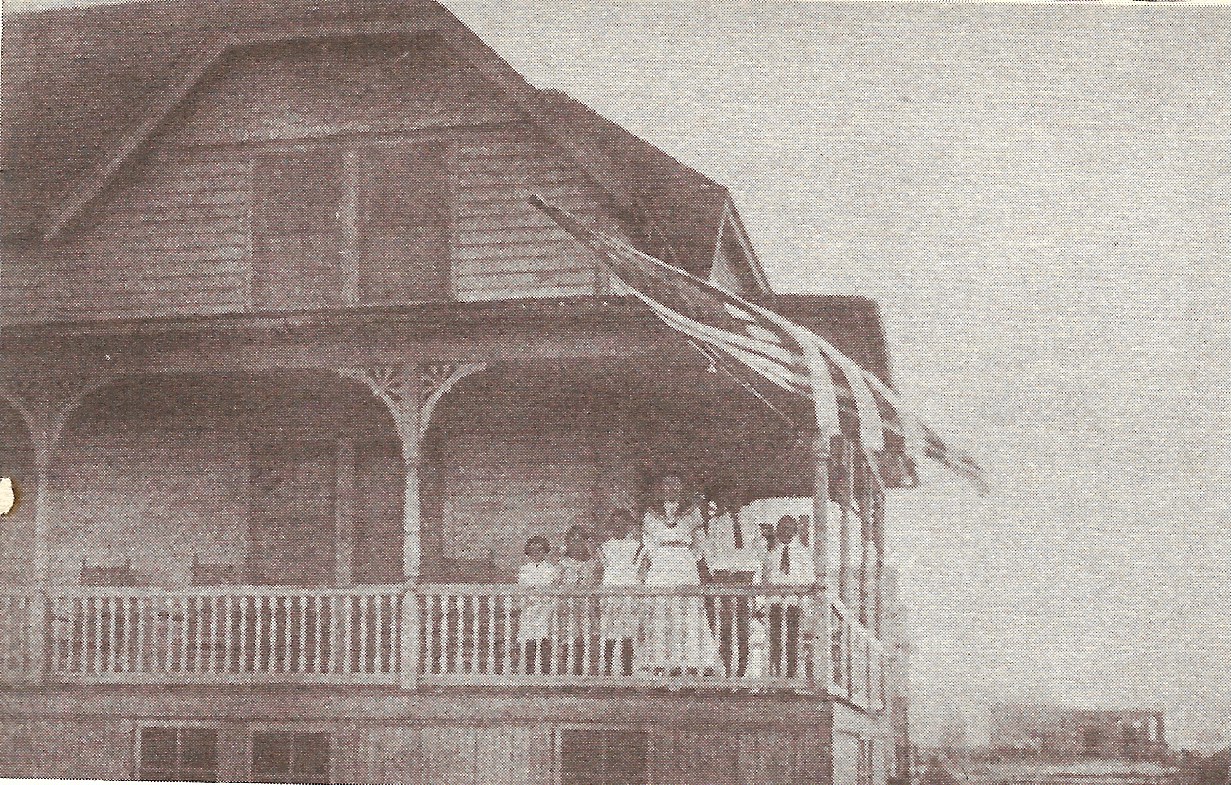 The first formal public school classes at Stone Harbor commenced in September of 1910 with just 5 students meeting at the one-room annex of the Harbor Inn located at 83rd Street and First Avenue.  The mono-color photograph shown here features 6 persons standing on the wrap-around porch of the Oaks Cottage beneath a huge American Flag waving in the wind.  In all likelihood the individuals portrayed in this particular image are the very first 5 students (3 girls and 2 boys) including Emma Troxel, Elsie Hines, Florence Hines, Theodore Salvesen and Oscar Salvesen along with their teacher Miss Margaret McCraven from the nearby town of Goshen.  At the end of the first term there were 12 students in attendance and at the start of the new term enrollment had climbed to 19 students. 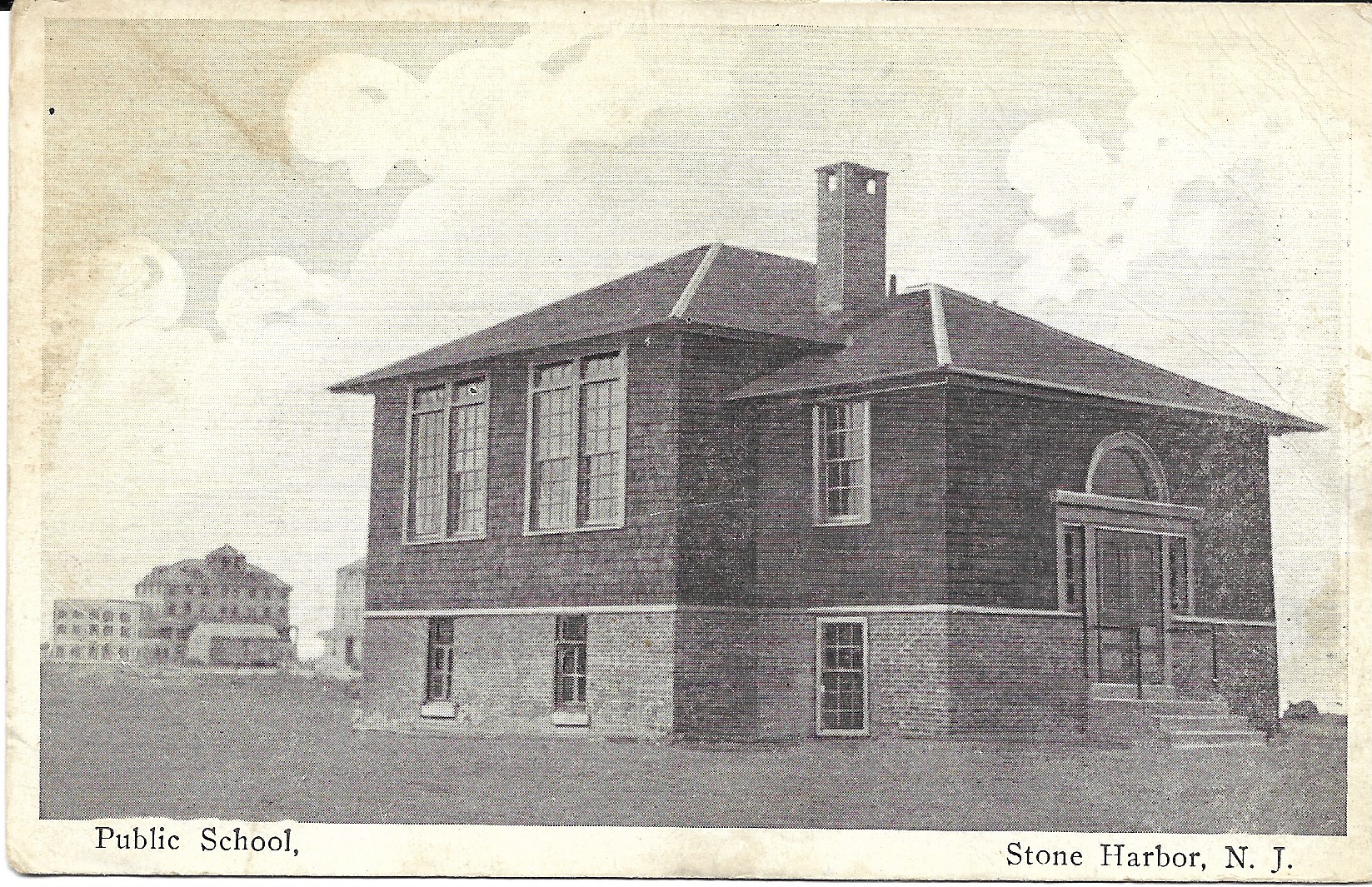 Soon increasing enrollment caused the Board of Education to authorize the construction of a school building which was called No. 9.  Here we see a post card depicting the new public school which built and opened in 1913 was situated on 93rd Street between Second and Third Avenue.  At the outset the higher enrollment even necessitated the hiring of a second classroom teacher.  In the background to the left is the newly completed Shelter Haven Hotel on 96th Street.  Some more related facts pertaining to school No. 9 include it would in just 2 years time by 1915 become the town’s Borough Hall that would continue to be used in that capacity until 1957 when Stone Harbor completed construction of a new Municipal Building.  Apparently the old school building was actually re-located and physically moved to the 95th Street beach area where it became the headquarters for the Stone Harbor Beach Patrol.  Five years later the severe storm of 1962 caused significant damage to the aging Beach Patrol building which required it to be demolished and another headquarters to be rebuilt in its place. 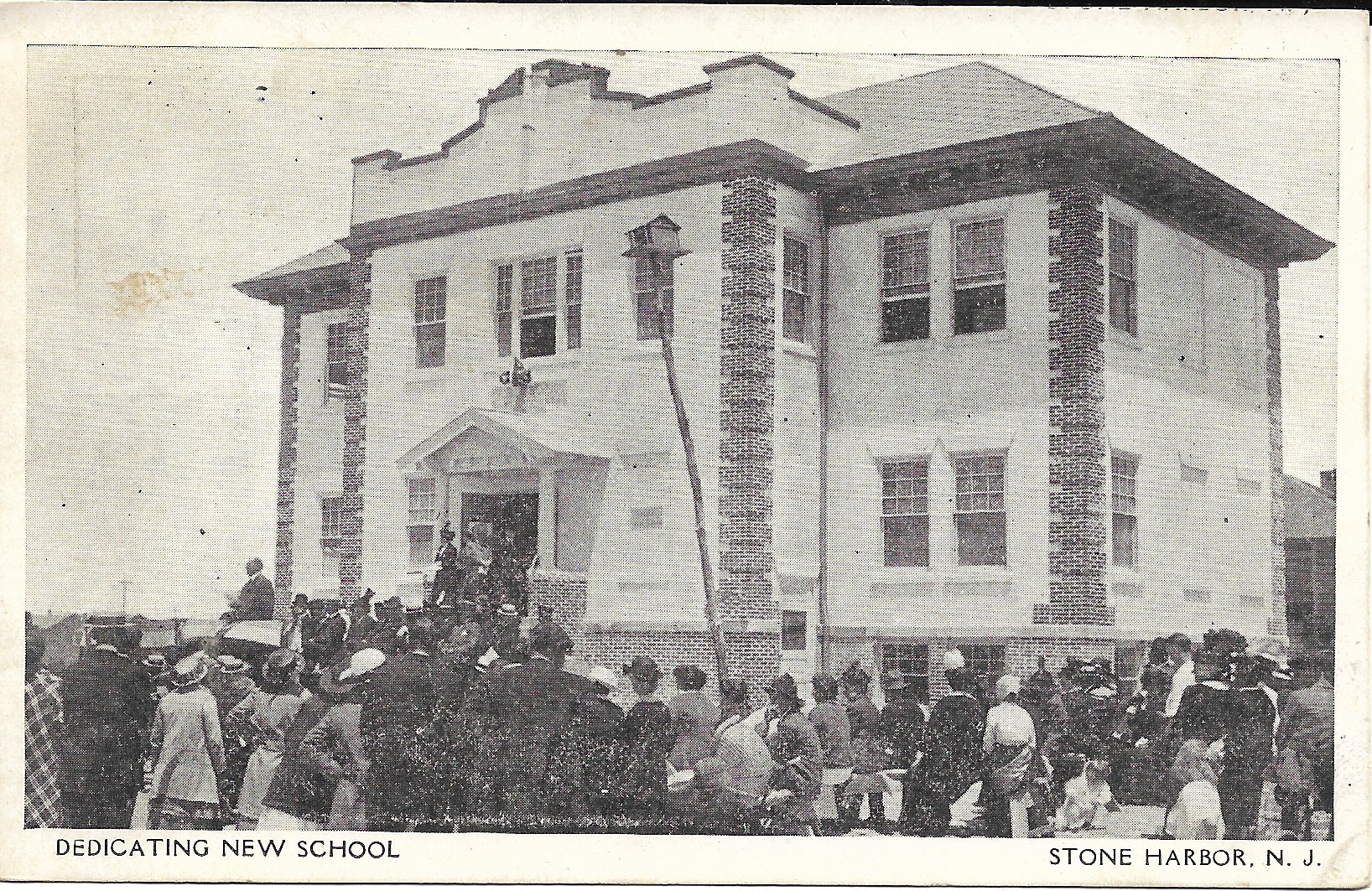 In just two short years time, the need arose to make yet another significant change.  In 1915, and as previously reported, the 93rd Street school building actually became Stone Harbor’s “Borough Hall” and at that time another second school building was erected on a site just a block away on 94th Street at a cost of $12,000.  This new two-story building was then designated as school building No. 1 and consisted of 4 classrooms and a basement.  Officially dedicated on Memorial Day, 1915, the first post card of this pair shown here clearly captures the “Dedicatory Ceremony” with many persons assembled for the occasion and a speaker at the podium in the lower left corner can be seen addressing the onlooking crowd.  It should be noted that teacher Margaret McCraven would become this school’s first principal.  Also, and utilizing the school’s basement, this new building had ample space to house classes for home economics for the girls and manual arts classes for the boys.  Furthermore, there were even classes offering music and art.

Please notice that the black and white image shows a flag pole actually attached to the upper front and center area by the roof of the school building.  In addition, you might notice the rather crooked but slender tree trunk supporting a large bird house high above the ground.

The companion image shown here in color reveals a sizable number of students and probably their teachers assembled on the front steps of the school for this photo opportunity.  Careful examination of this color image shows us that the bird house is gone and there now appears to be 2 flag poles with a new taller one being prominently added to the grounds out in front of the school building.  These very post cards are both postally used and were postmarked at Stone Harbor in the years 1917 and 1926 respectively. 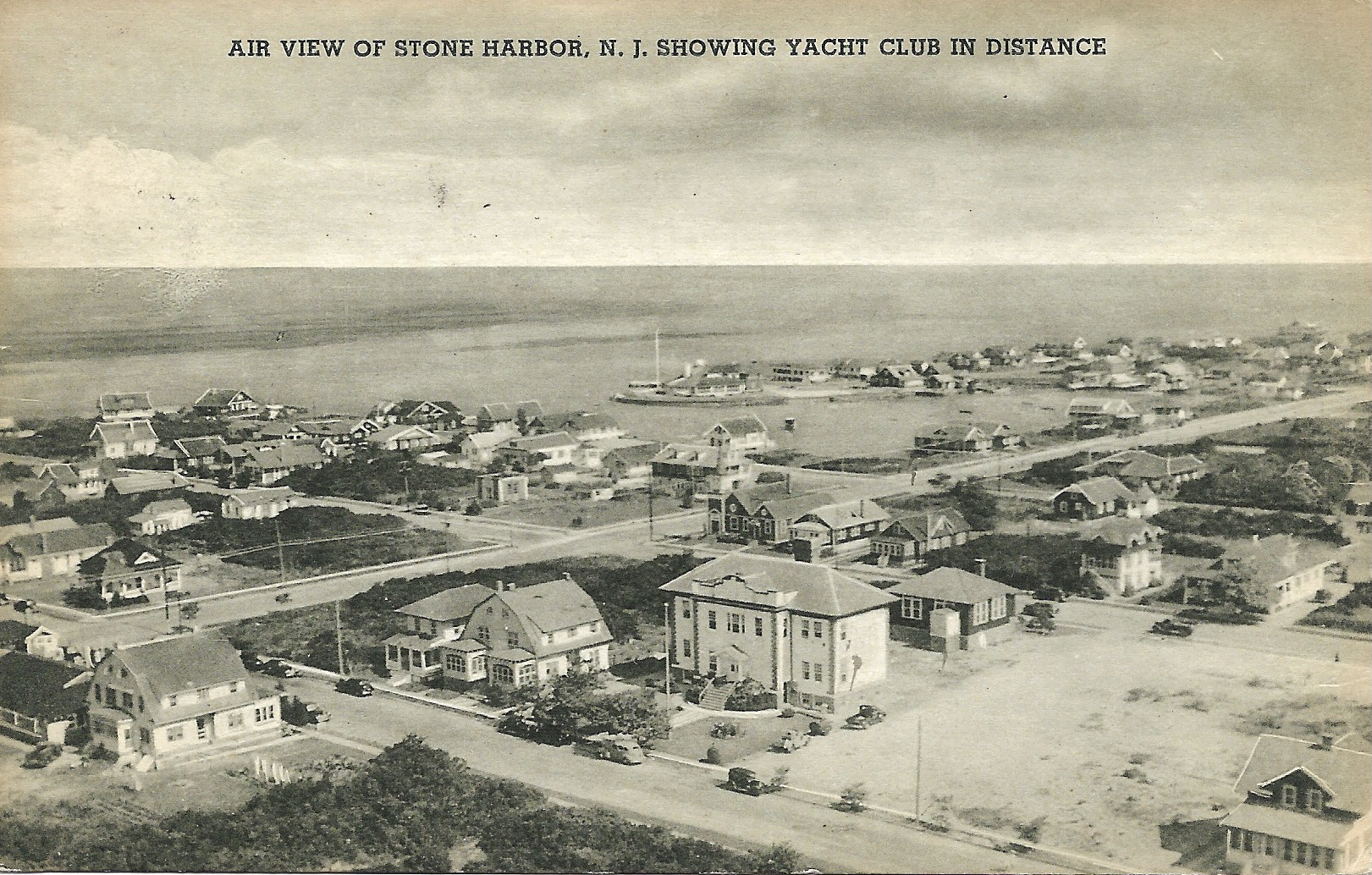 Advancing in time now, this particular air view was undoubtedly taken from atop the water tower at 96th Street and Second Avenue.  This black and white post card was postally used and shows an OCT. 1, 1941 Stone Harbor postmark.  Unbeknownst to Americans on this date, World War II would be lurking just around the corner.  Before continuing to the next item, please note that no flags are visible or flying from either of the flag poles in front of the No. 1 Public School (center foreground) or the Yacht Club (distance background) by the channel. 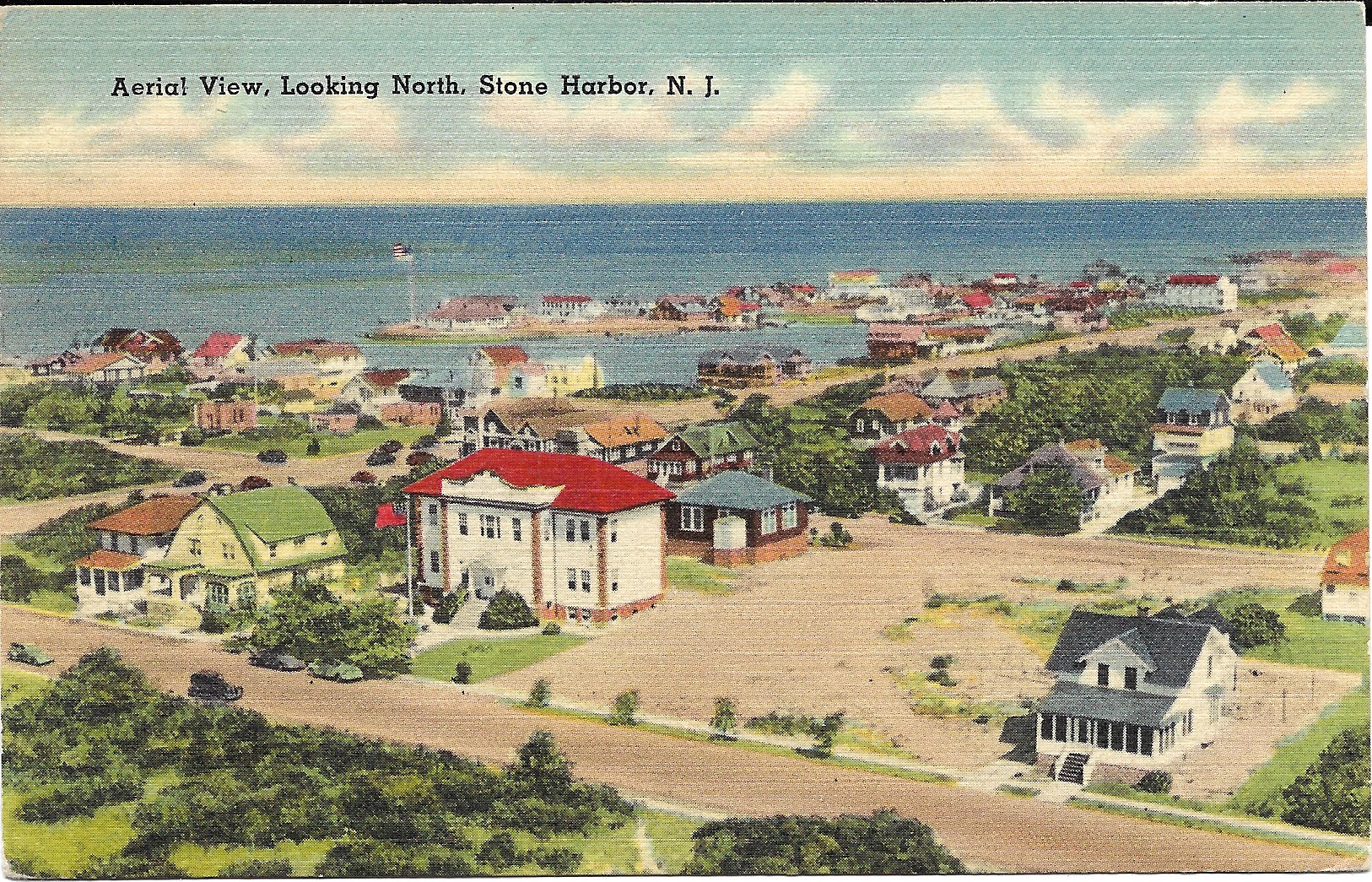 Here is a linen post card in color showing basically the same scene as before, only definitely taken at a different time but from the same vantage point from the water tower and a bit later than the last card just illustrated.  This particular item was postmarked at Stone Harbor in the year 1948.  Careful comparison between this card and the previous card reveals this colorized linen version does in fact show two fully extended American Flags raised and flying atop the flag poles in front of both the No. 1 Public School and the Yacht Club.  Are you able to detect those two flags?There are some other minor differences between the two images including the amount of area depicted, the number and the locations of the vehicles shown and the added growth of greenery or vegetation such as trees and bushes. 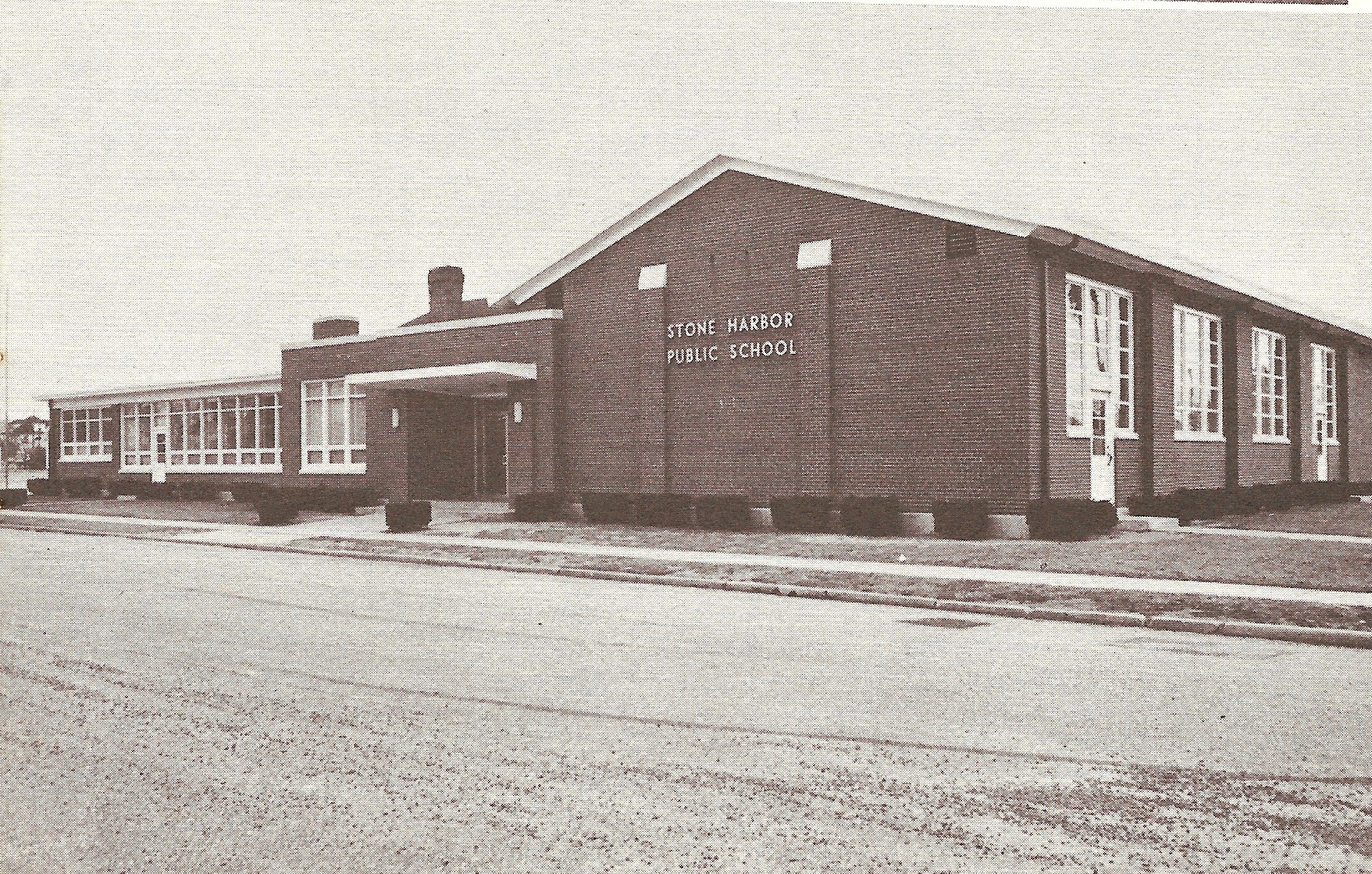 The final image presented here is a photo of the updated and modern one-story school located at the corner of 93rd Street and Third Avenue.  Built in 1957 at a cost of $200,000, this public school originally accommodated Grades K through 8.

It should be noted that the Avalon and Stone Harbor Elementary School districts were consolidated beginning with the 2011-12 school year.  As such, an arrangement was made whereby all the students in grades kindergarten through fourth from both towns would attend the school in Stone Harbor and the students in preschool three and four as well as grades five through 8 would go to the school in Avalon.  In the school year 2016-17, Stone Harbor had the 4th smallest enrollment of any school district in the State of New Jersey with 75 students.

Most recently and in this current school year 2022-23, Stone Harbor had reported an enrollment of 92 students as well as 10 classroom teachers.  Now those students who are in public school at the secondary level or the ninth through twelfth grades, attend Middle Township High School in Cape May Court House.

In closing and for the record, the Stone Harbor and Avalon school districts operate like a single school district even though they are considered two separate entities.  All things considered, providing strong instructional programs and curricular offerings are and always have been important to the residents and the children of Stone Harbor.