Introduction:  If you were commissioned to take photographs of some aspects of life in the seashore resort community of Stone Harbor, New Jersey, what types of scenes would you seek to capture with a camera in order to characterize and even promote this town back in the year 1917?  Moreover, if you were intent on selling picture post cards of Stone Harbor in 1917, what kinds of scenes do you think would be more likely to sell?  Think about these questions for a moment or two before continuing on with this particular account.

Upon scrutinizing each of the 3 vintage post cards showing the Stone Harbor boardwalk circa 1917, the author of this narrative speculates that all 3 of these photo views were taken on the same day, around the same time and by the same photographer.  You may then wish to ask just what might lead one to make such a conclusion?  So here is an explanation and the basis for this very article.

Generally speaking photographs that depict people seem to generate greater amounts of interest.  For that reason magazine and book publishers tend to place an image of people on their front covers.  The appeal is to attract the viewer to see some sort of recognizable or relatable action taking place.  In fact it just might be a scene where people are strolling and enjoying the outdoors on a boardwalk at a certain South Jersey seashore resort.  The same is true with the subject of post cards.  Post cards are often intended to have impact as well as a way to connect with people through human interest stories and scenes.  Therefore, let us begin. 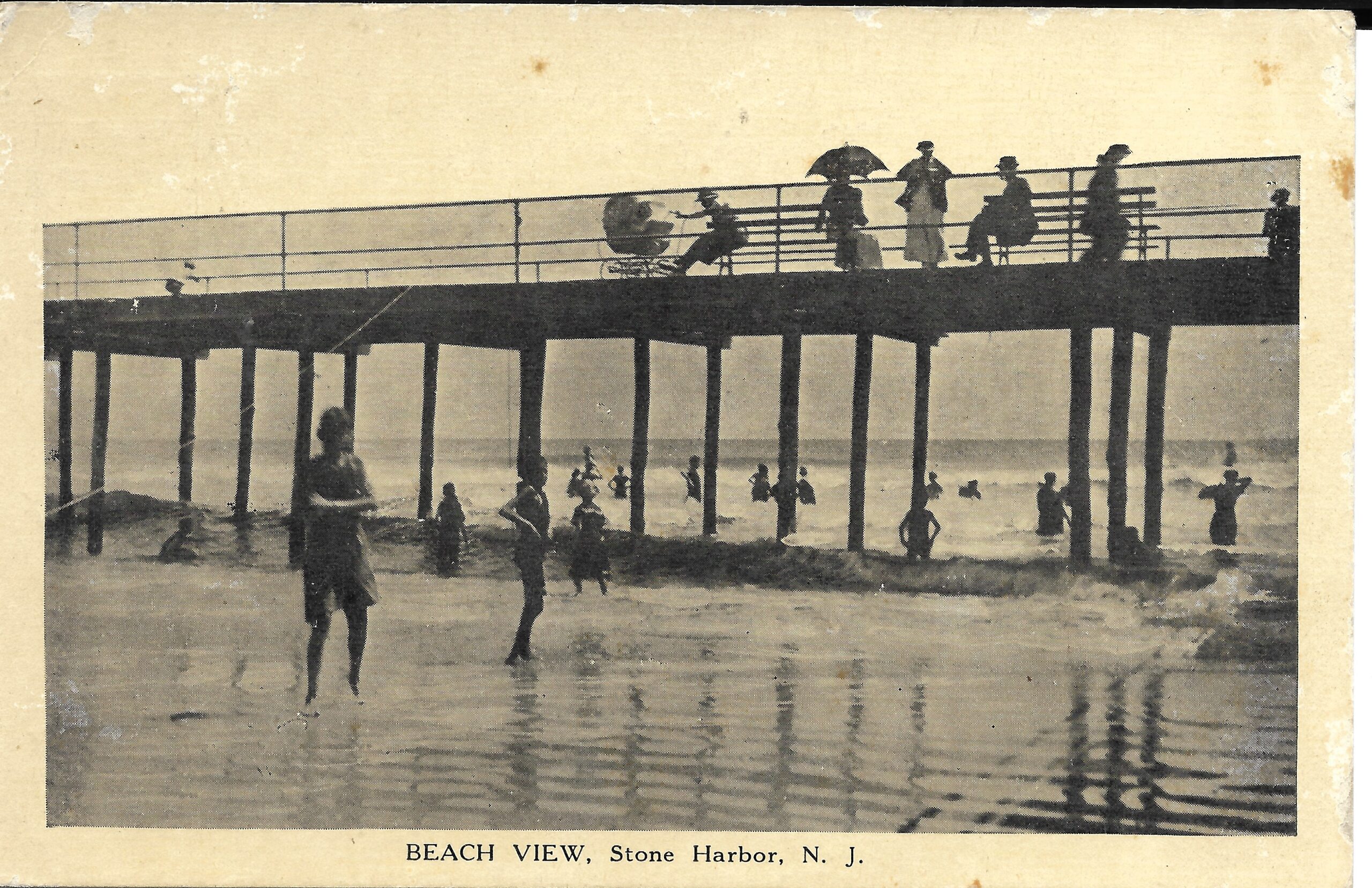 The first post card shown here is our starting point or frame of reference and is simply titled “Beach View”.  Please pay particular attention to the various persons seated and standing who are assembled up on the boardwalk.  Slowly scan left to right along the boardwalk and notice the following features: the baby stroller, bench #1, then one of the persons holding an umbrella, and lastly, a 2nd bench.  Curiously this image has for some reason had all the lamp posts up on the boards removed and the deletion seems fairly apparent as the sky above the railings is void.  To this point perhaps the printer thought it best for some aesthetic reason to make the photo less cluttered and more pleasing to the eye without those lamp posts.  Who knows?  But we do know that the electric lamp posts were installed around 1916 and were operational.  At the time of these 3 photos there also appears to be a high tide as people on both sides of the boardwalk are standing in the ocean.  In addition, it also appears that the photographer is by the water’s edge and in the lower right corner of this image are shadows that suggest that the inclined ramp approach to the boardwalk which is at 96th Street is behind and immediately to the right of where the photographer is standing.  This conjecture will be supported by what we will see in the next image.

The title to this second image is “96th St. and Boardwalk”.  In this scan notice that this photo was actually taken up on the boardwalk and facing northward with the beach to the left and the ocean situated on the right.  As with the previous image, there are also persons in the ocean on the left or the west side of the boardwalk.  Several more things should stand out upon viewing this post card.  On the far left portion of this photo are 2 persons under an umbrella who are standing on what appears to be the entrance ramp running from the end of 96th Street out onto the boardwalk itself.  Look most carefully and you should see both wood planking and railings jutting off to the left toward the town in addition to those running along the entire mile and a quarter boardwalk.  In the very center of this view you should also be able to observe a baby stroller identically shaped and facing the same direction as the stroller in the previous image.  And then there are notably numerous lamp posts running along the ocean side of the boardwalk.  Those lamp posts have inexplicably and suddenly appeared. 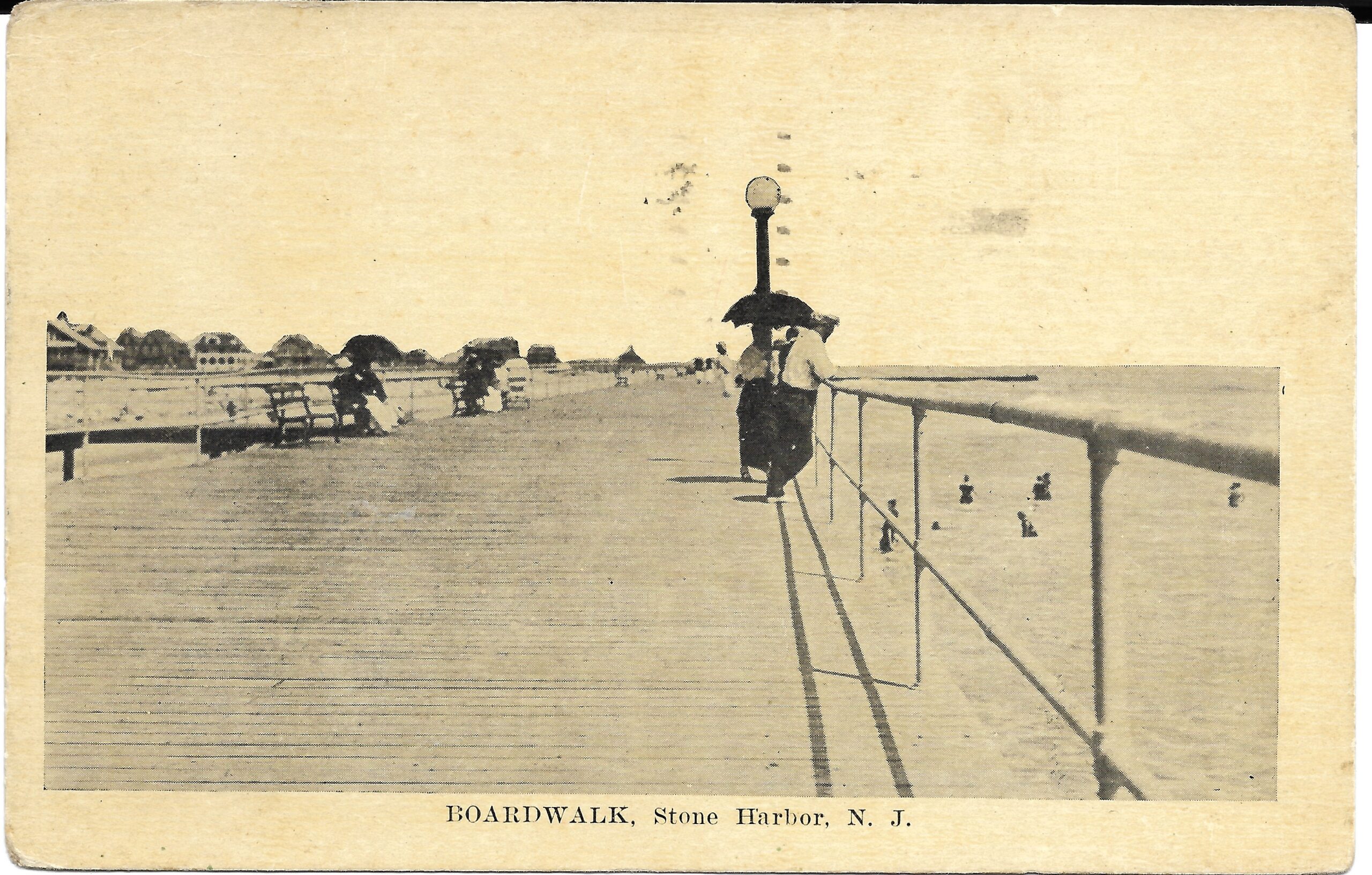 Keeping in mind our previous observations, this third post card simply states “Boardwalk”.  Here it is apparent once again that swimmers are in the water during the high tide on both sides of the boardwalk.  We also can see an umbrella and there is once more that baby stroller by a bench just left-center on the beach side of the boardwalk.  What’s also most interesting about this particular view is that the houses in the background are familiar and those acquainted with their placement will surely recognize and identify the following structures.  There is the distinctive Charles Hall house located on First Avenue at 91st Street that typifies a Mediterranean Revival style of architecture and was built in 1913.  Hall was an early Stone Harbor investor and his shingled home along with detached garage were showcased and promoted by the South Jersey Realty Company on post cards that were widely distributed.  In this manner potential investors and interested parties could see the progress being made at Stone Harbor.  Also among those early Founders’ homes we see along First Avenue were two more, built in a Colonial Revival style, that belonged to Franklin Davis and Charles Farnum.  These very large structures were actually called “cottages” back in those days.

In conclusion, printer A. M. Simon at 32 Union Square, New York produced all three of these post cards.  The typography and layout designs are identical as well.  In the absence of a copyright date, official postal markings can often give the collector an approximate idea of when the photographer captured the images.  All 3 of these post cards were mailed and are postally used showing these dates in the order of their occurrence:  AUG 6, 1919, AUG 15, 1918 and MAR 26, 1946 respectively.  What’s really interesting is that the last of these 3 images was printed almost 30 years before it was mailed.  According to the hand-written message on the back of this card, my hunch is the Oakland, Calif. sender (which is where this post card was postmarked and mailed from) was an avid post card collector and he sought to incentivize or convince the Columbia, SC recipient in 1946 to swap or exchange post cards for their collections.  Pretty clever, eh?  So you see, once more there’s a story with every post card.