“THE CASINO AT 96TH STREET, LATER KNOWN AS THE OCEAN VIEW APARTMENTS”

The building that is portrayed in the accompanying five post card images enjoyed a fairly long history.  In fact it can be said that it not only withstood the test of 46 years of time right on the ocean, but that for many it became a sort of iconic building due both to its unusual structural appearance and to its longevity.  The Casino in my opinion has actually transcended several generations.  Not that the structure wasn’t tested by ocean storms and time over the years, but this building originally called the Casino was built at the time Stone Harbor’s boardwalk was dedicated in 1916.

Despite its 46 year history, this writer is presented with the reality that very little specific information is known or has been recorded and preserved about this rather interesting building.  Aside from some personal and very distant memories from yesteryear, perhaps old photographs taken during family vacations and a handful of different picture post cards mostly from the 1920s depicting this very building, that’s about all the information that is readily available.

Over the years this building located on the boardwalk until 1944 at the end of 96th Street and the beach, has been called different names including Casino, Ocean View Hotel, Ocean Front Apartments and finally a rooming house, all with great ocean and beach views not to mention a most convenient location with easy access to the beach as well as the center of the business district on 96th Street.  While surviving the horrendous hurricane of ’44 which actually destroyed Stone Harbor’s entire boardwalk, the Casino managed to survive until it met its demise during the severe storm of 1962, some 18 years later.

It is important to know that the array of five post cards shown here have been arranged in a chronological sequence. The first of the five post card images selected was produced in 1916 and consists of a mosaic of three images that feature three boardwalk scenes especially including a small photo inset showing the newly built Casino on the occasion of the dedicatory event of the boardwalk on July 4, 1916.  The caption on the reverse side of this card further indicates that Stone Harbor’s boardwalk was built by the Borough at a cost of $35,000, was a mile and a quarter long and was fully illuminated with electric lights or lamp posts which are evident in this image.  In addition to the Casino Hotel, the construction of this so-called “esplanade” provided the promise of fishing piers, amusement and even business places that were scheduled to be built.  In fact, the Casino was originally intended to be used for social amusements and one can imagine that included card games and perhaps other forms of gambling.  However that purpose was short-lived and soon thereafter the building was converted to a hotel.  With the ocean on the right, one can also see the beach and numerous houses and buildings along the beachfront to the left in this northward looking view.

The next three post cards also featuring the Casino/Ocean View Hotel/Ocean View Apartments were produced and mostly used for souvenirs and/or mailing correspondence mostly during the decade of the latter teens and the decade of the 1920s as authenticated by the dated postmarks applied to the backs of these cards.  Once again in all three views we plainly see the omnipresent and ever popular boardwalk.  One can see that over that early period of time new construction was carried out on the building and that some building additions, both front and back (first a one-story front lobby and entryway and later a second story in the form of an enclosed porch over the lower entrance), were created for more rooms and greater occupancy.

The fifth and final post card is a more modern chrome view that was postmarked on JUL 16, 1958 in the final days of this very structure’s usefulness (see gray building in the background).  Of course, the boardwalk is long gone and is but a distant memory! 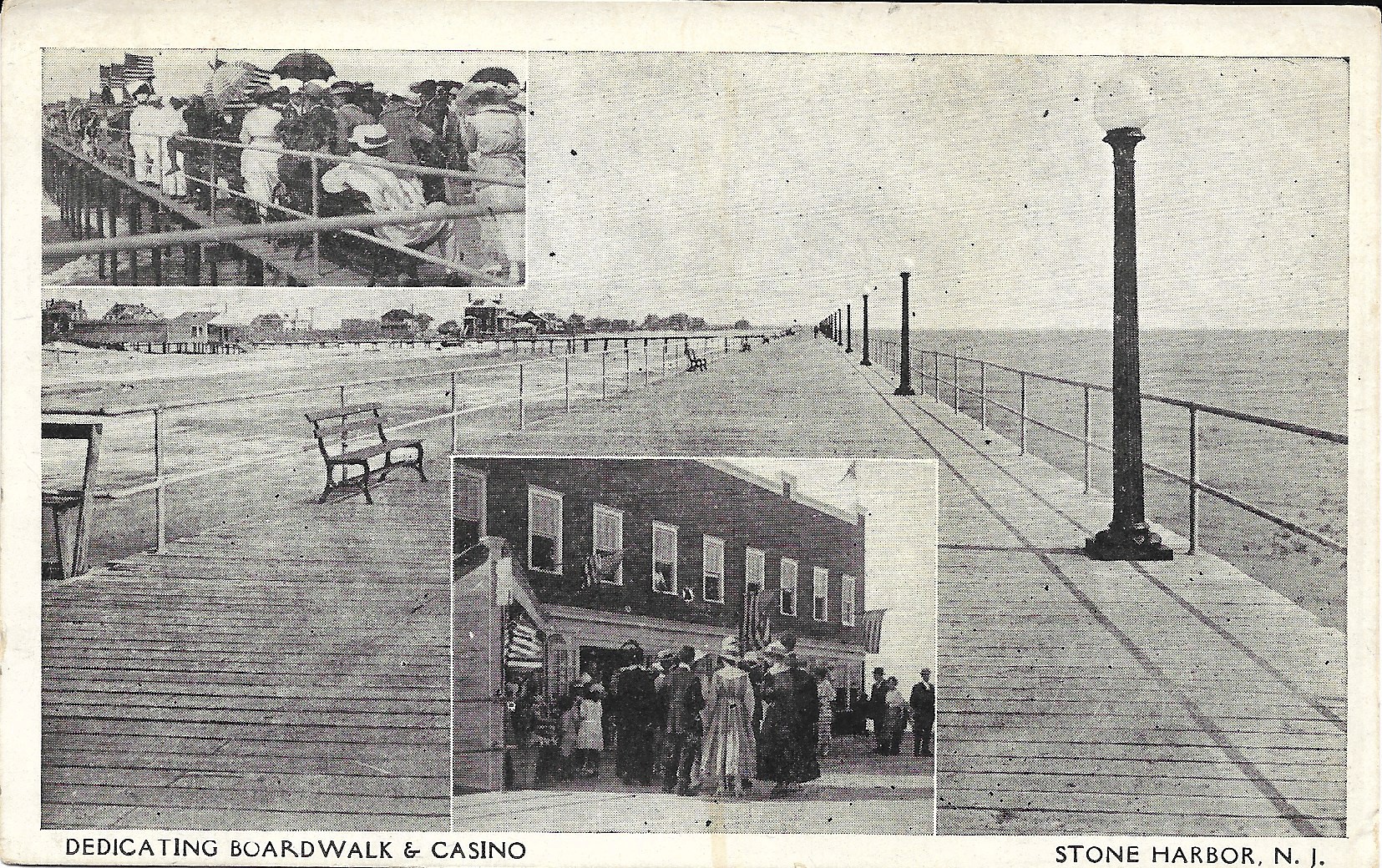 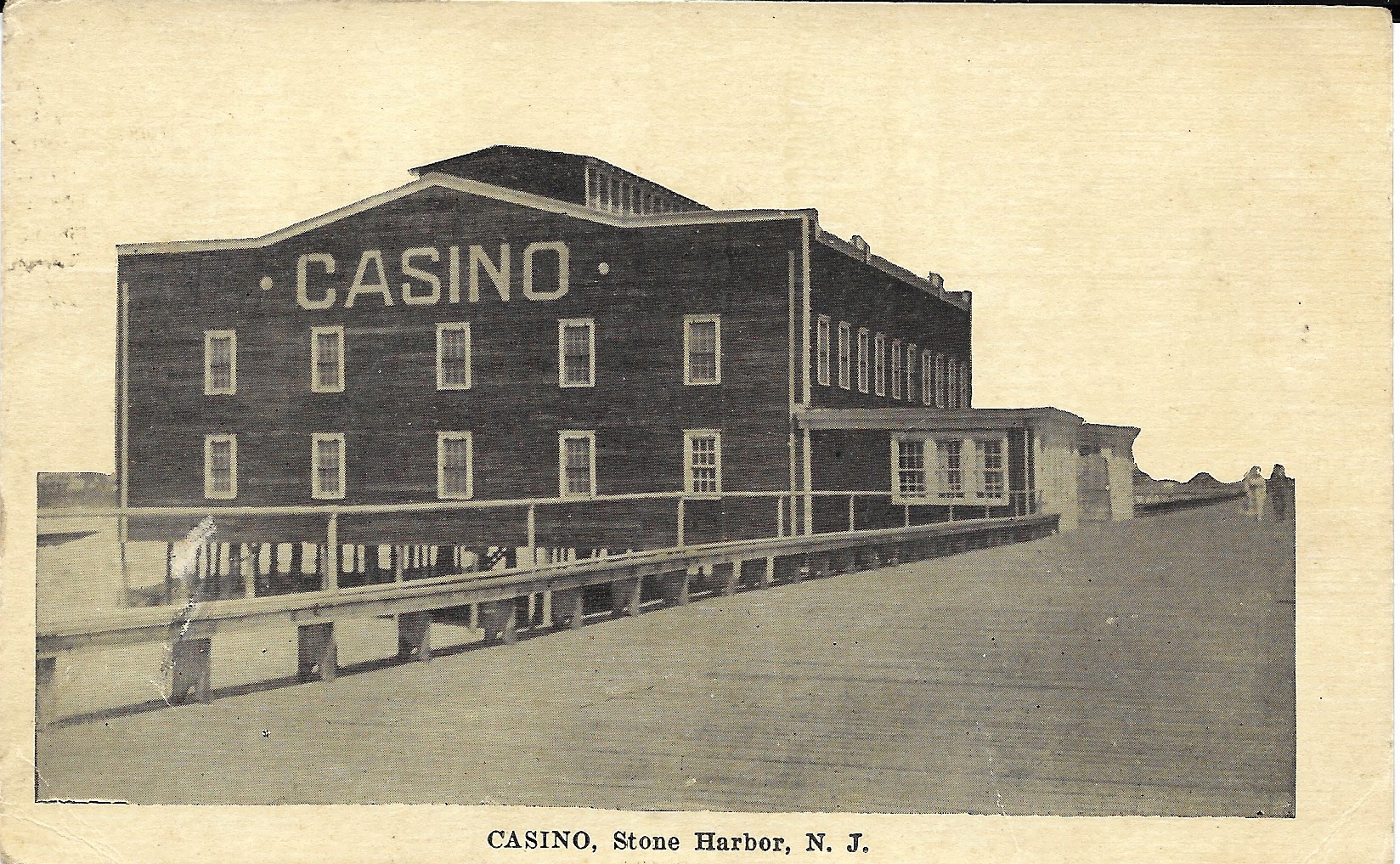 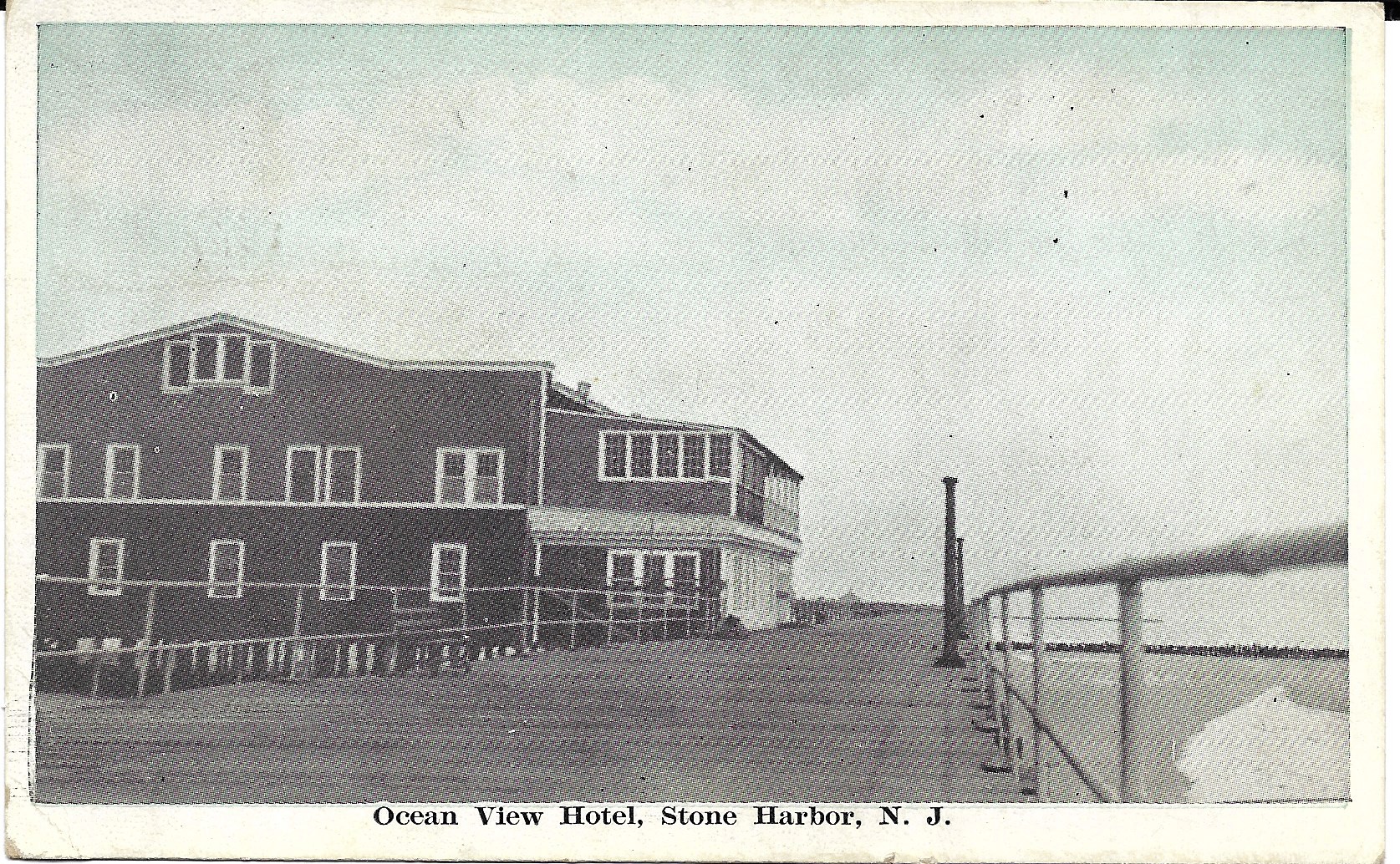 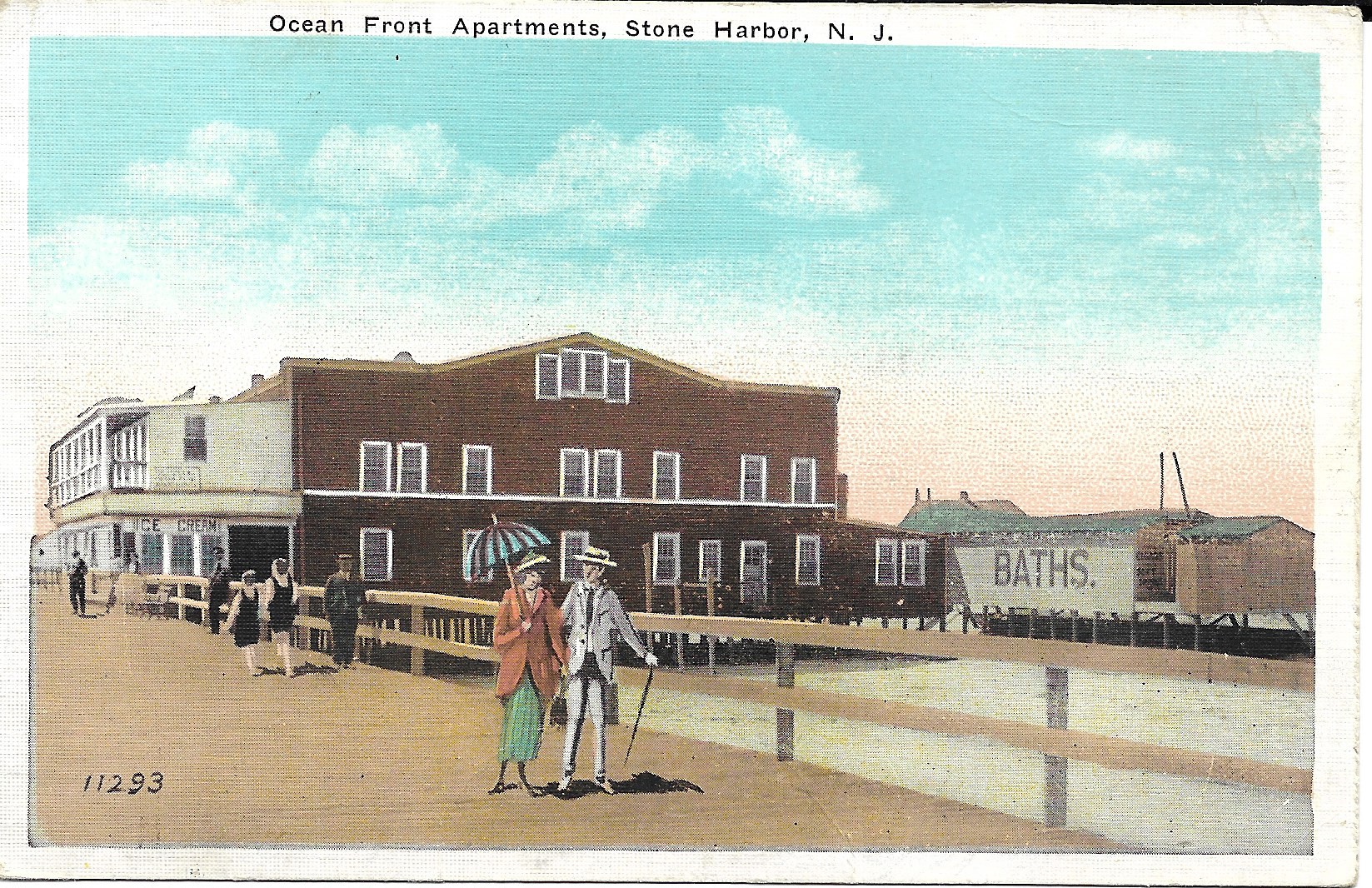 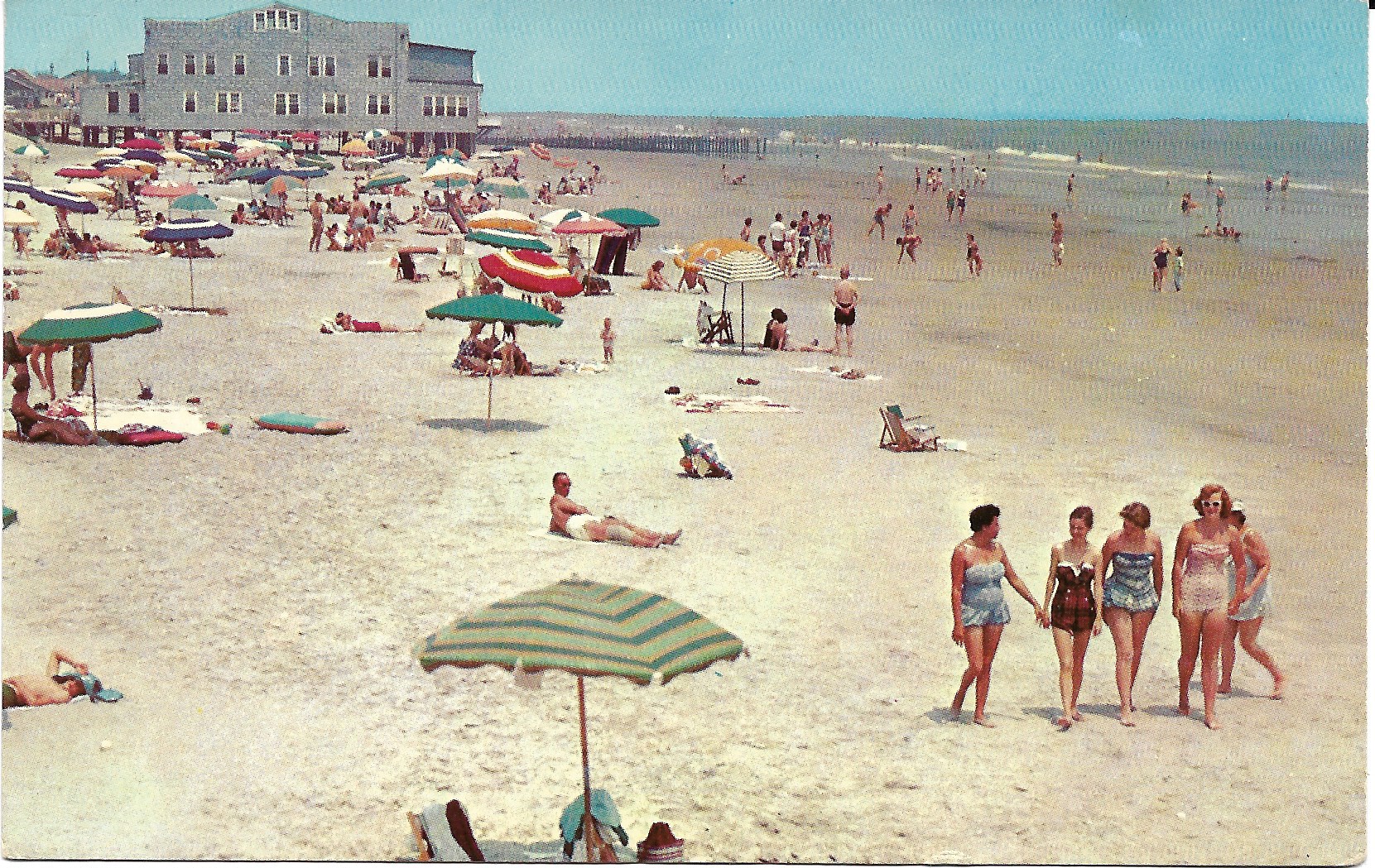