“BOARDWALK AND BEACH AT NIGH STONE HARBOR, N.J.”

Over the years this collector has only seen 3 different post cards depicting views of Stone Harbor taken during the nighttime hours. This brief account will feature two such post cards depicting the Boardwalk and Beach at night. The purpose of this short article is to offer what appears to be a somewhat perplexing matter of accuracy portrayed when viewing one of these two items.

The first image is an interesting post card which in my view warrants a close examination. Postmarked at Stone Harbor on AUG 13, 1939, this item at first glance suggests that perhaps a bit of contrivance has occurred. This nocturnal scene showing a full moon casts its light on the beach of Stone Harbor with the expansive boardwalk extending into the distance on the left side of this scene. However, an area of concern focuses on the man-made structure that appears to be extending from beneath and under the boardwalk, across the beach and well into the ocean surf. Take a careful look at this image. Is that particular structure spanning the beach from left to right and going into the water supposed to be a pier? Or perhaps a groin designed to protect the shore from erosion and loss of beach sand? Or maybe it might be a pipeline for rain water from the streets to run off and into the ocean? The fundamental question that might be asked is what exactly was the function of that particular feature?

Stone Harbor aficionados Graham Hueber and Jim Talone based on their strong knowledge of Stone Harbor are both inclined to believe that the structure extending from the base of the boardwalk and into the water “might be a fanciful illustrator’s idea of what an existing fishing pier looked like even though it is misplaced and hopelessly out of scale”. Upon magnification, it even looks like there are several persons actually situated on the structure in the area of the waves.

In any event, let’s move on and fix our attention to the second post card image presented here featuring a very similar nighttime view of the boardwalk and beach only lacking one prominent feature and also appearing with a few other minor changes or alterations. The pier or whatever one wants to call the structure extending into the ocean has now been removed and is no longer visible. The waves or the surf in the second image also appear to have been changed and made more dramatic and even bigger. Notice also the clouds in the sky have been somewhat softened in the second image when compared with the first. But the shadows in the sand and the moonlight illuminated on the beach appear to be identical as are the various buildings situated along the boardwalk. Finally, it might be worth mentioning that

the second post card was published by none other than local variety store merchant and proprietor David Troxel.

When comparing both these nighttime images, might you conclude that both post card images appear to be the same photo taken at the same time only with some alterations? Perhaps the man-made structure in the first card was an artist’s embellished attempt to add something to the view for aesthetic or artistic purposes. It should also be noted that even though the second image is undated and was not postally used, this linen- era post card suggests it was probably published sometime in the latter 1940s and at a time when the boardwalk itself was was no longer standing due to being destroyed by a colossal storm on September 14, 1944. Indeed there might be one thing we can all agree to regarding these two cards: the photographer who took the original photo of this scene was most likely standing on the fishing pier at 106th Street and was unmistakably aiming the camera in a northerly direction.

All this being said, this is the extent of what I know and can tell you about these two post cards. What are your thoughts about this matter and the apparent major discrepancy featured on the first of these cards? 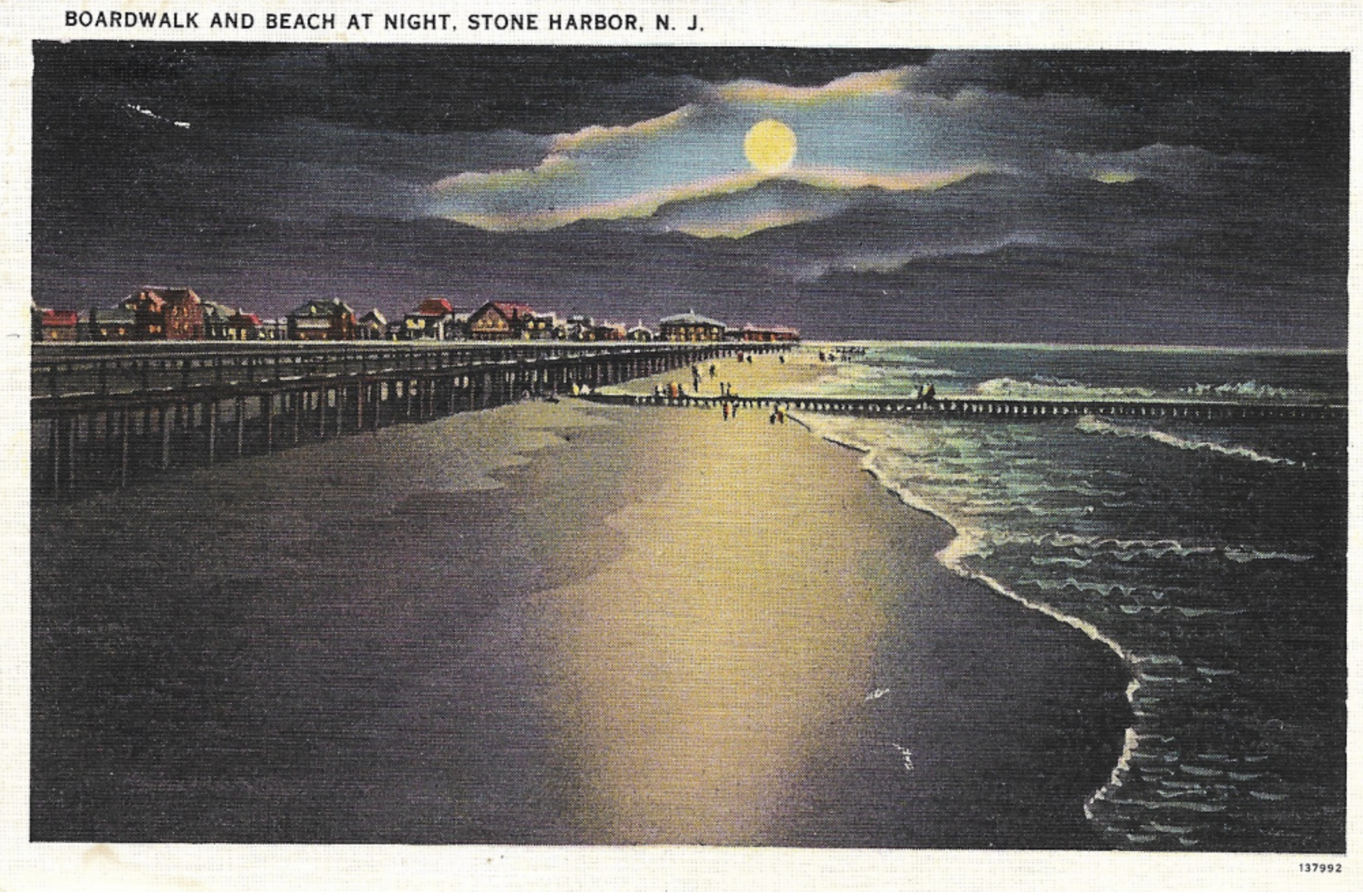