On August 1, 1912, a new hotel named the Shelter Haven  Hotel officially opened its doors for business and it  would become the largest building in Stone Harbor.  Without question this hotel would also become and  remain a dominant feature serving the community for  years to come. There are even those who would say  that the Shelter Haven Hotel was the most iconic  structure to ever be built in this charming seashore  community known as Stone Harbor. Whether there are  any other contenders for this honor remains up for  discussion and certainly a worthy subject for further  consideration.

This building was located at 96th Street and Third  Avenue and overlooked the Shelter Haven Basin  otherwise known as the 96th Street Basin. This 5-story  structure was a popular and convenient place to stay  and would become the so-called hub of the town due to  its central location on the boulevard that led directly  into the downtown business district.

Offering 60 elegant guest rooms, the Shelter Haven  Hotel provided many amenities including a dining room,  cafe, barbershop, poolroom, roof garden with splendid  views, and a private dock and wharf with excursion  boats operating daily service to nearby Anglesea in

North Wildwood. Over the years and until its demolition  in 1961, ownership had changed as many as twelve  times.

While there are many different post cards in existence  featuring the Shelter Haven Hotel over its 49 year  history, here is just a sampling of images showing the  hotel and how it looked connected to the resort from  different vantage points at different times.

The first image is one of the earliest known post cards  showing the Shelter Haven Hotel and was postmarked  AUG. 29, 1914.

The fourth scene highlights the exciting swimming races  that were held at the wharf and dock of the Shelter  Haven Basin. These popular summer events would  invariably attract large numbers of spectators as you  can see here. This post card was postmarked on JUL  19, 1929.

The fifth image depicts the hotel and bay with a group of  kids having fun hanging out and diving off the 96th  Street public float. This municipal swimming platform  was anchored in place only during the summer months  and was very popular until it was removed around the  time of World War II. For your information this card was  postmarked and placed in the mail on AUG. 18, 1936.

Finally, the sixth card produced during the latter 1930s  is an aerial view showing the hotel as well as the Great  Channel drawbridge and entrance along 96th Street to  Stone Harbor. This striking photo was obviously  snapped from atop the water tower at Second Avenue.  We can certainly be grateful that the water tower was  there and even available on occasion to serve as a super  vantage point for some fortunate photographers over the  years to snap a good number of photos of downtown  looking in different directions for use on future post  cards. 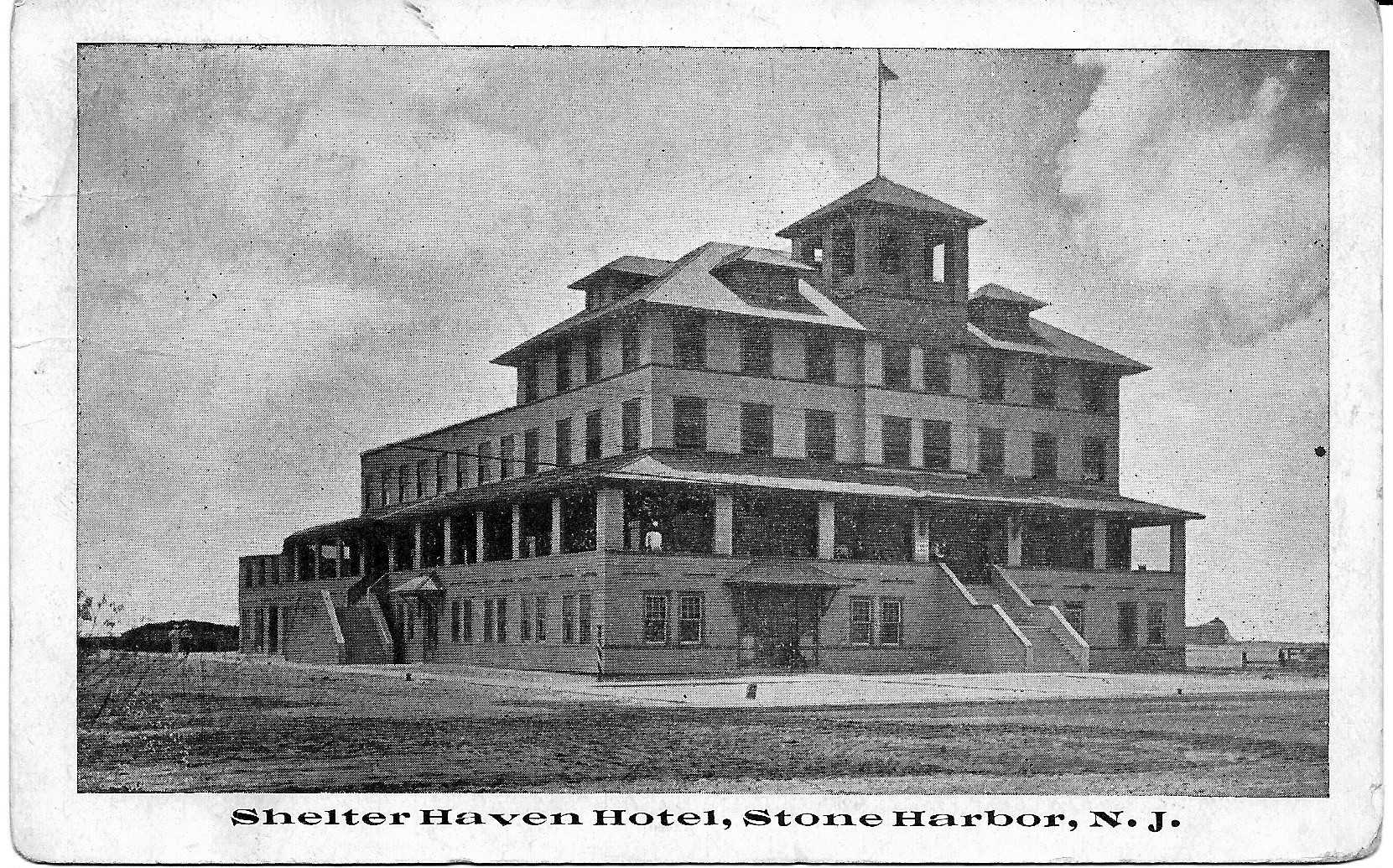 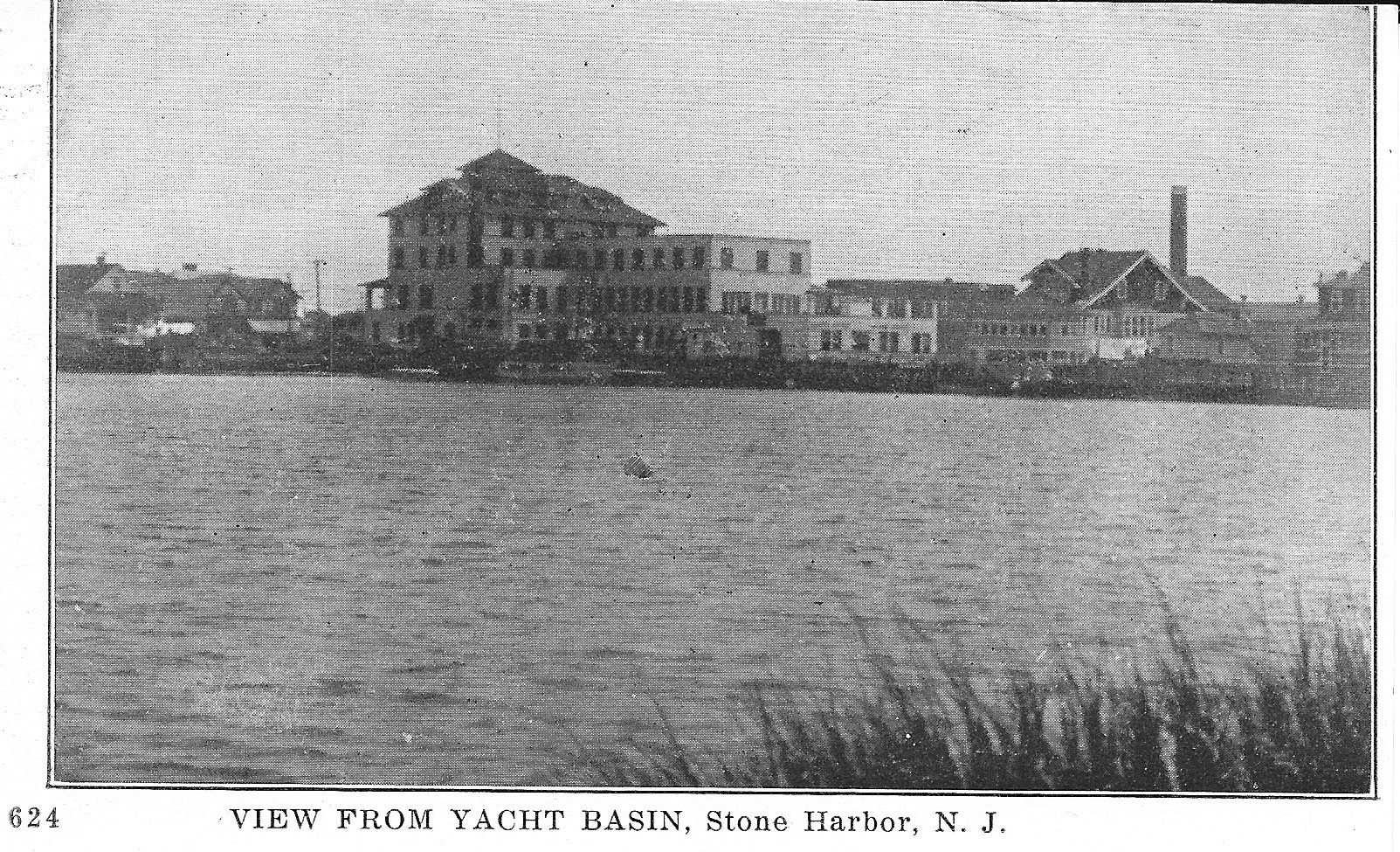 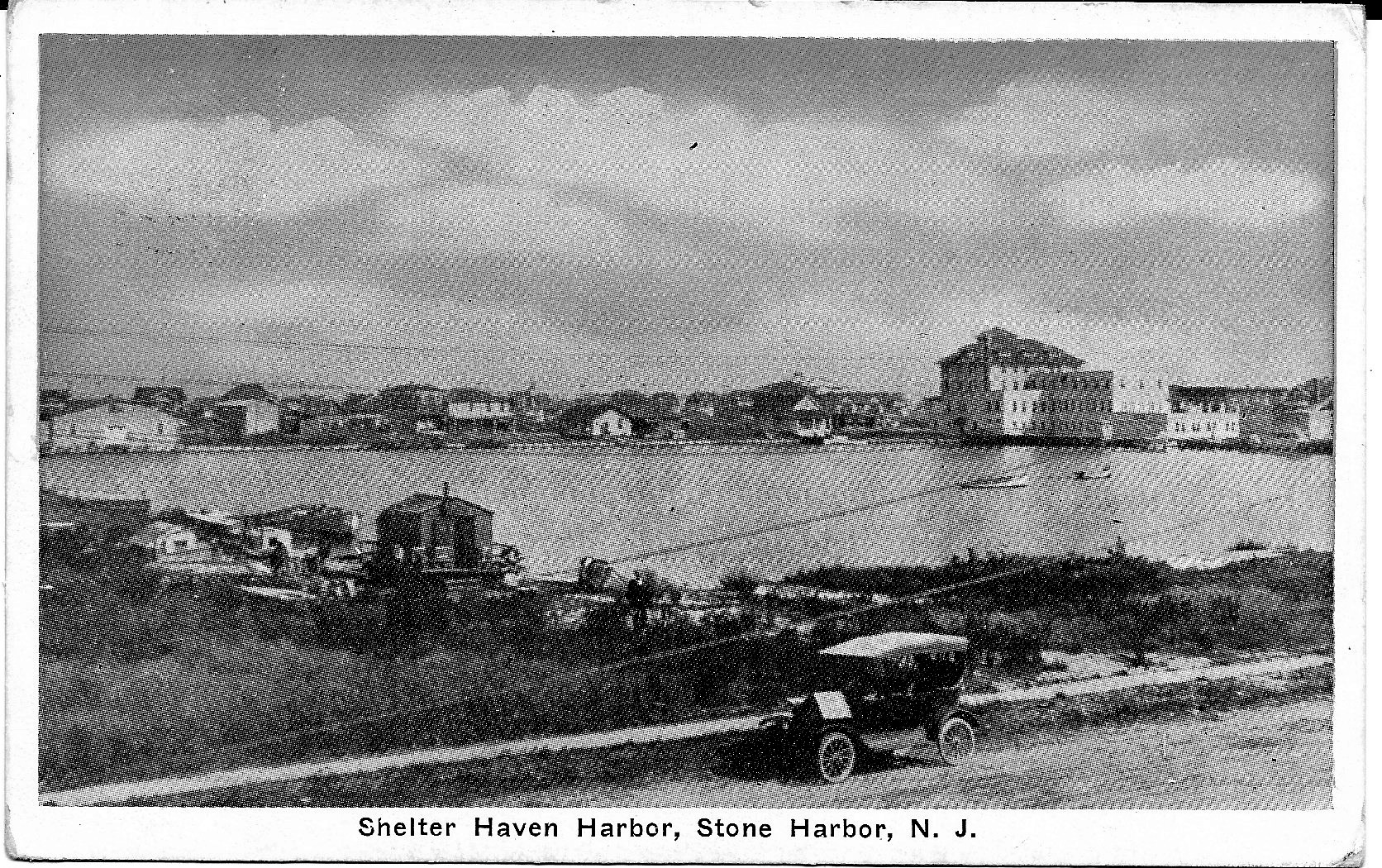 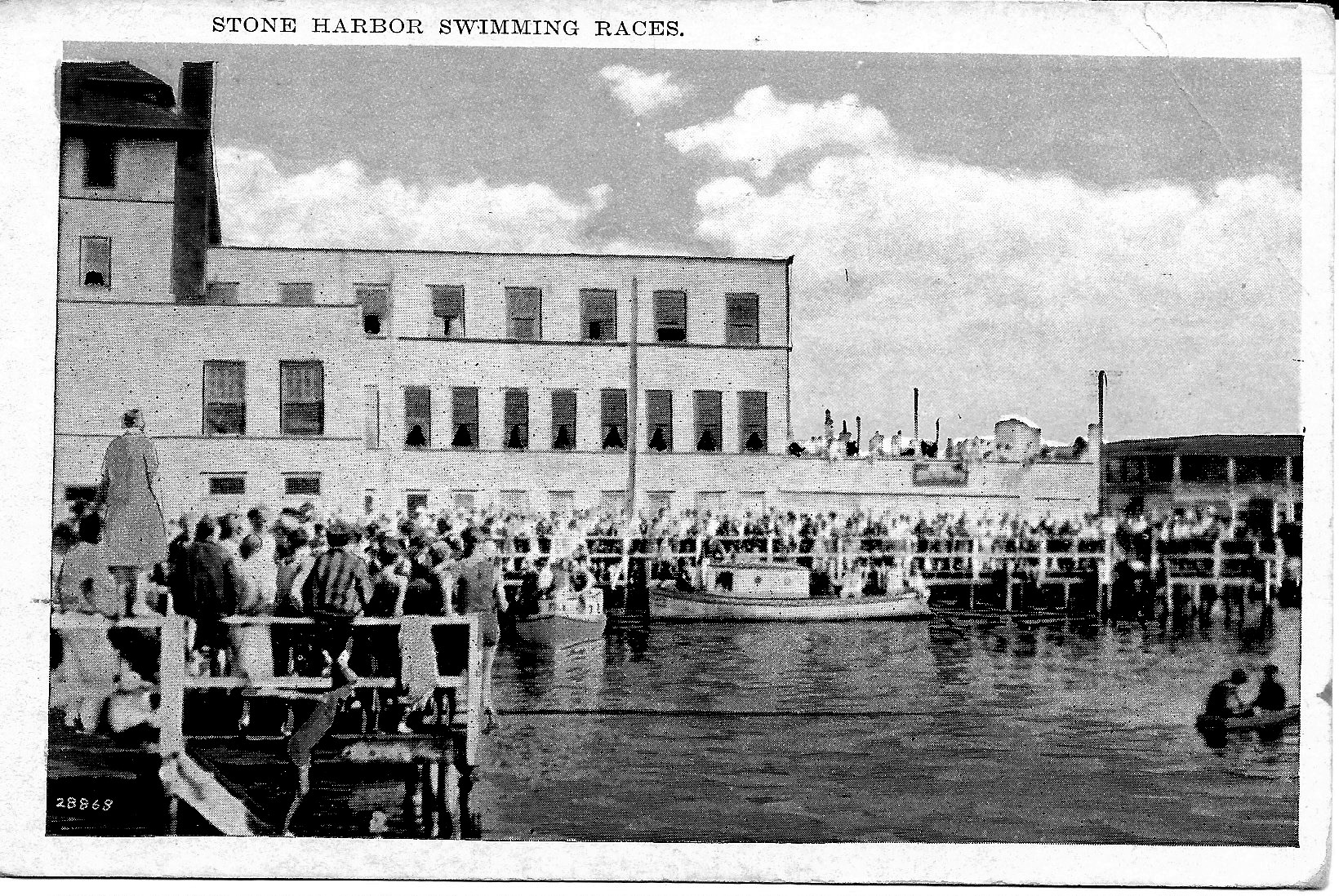 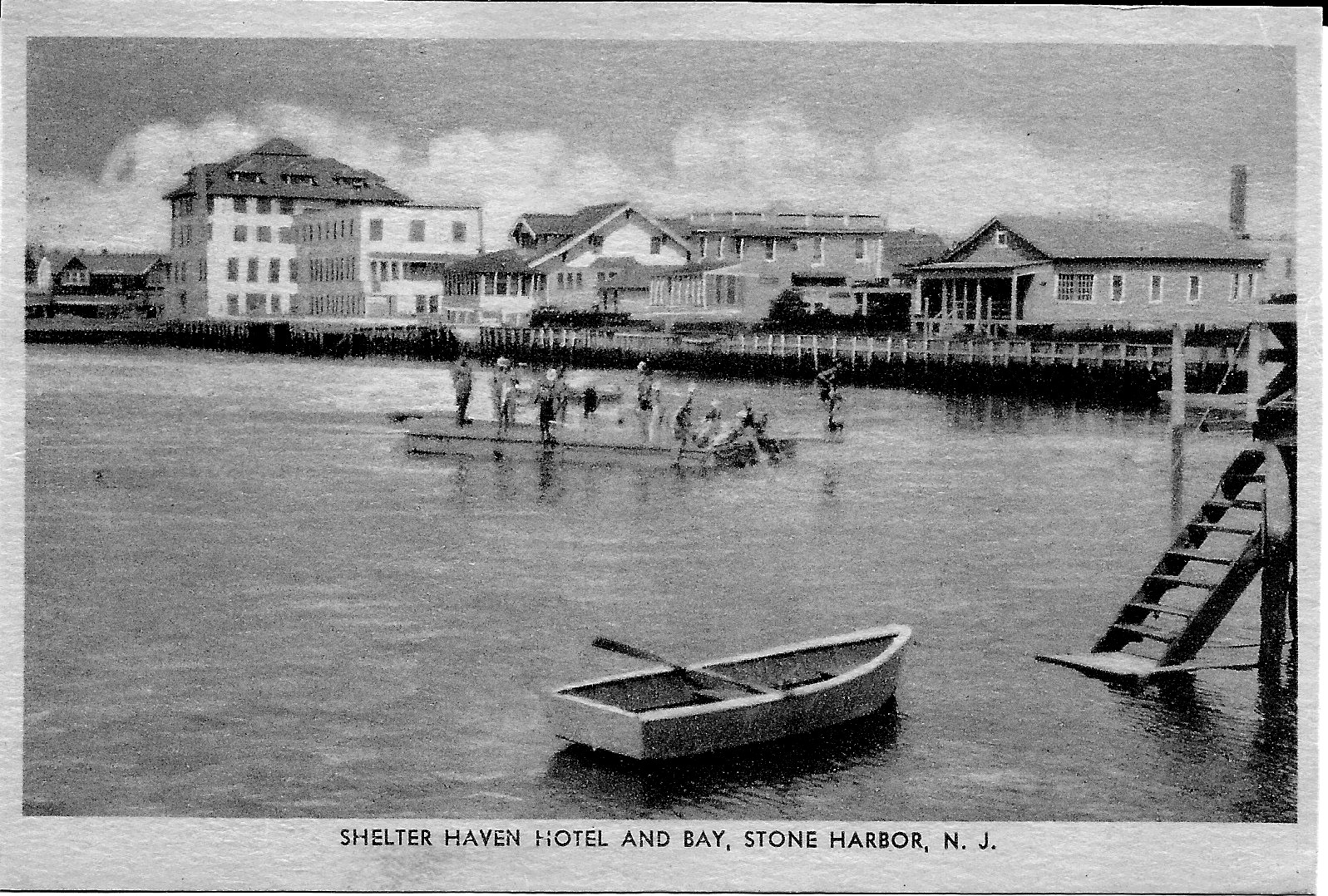 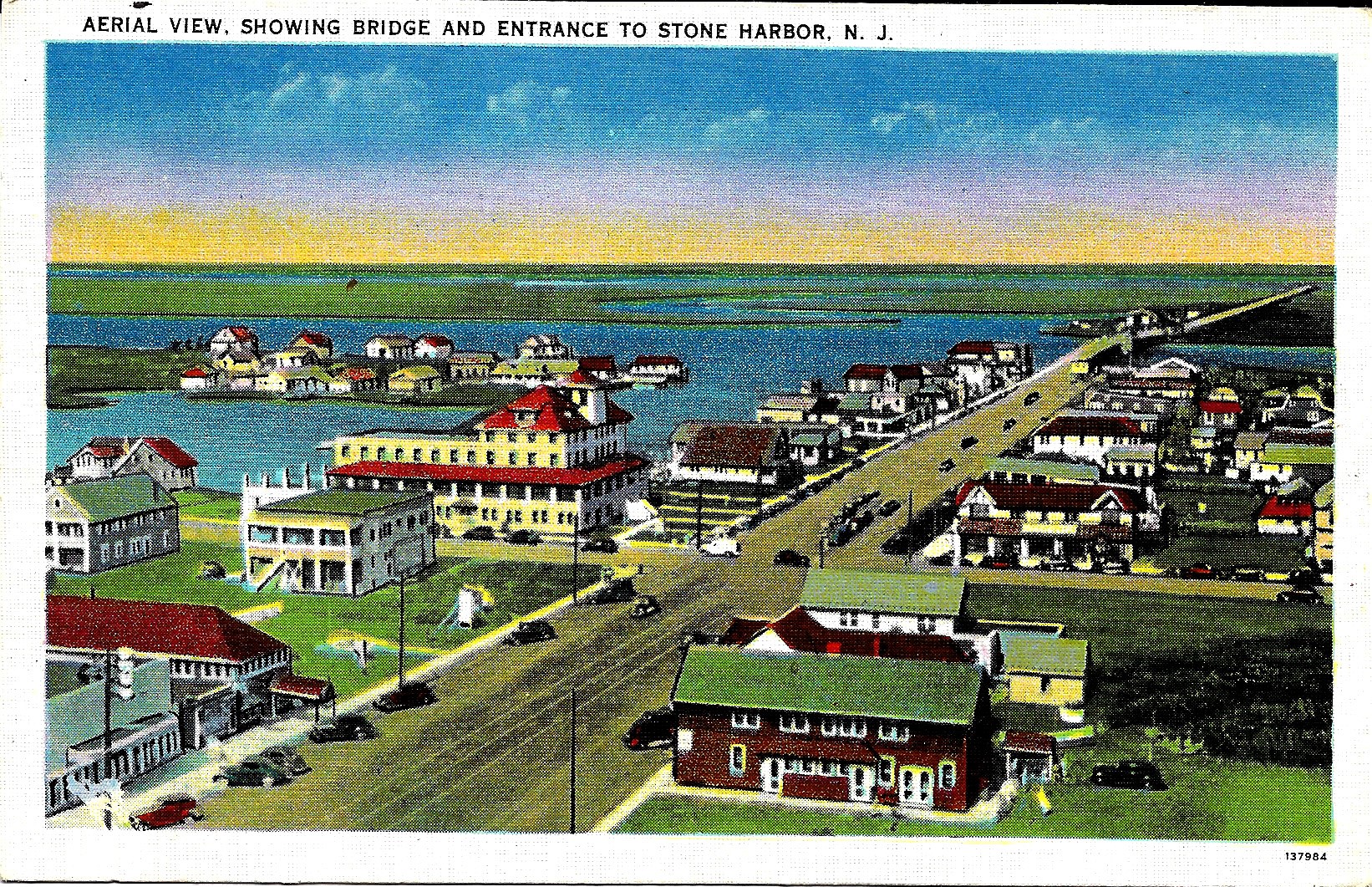