“TWO KEY ELEMENTS IN THE RISE OF STONE HARBOR, N.J.”

A reasonable place to begin any quest to learn about the  genesis of Stone Harbor as a seashore resort  community lies in the mechanisms that were instituted  to fulfill a vision created in the minds of a few prominent  business men.

The Risley Brothers set into motion a plan to transform  the barrier island of sand dunes, wide expansive  beaches and salt marsh at Seven Mile Beach into a  popular vacation resort. Some folks actually referred to  this new resort as being “Philadelphia’s Seashore  Suburb”.

Perhaps the question to ask at this point is two-fold: (1)  “Just how did the Risleys initiate and implement the  task of building a New Stone Harbor and (2) how did the  Risleys manage most importantly to provide people easy

access to the island in the first place?” Confronting  these two elements will be the key to their success.

Upon the formation of the SJRC in 1907, Howard, David,  and Reese Risley developed a clever marketing plan to  lure investors to purchase bonds in exchange for free  lots of land at Stone Harbor. The trick was to get people  interested and then establish a means for them to  actually go to lower portion of the island to see for  themselves the real potential and opportunities being  offered. However, getting potential investors there was  the first hurdle.

At this time an interesting phenomenon was taking  place and literally sweeping across our American  society. That phenomenon was Americans embracing  what became the immensely popular use and mailing  picture post cards. It did not take long before these  little messengers or couriers called post cards became  very useful to the Risley Brothers as they used these  cards for the purpose of advertising their venture and  generating interest. Thus over the first couple of years  the brothers using these promotional post cards mailed  for just 1-cent postage were able to show pictorially the  progress and the developments taking place in Stone  Harbor due to their great plan. The post cards also  served to enable interested persons to make inquiries  and seek further information about this vision to create  the resort called Stone Harbor. In addition to using post

cards, the SJRC bombarded the public in the  Philadelphia area with newspaper advertising and  offered potential investors with free excursion trips to  the shore to see for themselves what was happening at  this “up and coming” seashore resort. There are even  numerous post card images showing the throngs of  people who took advantage of those free excursions and  visited Stone Harbor for themselves with an eye on the  promise of future development. Those post cards will  be presented at another time.

It became apparent that a very important part of this  early development plan hinged on providing a means for  connecting Stone Harbor with the mainland. Originally,  a rail line was proposed but that soon gave way to a  more feasible elevated roadway. Built in 1912 and  dubbed “The Ocean Parkway” initially and later called  “The Stone Harbor Ocean Parkway,” a suitable  boulevard was completed, formally dedicated and  opened extending from Cape May Court House and  making it possible for people to more easily come to the  island. And come they did!

Shown here are the fronts and backs of several different  post cards all utilized by the SJRC for the sole purpose  of promoting Stone Harbor and attaining their goal.  While the main theme of all these images is basically  the same, each card shown here is somewhat different  and represent variations depicting the much talked

about Stone Harbor Ocean Parkway and the numerous  modes of transportation that could be used to get to and  from Stone Harbor. These cards really do present a  pretty picture of the hope and promise of the new resort  community and such post cards really were  instrumental in fostering the early development of Stone  Harbor. With the advent of automobiles, the American  public took to the roads and enjoyed opportunities most  had only dreamed about just a few years before.  Perhaps it can then be said, the rest is history! 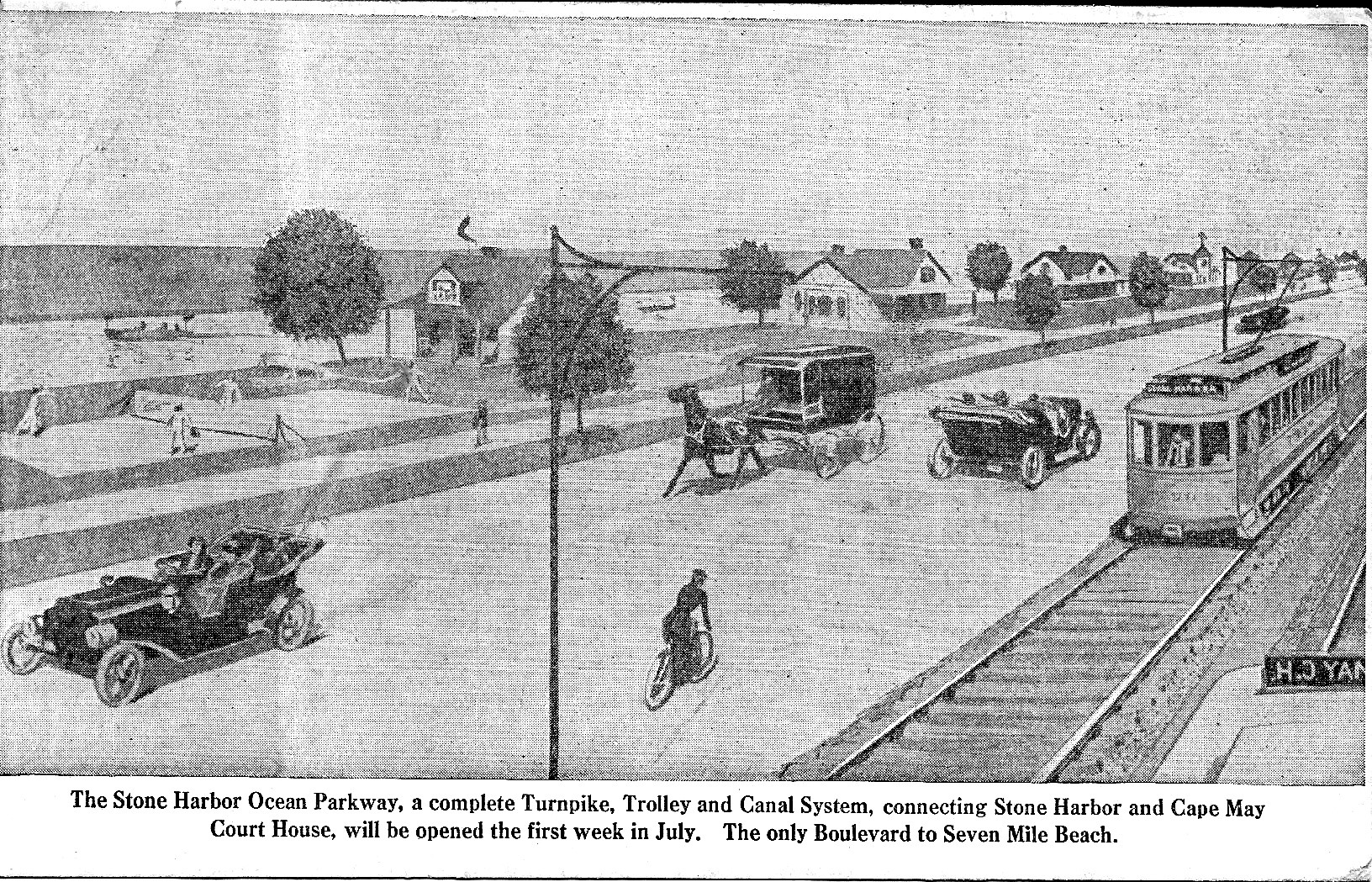 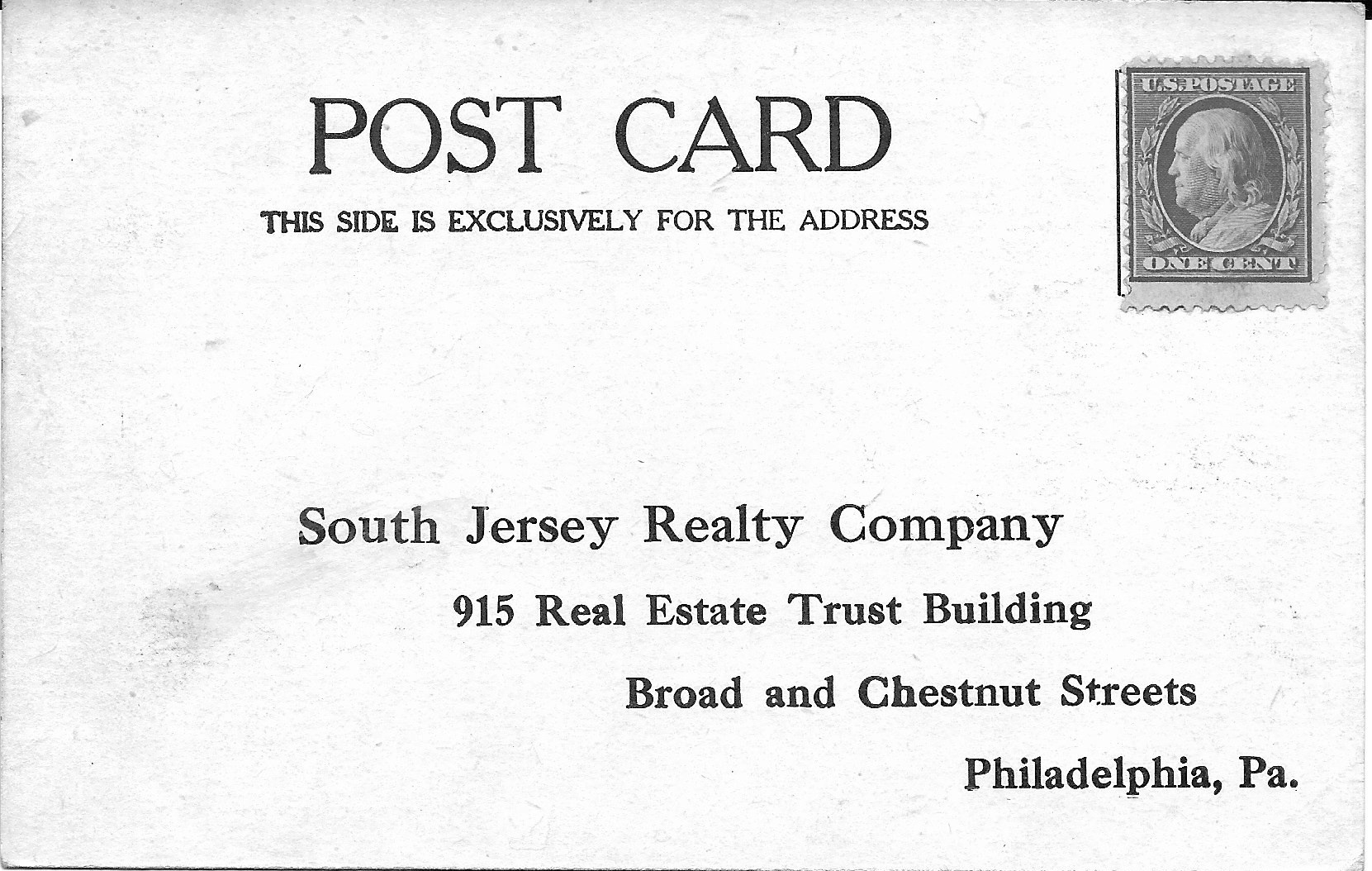 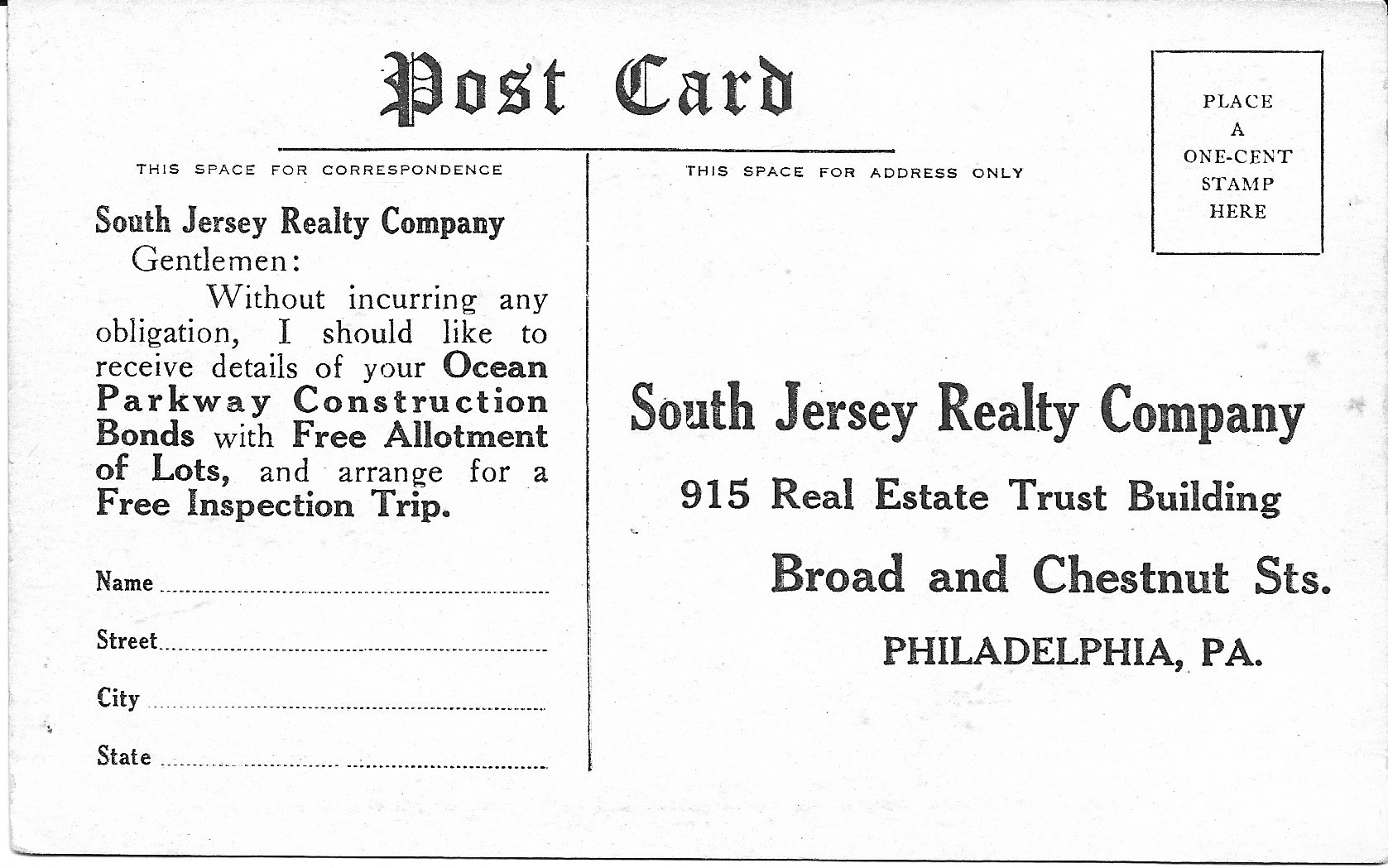