As the population of Stone Harbor started to grow, there developed a need for stores and other business enterprises to provide needed goods and services. The commercial development of Stone Harbor really began in earnest around 1912 with continued housing construction and easier access to the island community first by train and then especially by automobile. A so- called commercial center or “downtown” would begin with the construction and opening of the Shelter Haven Hotel in 1912 and before long 96th Street would become the primary shopping district. As one source put it: “This vibrant shopping district exists because the Risleys recognized even though Stone Harbor was planned as a resort community, people who chose to make their permanent homes here would need more than just souvenir shops”. That same source goes on to state: “As true a main street as one can find, Ninety- Sixth Street is the heart of Stone Harbor”. That being said, let us now turn our attention to just one amazing Stone Harbor post card.

The photo for this particular post card titled “General View at 96th St. and 3rd Ave.” was obviously taken from the tower of the Shelter Haven Hotel overlooking the intersection of 96th Street and 3rd Avenue and looking

in a northeasterly direction toward the ocean in the background. This very interesting circa 1920 image of the likes which probably none of us have ever actually seen in real life clearly reveals considerable undeveloped land in this immediate area that is soon about to undergo a significant transformation. In the lower right foreground we can see the not yet removed remnants of the Stone Harbor Railway tracks running along 96th Street which had at one time served Cape May Court House and connecting with the mainland. Aside from the group of children who are standing in the street beneath the “Welcome to Stone Harbor” sign, there is virtually no vehicular traffic at the time this photo was taken. Focusing next on the lower left corner of this scene we recognize yet another one of the very early businesses which was known as the Seaman & Letzkus store situated on the corner of 96th Street and 3rd Avenue.

However, there are several additional features worth noting that appear in the background of this post card image. The large three-story building on 3rd Avenue shown in the upper left was originally called the Duval Hotel. Then a short time later that hotel building was converted to apartments and became known as Turpins Apartments. After that and around 1939 the building was changed over to become the well-known ice cream shop called Springer’s Ice Cream Shop which is still in existence today to the delight of many, both young and

old. The second of the two large buildings behind the Duval/Turpins/Springer’s building was Stone Harbor’s Public School No. 1 with four classrooms, located at 94th Street and dedicated for opening in 1915. As we shall later see, there are many more images available showing the 96th Street business district that both demonstrate as well as document how quickly stores were built during the 1920s and 1930s and moreover how those remaining open areas of land along 96th Street all but disappeared! 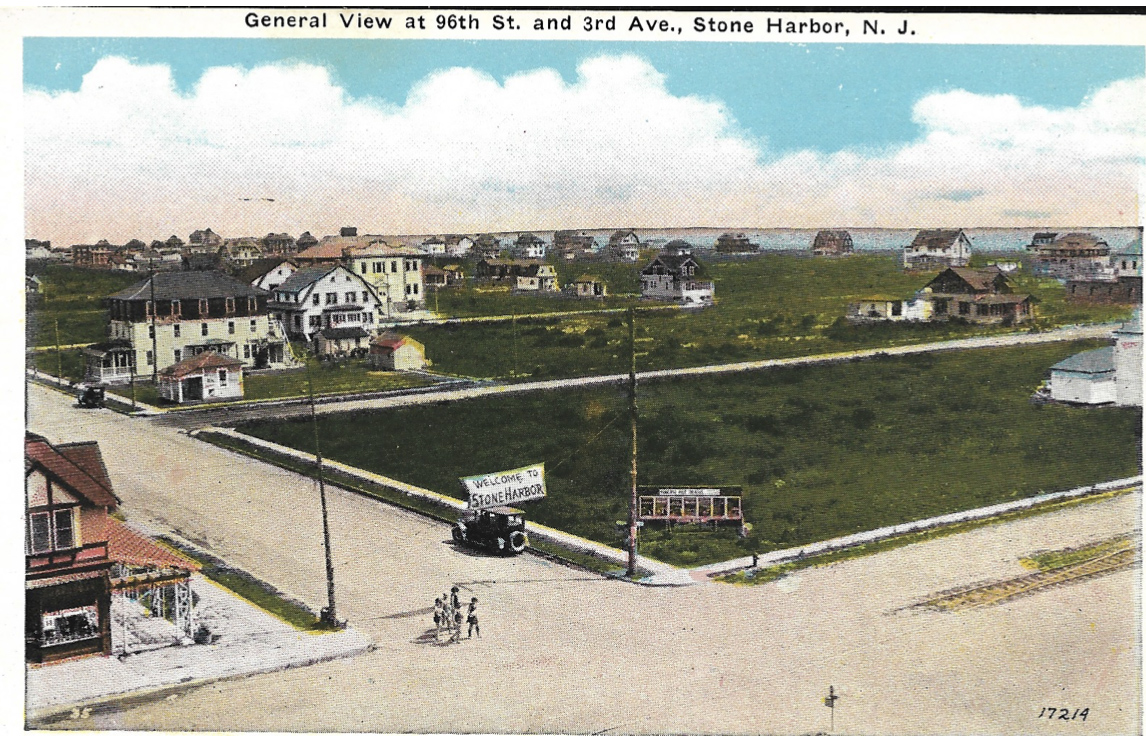