But where and how did it all begin? Like any good plan, it started on paper with streets and avenues laid out in a rectangular grid pattern and the in-between spaces identified with block and lot identification numbers. Working with the development name of The South Jersey Realty Company the Risley brothers, Howard S. Risley, President, Reese Risley, Vice President, and David Risley, Secretary-Treasurer, were the “architects” who put pencil to paper and designed their seashore community. The realty company had been established as a New Jersey corporation in 1897 and took the title to the land in September 1907. In addition to a hotel, there were only four cottages in existence as their development began. Stone Harbor today is seen just as they planned it with numbered avenues running north and south and numbered streets, east and west.

Surviving examples of early 20th-century souvenir picture post cards display many of the fine examples of Stone Harbor’s architecture as the seashore resort began its earliest stage of development.

The main focus of this brief account will be to feature just one vintage post card. An artist’s rendition of the “New Stone Harbor / Watch It Grow” appears in this early post card image and it is not all that far removed from what would become a reality as Stone Harbor slowly started to evolve. Printed in Germany, this rare

aerial view shows lots of details including the impressive and stately Harbor Inn along with numerous large private homes and even invites its recipient to receive details about the development “Without incurring any obligation.” Now that’s a great sales pitch!

Careful examination of this post card image also shows us an elevated promenade or the forerunner to a wooden-plank boardwalk that would eventually be constructed in 1916 and endure for just 28 years along the beach and the ocean front. In the background it is possible to see a road or causeway designed for trolleys, trains and automobiles connecting the mainland to the island along with a channel drawbridge and entering the town at 96th Street. It is also apparent that this aerial rendering places the center of the new Stone Harbor further north at around 80th Street or thereabouts and closer to what would become Avalon.

However, some of the structures illustrated here never actually came into existence, notably a lighthouse on the Great Channel or bayside, a sizable amusement pier jutting out into the ocean with some tall-masted sailing ships moored at the end of the pier, a merry-go-round close to the beach, a massive railroad train station, as well as an amusement hallmark in the form of a large Ferris wheel also facing the ocean. Somebody clearly had a great imagination when considering all these great features. 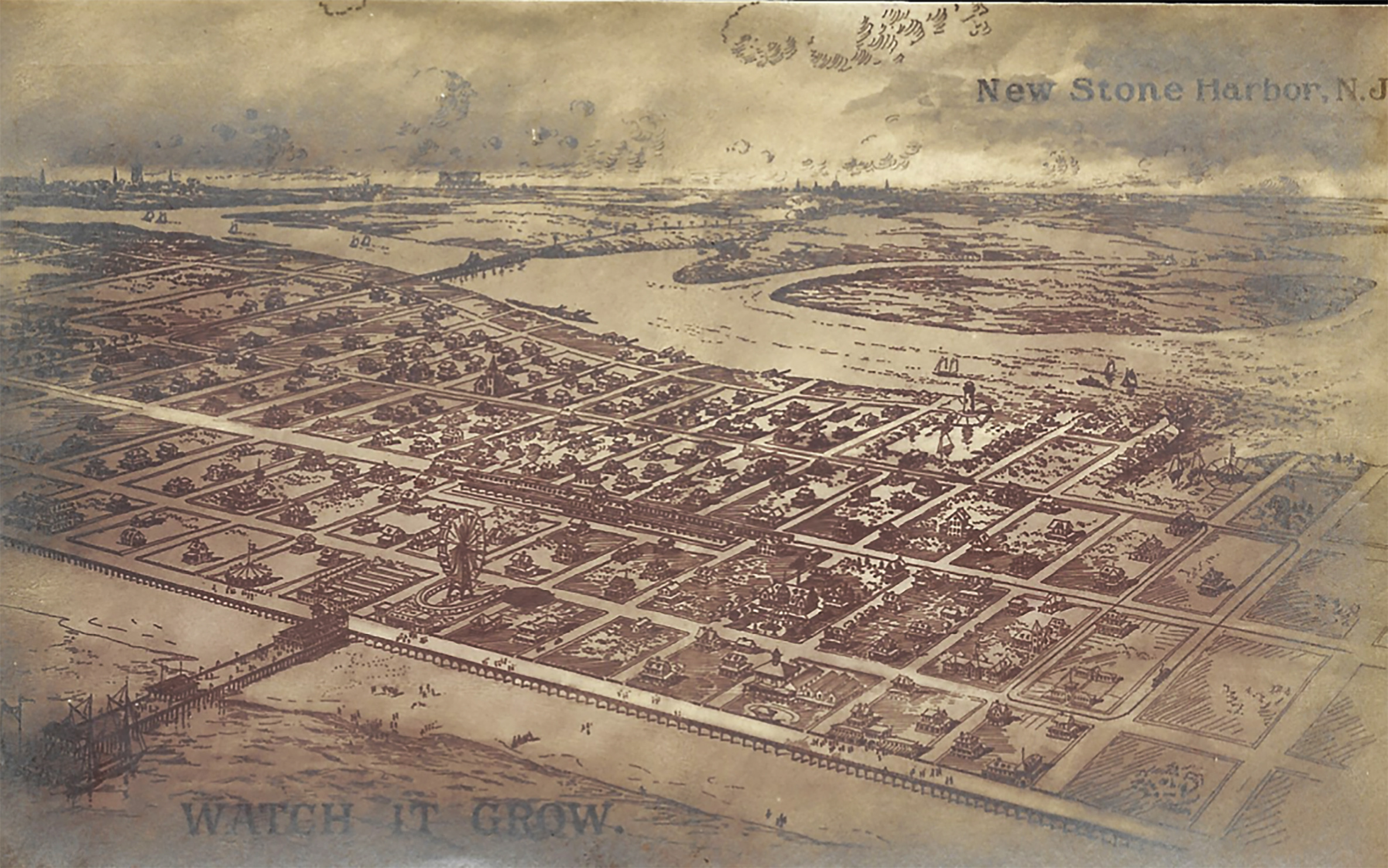