Information and details about the two buildings featured here are sketchy at best and so we frankly do not have much to go on.  What we do know is the popular Alba Apartments were located on Stone Harbor’s boardwalk at 106th Street near the southern-most end of that fine wooden and elevated promenade.  As we can see from the three accompanying post card images, the Alba Apartments were situated directly across the boardwalk from the Municipal Pier that housed some small shops and a theatre.  All three of these boardwalk photos were taken looking northward with the ocean being on the right-hand side of each image.  There are very few different post card images that actually show both the Alba Apartments and the Municipal Pier Theatre at Stone Harbor and consequently such cards are in relative short supply and seldom seen.  Hopefully you will enjoy looking at these special scenes.

The first post card image reveals a quiet and fair weather scene depicting a few persons including most conspicuously a mother and daughter who appear to be in the foreground and posing for this photo.  Their attire is indicative of and suggests another warm day at the Jersey shore.  A bit further away in the distance where the boardwalk makes a slight jog or bend northward and behind the woman and young girl are what appear to be a male in a dark suit possibly walking with a few others.  Due to the lack of clarity it is difficult to ascertain just how many persons are actually apparent.  My hunch is this photo was taken in the mid-morning hours judging from the casting of the shadows of the metal hand-rails on the edge of the wooden boardwalk with the sun rising on the east over the ocean to the right in this photo.

As you can readily see the next two post card images show people leisurely strolling the boardwalk with the Alba Apartments (misspelled as “Abla” in the captions on the upper borders of each card) on the left and the majestic Municipal Pier extending out into the ocean on the right.  Sadly, the moment of truth came when the Great Atlantic Hurricane of 1944 was responsible for destroying both of these buildings as well as the entire length of the 1.5-mile-long boardwalk.  We also know that the Stone Harbor boardwalk was never rebuilt.

At this time I should especially like to point out some very interesting features about and between these two images.  The two post cards produced in color which are most similar in format, basic orientation and subject matter are rather intriguing as they seem to suggest that one of them has been altered in several ways and not so artfully either.  Can you see what I am referring to?

I would ask the viewer to look very carefully at each of these images with special emphasis on comparing the placement and the relative size of all the various people portrayed.  One of these images does appear to reveal seams or lines in areas where new portions of photos were actually inserted in a mosaic fashion onto certain portions of the entire picture.  This somewhat crude or rather obvious technique of overlaying photo segments onto another image might be called an early form of “cut and paste”.

That being said, we have yet another example of two more David Troxel published images, especially including one that has been changed and perhaps even updated for somewhat greater appeal.  There are what appear to be four persons who appear identically in both images while there are some other persons who have been either completely removed or even added.  It looks as if someone just randomly “dropped” or “sprinkled” persons onto the last image.  In addition, an astute observer will notice the differences in the clothing styles worn by some of the persons depicted.  The real challenge is to ask what differences and similarities do you see?

For the record, the third and last post card image seems to be the updated and altered image that now has a distinct air of casualness although there are more persons in this particular scene.  This card was postmarked at the Stone Harbor post office on AUG. 19, 1926 and placed in the mail bound for an Altoona, Pa. recipient.

BONUS:  As an added bonus, I am including two more even older images that show the Alba Apartments, the boardwalk and the Municipal Pier at 106th Street and the beach.  While these two additional images may at first glance look like post cards, they really are not.  Both these images were derived from what is called a “Souvenir Folder” that contained in this case a total of ten Stone Harbor scenes all on one continuous fold-out piece of paper.  The paper stock that these images were printed on is thinner and less durable than a post card.  It should be noted that because there is another image on the other side of each image in the folder, a special provision was made by adding an outer cover or folder for mailing purposes.  The protective outer folder allowed space for writing the mailing address and applying postage and the entire grouping of fold-out images were actually glued at one end to the inside of the folder so as to stay intact.  Generally there was no provision for writing any messages but some years later these folders would contain descriptions of each of the individual images contained in the folder.  While more costly than individual post cards, souvenir folders soon became popular because even though they were pricier than single imaged post cards, they actually depicted and offered a variety or numerous different scenes (up to 20 in some instances) of a given place or subject.  Imagine the delight of the recipient going to their mailbox and retrieving such a folder and seeing not just one image but rather 10 or even 20 different scenes of a given place!  One would have to conclude clever merchandising!

Do you remember as a child having and seeing what were called “View-Master Slides”?  While you needed a hand-held viewer and adequate light, the circular slides embedded with 14 images provided the viewer with seven different color photos.  The difference was essentially the View-Master slides were viewed in 3-D or 3 Dimension while that obviously was not the case for images contained in souvenir folders.  But the concept was similar – multiple scenes compactly arranged.

Feast your eyes on this “View of Boardwalk” scene and imagine what a delightful and relaxing time these men and women were having as they enjoyed their day at Stone Harbor by “walking the boards”.  Perhaps there was some shopping at the several small stores on the pier or taking in most likely a silent movie featured at the theatre located behind the shops.  You can also see the electric lamp posts installed for illumination at night.  This photo as well as the next image may well have been taken around 1920 or shortly after the boardwalk and the Municipal Pier were built in 1916.

Finally, the focal point of this last image captioned “Municipal Pier” is the structure that extended out in from the beach over the ocean.  This view gives us a better idea of the size of the pier and the buildings on it.  The young girl and the woman shown here on the left side of this image both seem to be enjoying the sunshade derived from their light-weight parasols.  Judging from their clothing it must have been a rather warm and sunny summer day at Stone Harbor. 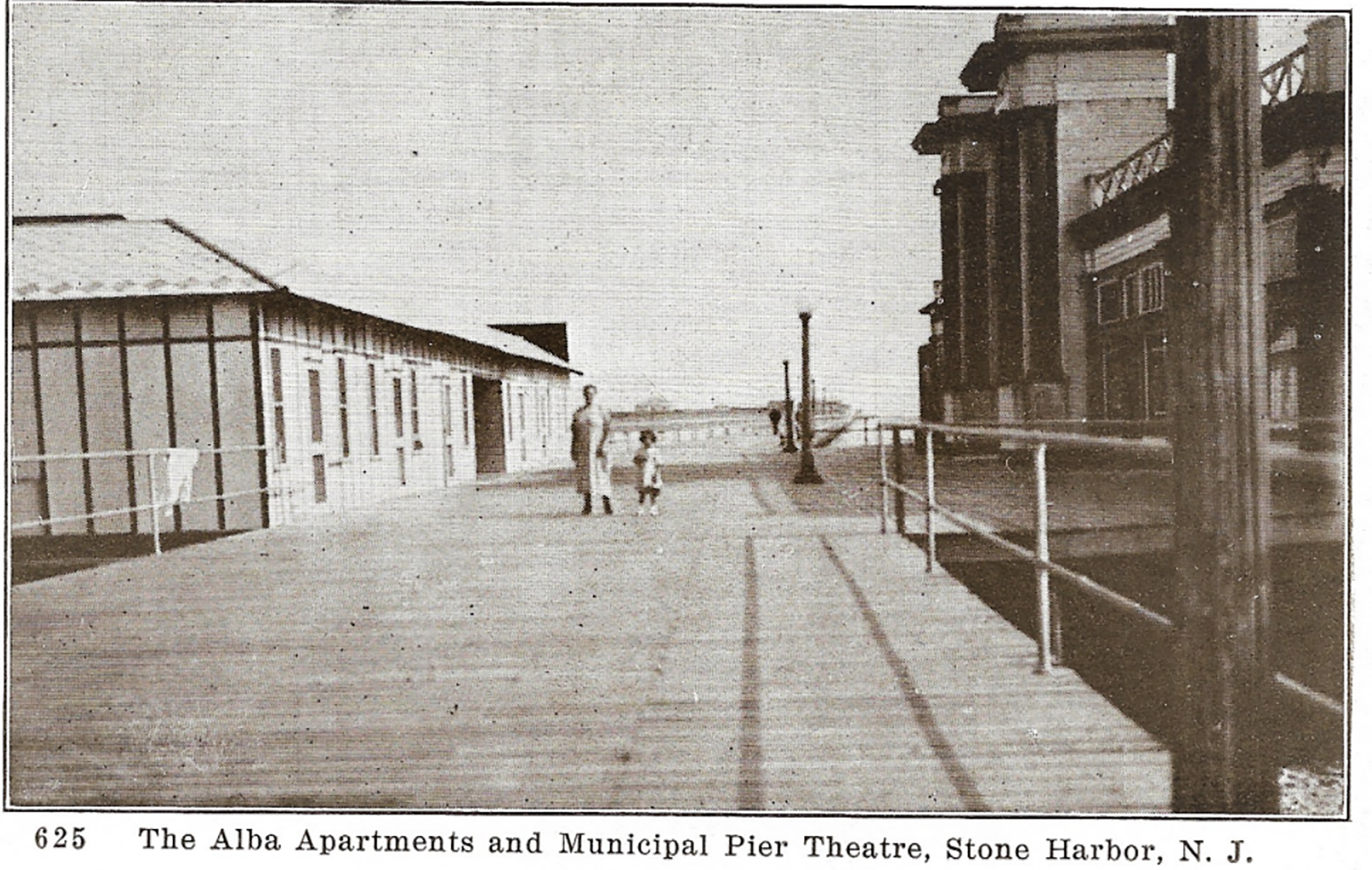 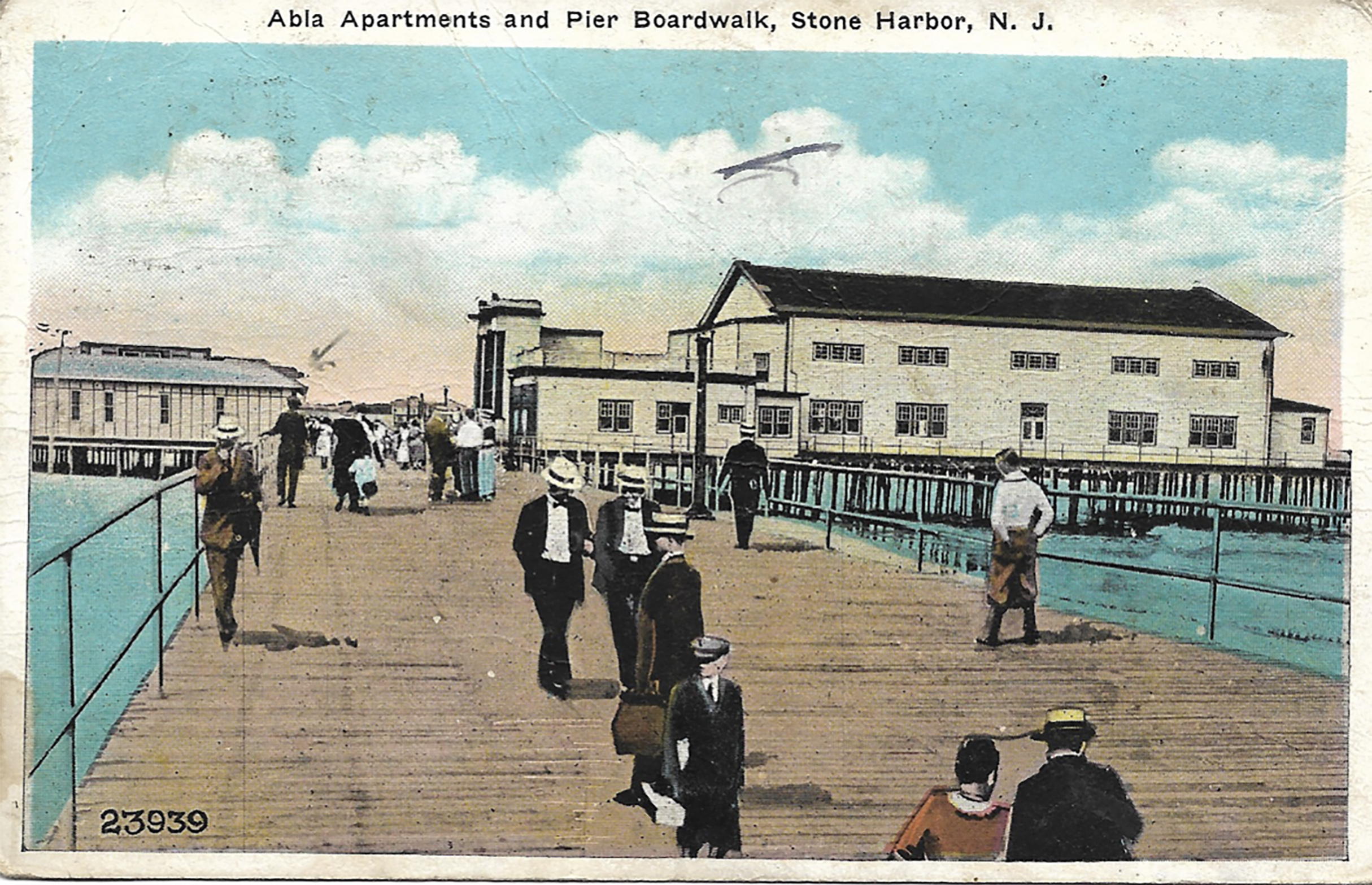 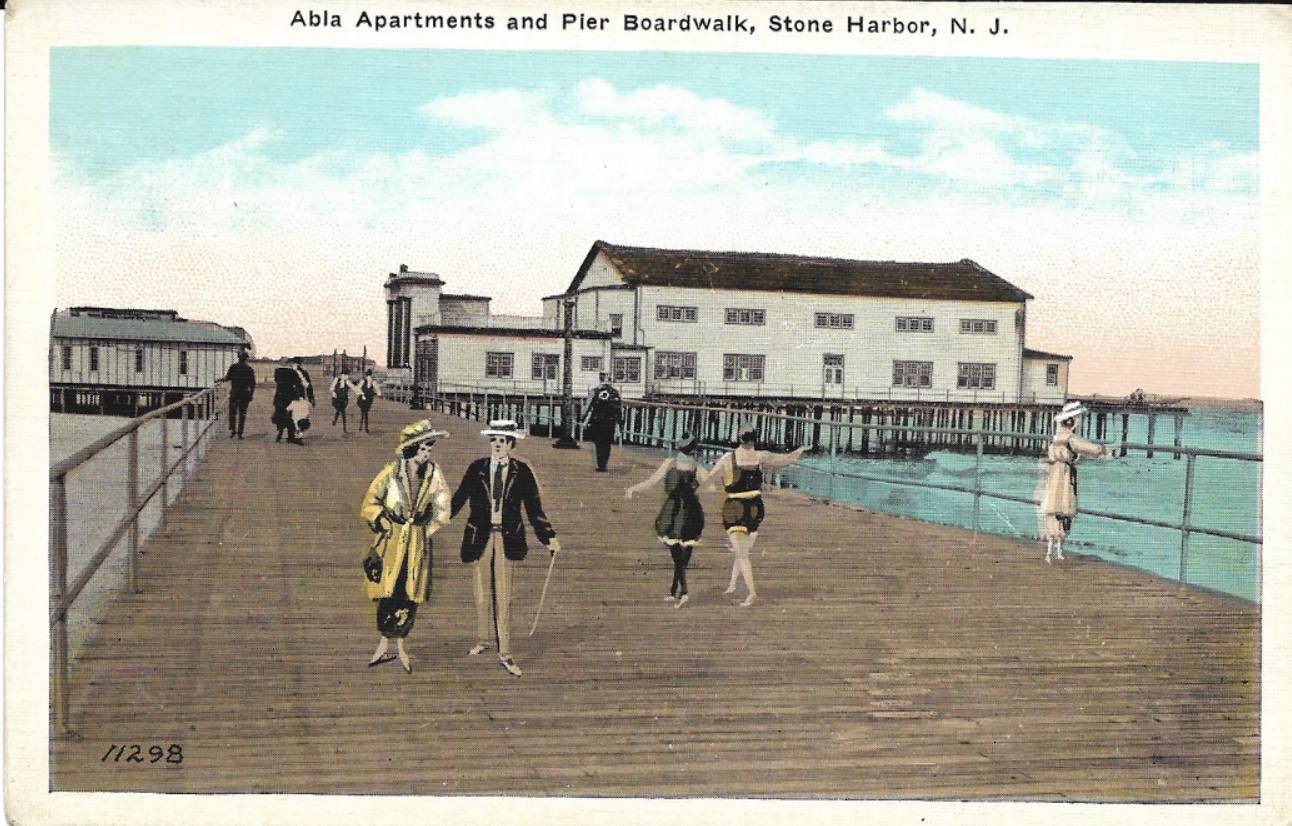 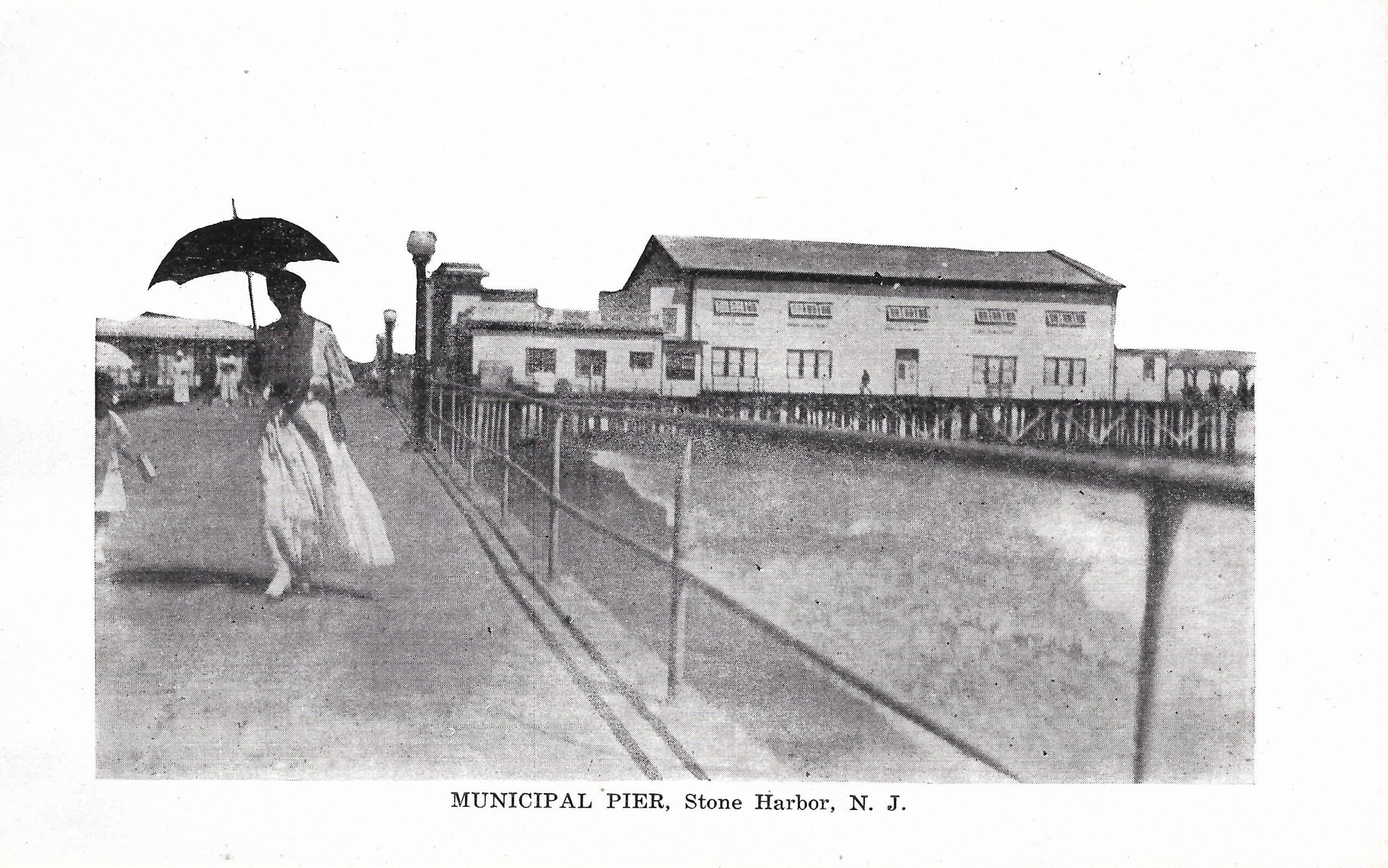 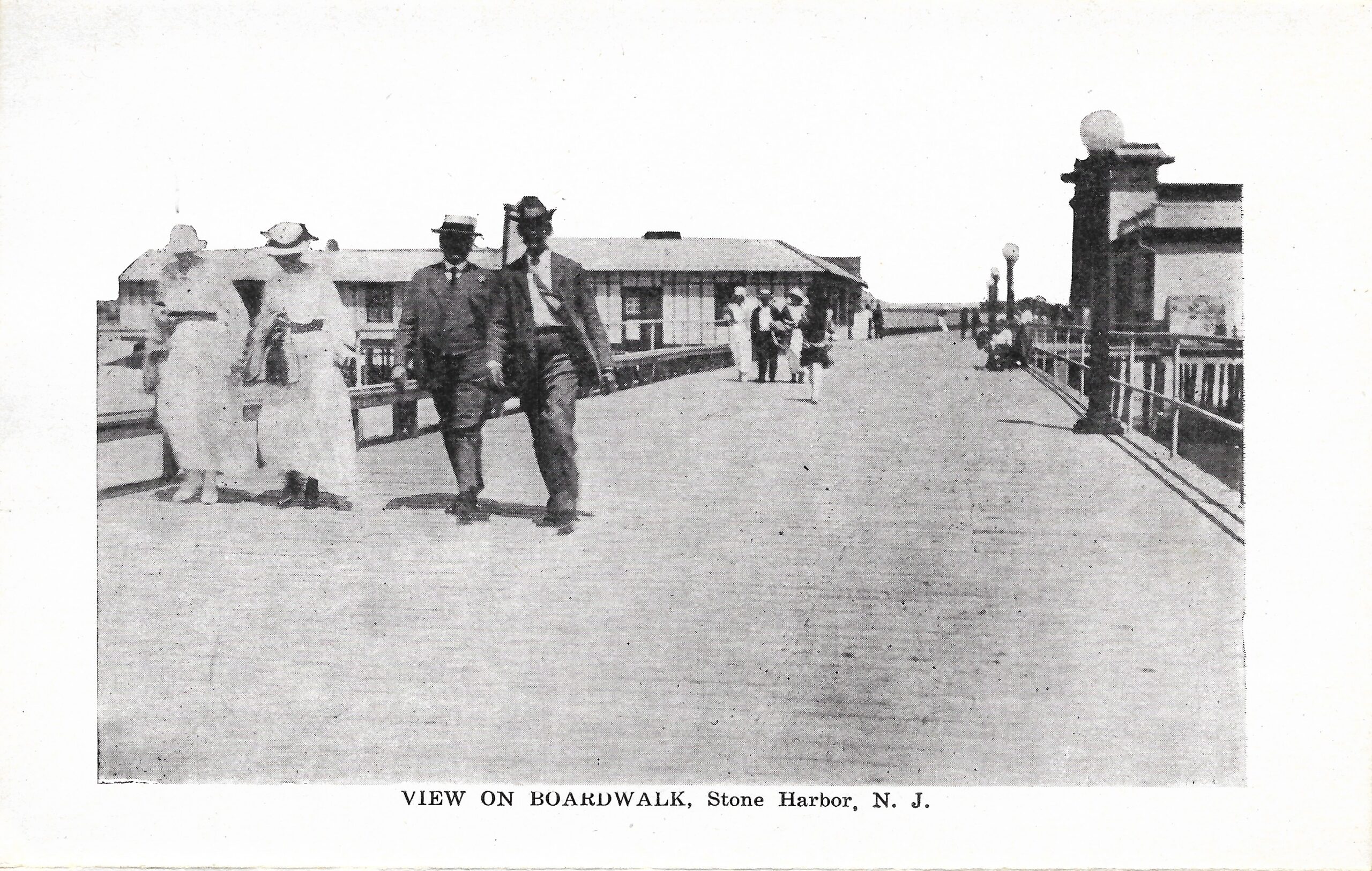