“RUMMEL’S STORE AND POST OFFICE (with Temple Guard on Porch)”

The post card shown here depicts a large 4-story building known as Rummel’s Store that also served for a short time from 1894 to 1910 as a U.S. Post Office. This postally used item bears a Stone Harbor postal marking dated DEC. 15, 1908.

Located at 83rd Street and Second Avenue, this structure was very close to the Abbotsford Inn (later re- named Harbor Inn) shown here in the background to the left. The sign over the steps leading in to Rummel’s Store reads “Ice Cream” and there’s a strong likelihood that the group of young lads relaxing in the shade on the left side of the porch are enjoying some ice cream treats themselves. But just who are these young uniformed boys and exactly what brought them to Stone Harbor of all places to be photographed on this particular occasion?

A bit of research however was necessary for this author to answer these and other questions. According to local and Philadelphia area newspaper accounts we learn that the boys, mostly around 16 years of age, were part of a group known as the Temple Guard. This group was a military-type organization associated with the Grace Baptist Temple in Philadelphia. On this very occasion we learn that 30 members of the Temple Guard spent a two-week encampment with their leaders at Stone Harbor during the period of July 13 to 27 of 1895. At that time the boys got a taste of a soldiers life by drilling, marching and engaging in other regimented activities.

Furthermore, it is our understanding that during their summer encampment this Baptist Boys’ Brigade had a daily routine that consisted of drills, dress parades and inspections, observing rank and following commands as well as performing duties along with some hard work projects. But the newspaper accounts also indicated that the monotony of the military discipline and competition was relieved by social functions, baseball games and other athletic events. There was even some musical entertainment and evening campfires with singing. All of these activities were deemed necessary for developing a strong sense of comradery among the group. Their founder and leader was Reverend Russell H. Conwell who was a veteran of the Civil War and who saw in his “little boys” as he put it the future of his church. Simply put, Rev. Conwell promoted and fostered learning and understanding the value of strict military discipline along with training as a means to give young boys a foundation of life skills for their future lives.

Such quasi-military type activities were not at all uncommon for young boys to engage in at that time.

Finally, after one more close examination of this post card image, one notices that in front of the store there is an array of weapons, in this case three stacks of rifles grouped together and arranged in an upright position. There also appears to be a large marching drum there as well. In addition, on the right side of the wrap-around porch there is another group of people relaxing too and perhaps also enjoying some ice cream on that hot July day.

This photographic image certainly does record an interesting moment in time during the early years of Stone Harbor history. What do you think? 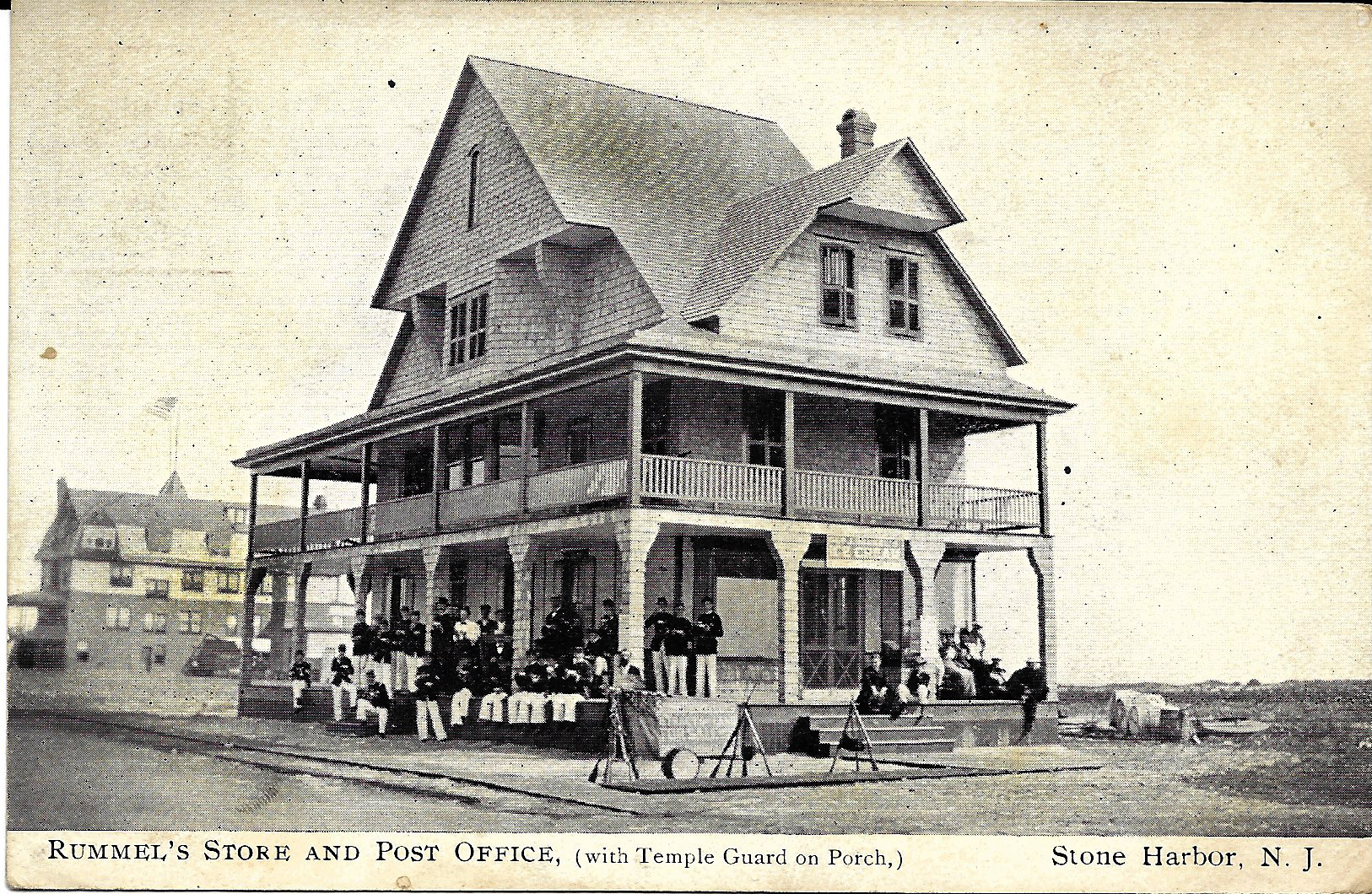