OF THE BOARDWALK AT STONE HARBOR, NEW JERSEY

To start, let us ask a few questions?  What is it that so often brings our attention back to a time when Stone Harbor had a boardwalk?  Is it the fact that the boardwalk is no longer in existence?  What actually triggers our minds to go back in time and reminisce about that very prominent structure? What was the charm and the vitality that so captures us when we think about Stone Harbor’s formative years?  It’s almost as if the boardwalk became an institution in a sense!  These and other related questions are for each and every one of us to ponder.

For some of us, post cards really serve a great purpose as they provide us with a fleeting eyewitness glimpse revealing something about life at a former time that just maybe we long to enjoy or just to re-visit.  At the inception of this brief article I would ask you to turn your attention to the first of three postcards, all postmarked at Stone Harbor in the decade of the 1920s.

An avid post card collector recently acquired this classic post card on eBay.  In it, a number of people find shelter from the summer sun under the boardwalk at Stone Harbor.  A young man in knickers, the woman in a long checkered skirt and summer millinery, the fashionable man wearing white slacks and shoes, dark jacket, bowtie, and fedora, and a number of bathers are each captured as they posed for this photo about a hundred years ago!  The penned message on the back states, “My nose is all red and it isn’t from drinking either.”  This post card depicts the popular Stone Harbor boardwalk shortly after it had been completed in 1916 and a while before the Great Atlantic Hurricane of 1944 destroyed it.

The boardwalk at the seashore resort known as Stone Harbor is a distant memory that very few can now recall.  The next two post cards to be featured now, and several more subsequent images to follow at a later date, serve as proof of the one and a half-mile long boardwalk from 83rd Street to 106th Street that once existed there for 28 years.  I have to believe that “walking the boards” at Stone Harbor was substantially different from walking the boards say at Wildwood, Ocean City or Atlantic City.  While the latter three promenades were more about the glitz, neon lights, action amusements, crowds and excitement, it might be safe to conclude that the boardwalk at Stone Harbor provided an entirely different kind of experience.

An experience that was more subdued or low-key might more aptly characterize the evening stroll along the boards of this quiet community.

The second post card image depicts the new Stone Harbor Fishing Club Pier decorated with American flags and red, white and blue bunting.  Perhaps this photo was taken at or around the time of the official opening of this private fishing pier at 86th Street and the ocean front in 1921.  It is known that a group of 50 men, each of whom had contributed to the actual cost of constructing this pier.  Extending some 500 feet from the boardwalk, this pier would be destroyed just 23 years later by the Great Atlantic Hurricane of 1944.  Shown here is a fisherman posing at the entrance to the pier.  It should be mentioned that this particular post card is not often seen due to its relative scarcity.

Lastly, the third post card in this small group is another hard to find item.  Titled “A Happy Group on the Board Walk”, we see 14 adults and a youngster posing for this photo on the Stone Harbor boardwalk.  In the background is what would become the highly recognizable building and ocean front apartments, formerly known as the Casino, located at 96th Street.  This building was destroyed in the storm of 1962.  This Perkasie, Pa. bound card was postmarked on August 10, 1922 and a woman by the name of Aunt Alice writes the following message:  “Boys are having a fine time.  Uncle  Eugene P. Mildred went fishing today.  Expect fish by supper.  Everybody is well.  Boys dug deep holes in the sand.  Bathe every day.”  Accordingly, we can surmise that another great time was had by vacationers at Stone Harbor, N.J.

It should be noted that all three of these post cards were produced by the well-known S.K. Simon located at 21 East 4th Street, New York. 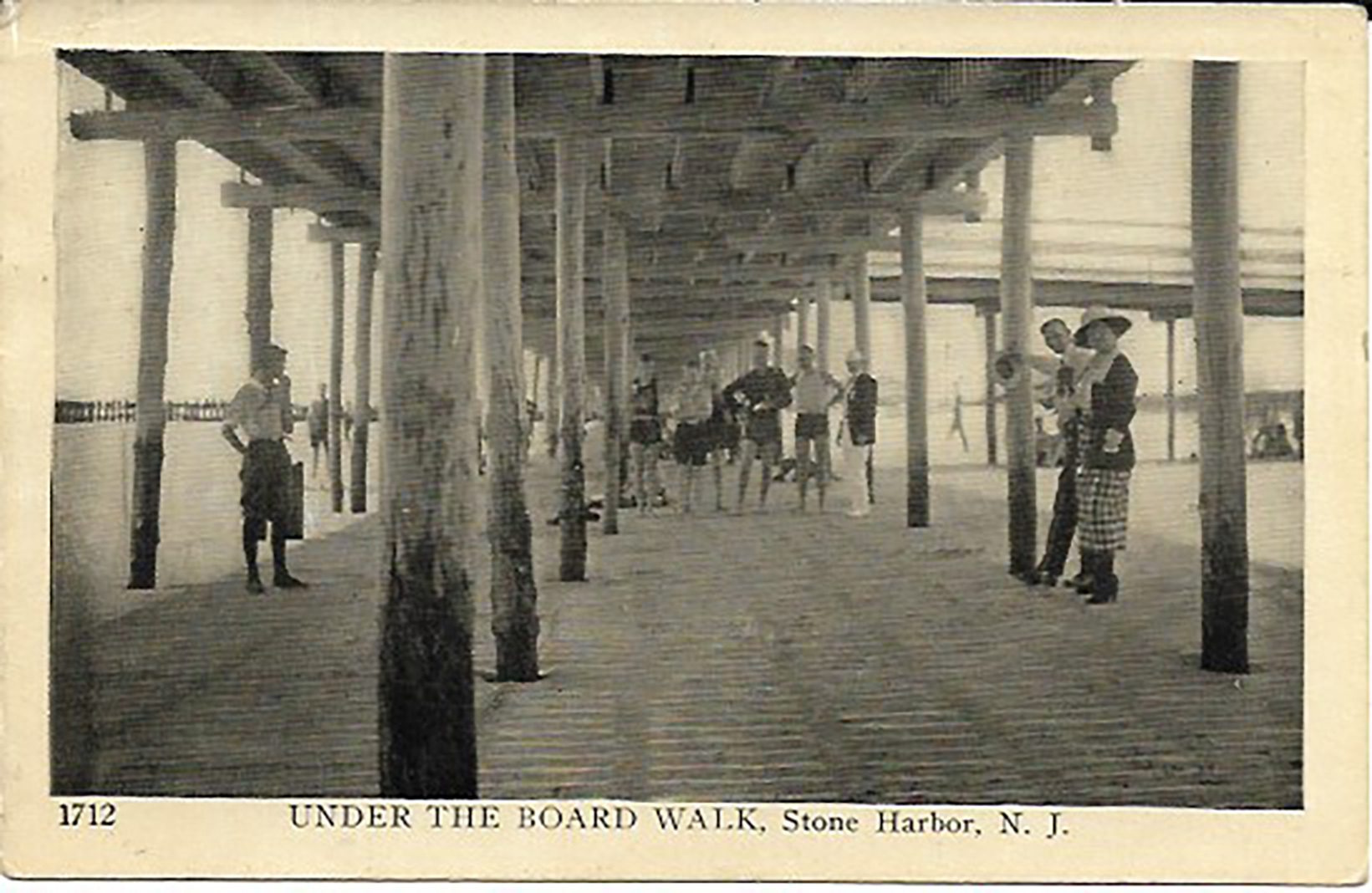 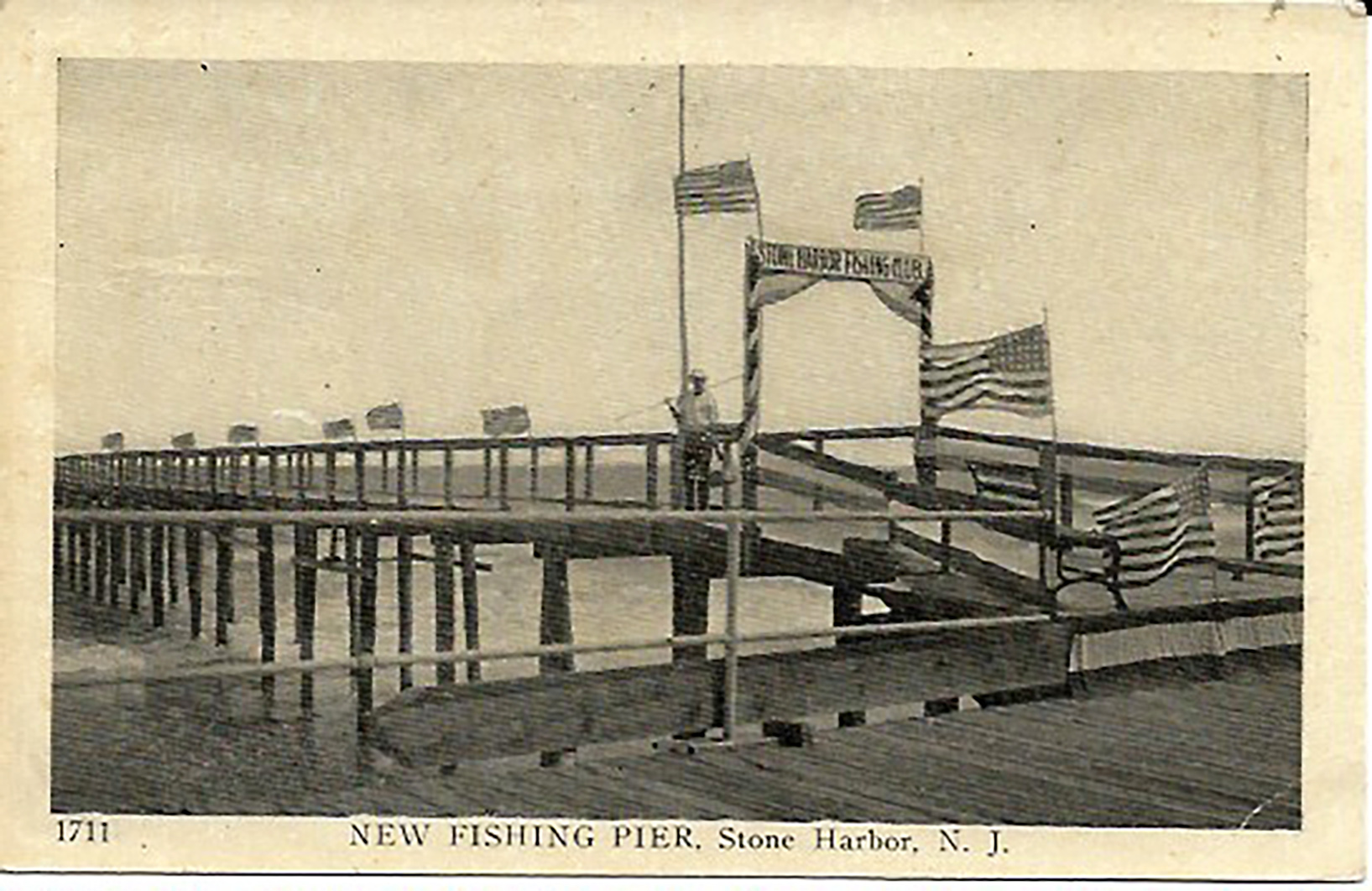 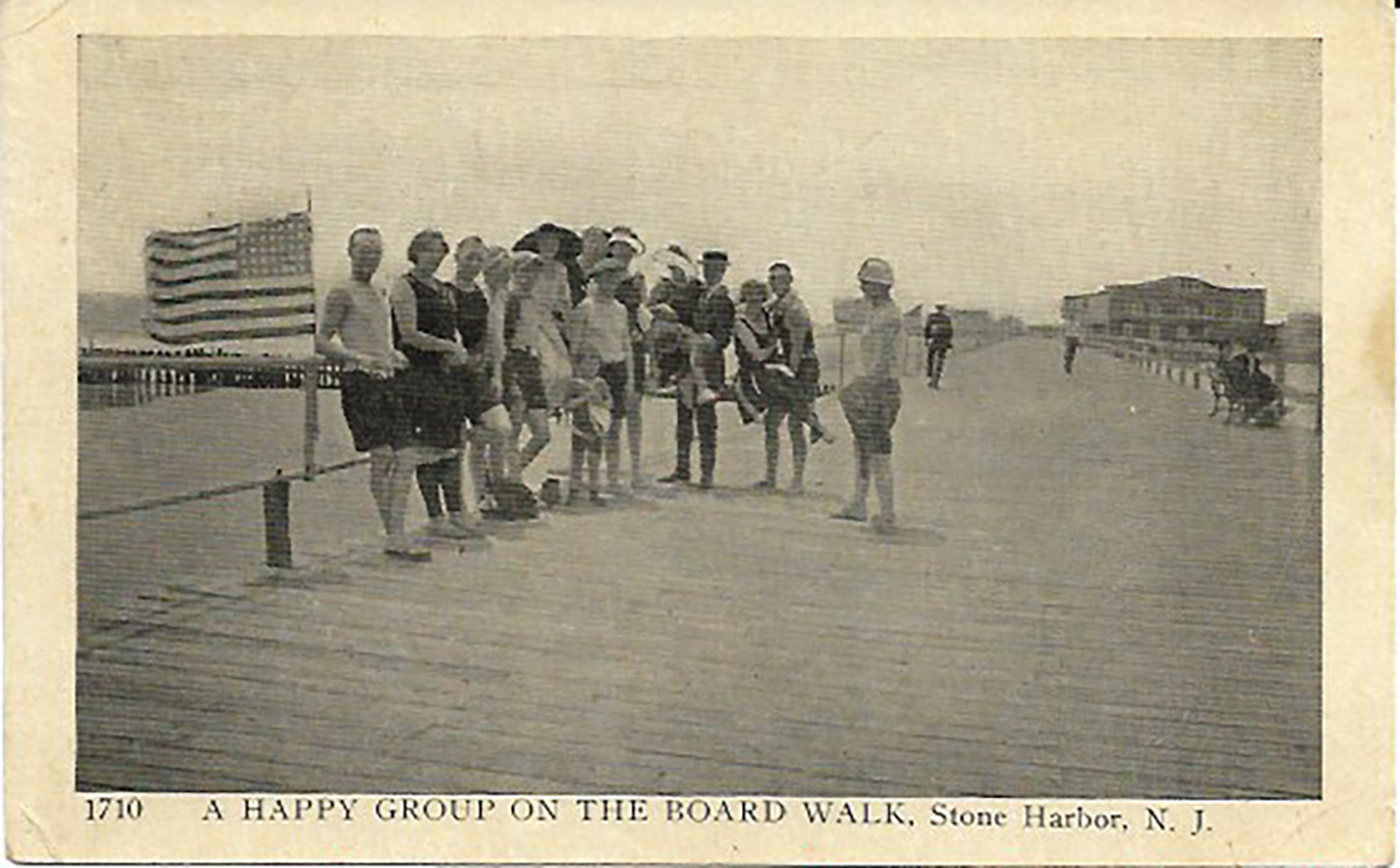